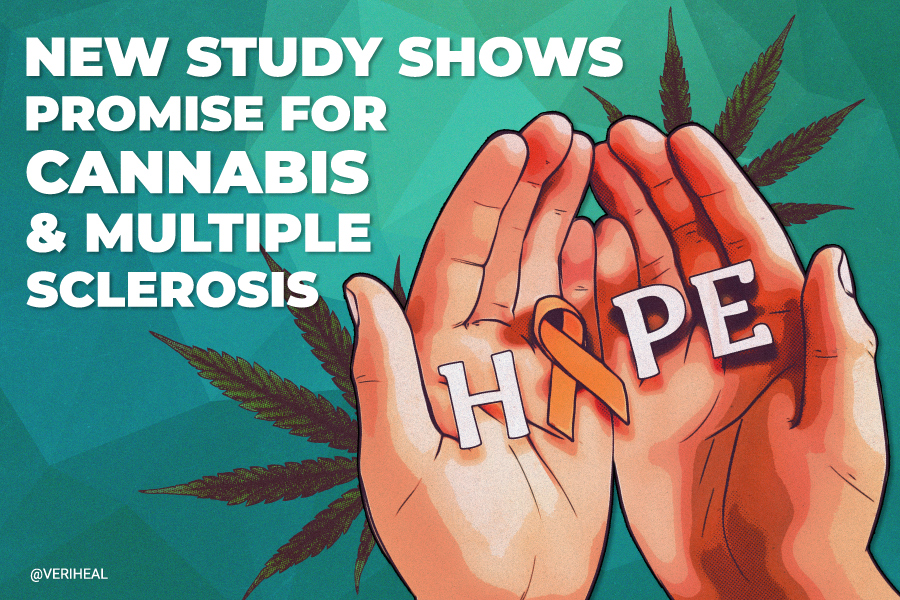 Multiple sclerosis (MS) is an autoimmune disease that can have very serious implications for those living with it. The disease is chronic and rather unpredictable but can significantly decrease the quality of life for the current estimate of 2.3 million people worldwide who have been diagnosed with MS. Now, a new study has found that medical marijuana (MMJ) shows promise as a treatment for MS.

While cannabis’ potential to assist with MS has been known for some time now, it’s important to bolster previous findings with expansive research. As with many other conditions, there is a lack of research regarding the use of MMJ as an alternative treatment to relieve symptoms of MS.

The Need for Better MS Treatment

The study’s researchers, who voiced concern about the current pharmaceutical treatment for MS, looked at the neurological benefits, clinical challenges, and neuropathologic promise of medical cannabis for MS. They stated in their report that while treatment for MS has come a long way and improved life expectancy for MS patients, the remyelination is still falling short due to neuropathologic deterioration and relapse in individuals with MS.

The current therapeutic strategies to treat MS include immunomodulation and remyelination. The researchers suggest that the cannabinoids in MMJ can assist with the treatment of MS, contributing “add-on immunosuppressive, analgesic, neuroprotective and remyelinative effects.” To improve the validity of their research, the team did a systematic review of studies that have been published since 2007 on cannabidiol (CBD) and tetrahydrocannabinol (THC) with regard to MS.

The review found that MS progression is difficult to prevent. In a survey of 5,481 MS patients, 47% considered using MMJ, but only 20% spoke with their physician about it. Of the surveyed patients, only 26% reported using it for symptoms. These numbers suggest that MS patients may not be using cannabis as a result of its illegal status or fear related to the negative social stigma surrounding the plant.

The researchers then conducted their own animal-model study in which cannabinoid treatment was found to “reduce neuroinflammatory infiltration and improve hindlimb spasticity” as well as confer neuroprotection. In their review of older studies and research, they also found that cannabis has the potential to “ameliorate [to improve] clinical progression” and “downregulate proinflammatory T cells.”

Perhaps more significant is the fact that cannabinoids seem to promote remyelination—which was previously mentioned as an aspect of MS treatment that frequently falls short.

The Significance of Remyelination

Remyelination refers to “the phenomenon by which new myelin sheaths are generated around axons” in the central nervous system (CNS). In conditions like MS, the myelin sheaths are significantly reduced as a result of pathological loss caused by the condition.

Myelin sheaths can be found in the CNS as well as in the peripheral nervous system (PNS) and act as the protective layer that wraps around the axons of neurons in order to insulate the neurons and increase the number of electrical signals being transferred. When myelin sheaths are damaged or lost, the ability to transfer, or transmit, electric signals quickly and efficiently along the nerve cells begins to slow down, leading to diseases such as MS.

The study’s researchers state that the therapeutic promise of MMJ for MS is linked to the “multifunctional capacities of the endocannabinoid receptor system in neuroprotection, regulation and remyelination in addition to anti-inflammatory effects.” Additionally, it is suggested that the combination of cannabinoids (such as THC and CBD) can be “comparably as effective for short-term symptomatic relief” as the conventional pharmaceutical treatment options but without as many adverse side effects.

Currently, MS cannot be cured, which is why symptom management is the best course of action. However, the National MS Society explains that advances in treating and understanding MS are being made every year and that there is hope for “moving research closer to identifying a cure.” If you’re an MS patient and are interested in including MMJ in your treatment, talk to a medical cannabis doctor about determining a wellness plan that meets your needs.