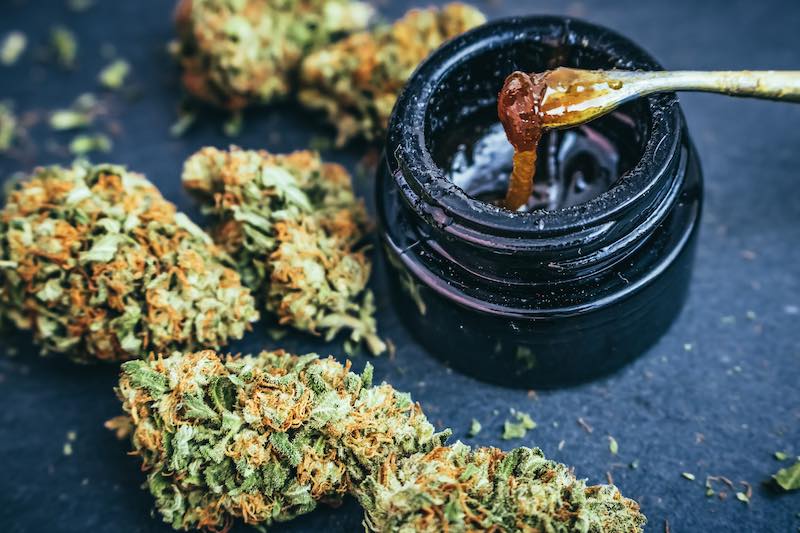 Cannabis is consumed in many forms. As of late, the popularity of cannabis concentrates is on the rise. Concentrates are exactly just that. It is cannabis that has been processed to accumulate all of the terpenes and other constituents into a more potent product. There are several methods of extracting these compounds that can then yield a variety of different kinds of concentrates, each with their own individual characteristics. Let’s explore.

Why Would People Use Concentrates

Many often find smoking cannabis flower to be harsh on their lungs or are put off by the unpleasant charred chlorophyll flavor it leaves behind. Oils and extracts can provide relief from that. Extractors are able to preserve the tasty terpene profile in the process of removing the organic matter that gets burnt off during combustion. Some also appreciate the stronger potency of cannabis concentrates. If you compare cannabis to alcohol, equate smoking flower to having a beer whereas smoking concentrates is similar to taking a shot of liquor. It’s also common for consistent users, especially those that smoke flower, to quickly develop a tolerance to THC. Naturally, users make the move on to concentrates because of the better taste and smells, as well as the stronger potency.

Solvent-based extractions use chemical solvents such as ethanol, CO2, butane, or propane to strip cannabis flower of the resin. Because chemical solvents are highly flammable, extractors use what’s called a “closed-loop” systems to ensure that there is no exposure. This avoids risks of fire, over-pressurization or explosion.

After a solvent has passed through the flower and collected the cannabinoids, the resulting product is referred to as ‘slurry’. Slurry is a mix of cannabinoids and residual solvent. The appearance can vary depending on what solvent is used. In order to process the slurry into the finished product, it needs to be purged.

In any solvent-based extraction, purging is required to rid the product of any leftover solvent. Purging can be done through a variety of methods such as evaporation, vacuuming or hand-whipping. Each method produces a different end product and signature consistency.

Wax is the most well-known type of concentrate. It’s made by blasting plant material with a solvent using a closed-loop extraction system. The slurry is then heated at low temperatures and whipped to remove all residual solvent. Because the product is whipped by hand, it gains airy peaks just like whipped cream. Wax is generally dry and notably more crumbly than its counterpart budder. Budder is essentially wax with higher moisture content. The consistency of budder is oily and malleable, while wax concentrates are crumbly and solid. Colors will range from a variety of amber shades complete with a milder aroma and flavor profile.

Live resin is made much the same way as wax, however, the starting product is frozen fresh plant matter. The finished product has robust terpene and cannabinoid profiles that resemble the qualities of the live plant. Because of this, it has strong aromas and flavors that are similar to the live plant. The appearance ranges in color from light amber to yellow-gold and has a moist, shiny looking appearance.

Known for its distinct similarity to diamonds, THCA crystalline is a pure, refined product that is created by using solvent-based extraction methods. THCA crystalline looks like a fine powder, but when left to properly form, large crystals appear. Consuming pure THCA is a different high than most because it is incredibly potent and there is little to no terpene content. THCA diamonds are usually mixed with high-terpene concentrates to form “sauce”.

Once the slurry is collected onto parchment paper, it’s placed in a vacuum oven for purging. The shatter starts to take shape and slowly spreads across the paper and can take anywhere from 45 mins to a full day to achieve optimal consistency. Sometimes, if certain steps in the extraction process go wrong, shatter can have a “taffy” texture. Taffy is closer to budder in its consistency and stability. Shatter ranges in color from light to dark amber and is high in terpene content. High terpene profiles result in strong aroma and flavor.

Distillate is a newer development and uses high tech equipment to vaporize THC and CBD within the flower. Then, it cools the vapor into collection beakers. This process is continuously repeated to create pure cannabinoids without any residual solvents or organic matter. The process of distillation leaves little terpene content. However, terpenes are often re-added to create specialized flavors.

Much like shatter production, the slurry for pie crust/honeycomb is collected onto parchment paper and placed into a vacuum oven for purging. After, the concentrate patty is pressed. This turns it from a shiny shatter looking substance to more of a cookie crumble, honeycomb look. It has an amber appearance with strong flavors and aromas.

Non-solvent extraction processes typically use ice to freeze cannabis flowers to sub-zero temperatures, and then agitating the resin glands to detach from the flower. Sometimes heat and pressure are used as an extraction method as well.

Non-solvent concentrates are considered a healthier form of concentrate due to the absence of solvents. However, all medical and legal solvent-based concentrates produced are purged and tested extensively to ensure residual levels are in accordance.

Solventless extraction processes result in products that have higher potency than solvent-based extractions. These remain popular with consumers who care about what chemicals they’re ingesting. Because there are no chemicals introduced to the process, the chemical structure of the plant remains unaltered, resulting in rich and complete terpene and cannabinoid profiles.

Kief is the simplest and most traditional type of concentrate available. The process used to extract it typically involves cannabis flower filtering screens or tumblers. By rubbing the flower against the screen, trichomes are agitated and isolated, effectively accumulating a collection of trichomes. Anyone can extract their own kief through a three-chamber grinder, which features a screen in the bottom level to help collect the trichomes. Kief is very fine in texture and often takes on a light brown or tan coloring and mimics the flavor of the flower it came from. It can be used on top of a bowl or consumed on its own. As mentioned earlier, this form of cannabis is more potent because the majority of cannabinoids and terpenes are found in trichomes.

Live kief is made from fresh-frozen flower. The plant was cut at harvest and immediately frozen to preserve all of the cannabinoids and terpenes of the live plant. After a quick liquid nitrogen bath, live kief is extracted through agitation. Live kief is known for its more potent, flavorful, and aromatic products.

Bubble hash is a non-solvent product made using ice, water, and fine micron bags to isolate the trichomes and filter out plant material and other waste. Then it is left to dry in the dark for about a week. Once dried and solidified, it’s ready for use. Producing bubble hash is debatably the safest extraction technique known to man.

Producing rosin involves the use of high heat and high pressure on bubble hash to isolate the resin from trichome heads to create a solid form of resin. Rosin is debatably the easiest and safest way to make concentrates. Rosin is one of the only types of concentrate that is a direct reflection of the starting material used. That means without exceptional starting material, it’s impossible to make high-quality rosin.

The key difference with live rosin is that the starting plant material is not cured before the trichomes are harvested. Live, fresh frozen plant material is used to make the bubble hash starting material. Then heat and pressure are applied. Because there are more terpenes involved with fresh plant matter, it creates a final product that exudes flavor similar to the terpene profile of the live plant it was extracted from.

The History of Concentrates

The OG cannabis concentrate. Use dates back to 10,000 BC in China. Made by gathering an accumulation of kief or resin.

According to declassified documents, the Office of Strategic Services, or OSS (the precursor to the CIA), developed hash oil concentrate to aid interrogation of war criminals. The liquid concentrate was injected into tobacco cigarettes, as inhalation seemed to produce the most immediate results.

The precursor to dabs, hot knifing is the method where a small bit of wax is placed on a red hot knife and the resulting vapors are subsequently inhaled.

High-quality solvent-based hash oils became popular. By 2010, hash oil products made their debut at the High Times Cannabis Cup, and shortly thereafter, dispensaries were beginning to carry early versions of budders, saps, and waxes at a much more fervent rate.

Rick Simpson develops his own concoction of THC concentrates called Rick Simpson Oil (RSO) and applies it to the cancerous spots on his face and neck. According to Simpson, the spots healed within a few days.

As consumption gained popularity, the invention of delivery continued to improve. Dab rigs were developed to efficiently consume concentrates. As the act of dabbing can be overly complicated, vaporizers and vape pens became another viable option as they are discreet.

Vape pens become the center of controversy due to a string of acute lung illnesses and deaths that occurred from vaping. 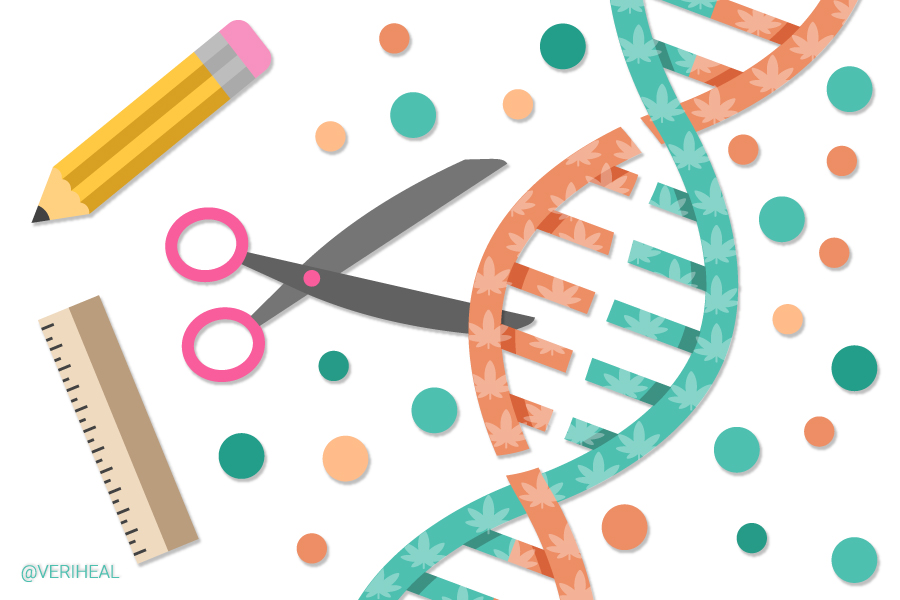 The Debate of Using CRISPR to Make Genetic Edits to Cannabis