Home News What Are Flavonoids, How Do They Work, and Are They Therapeutic?

What Are Flavonoids, How Do They Work, and Are They Therapeutic? 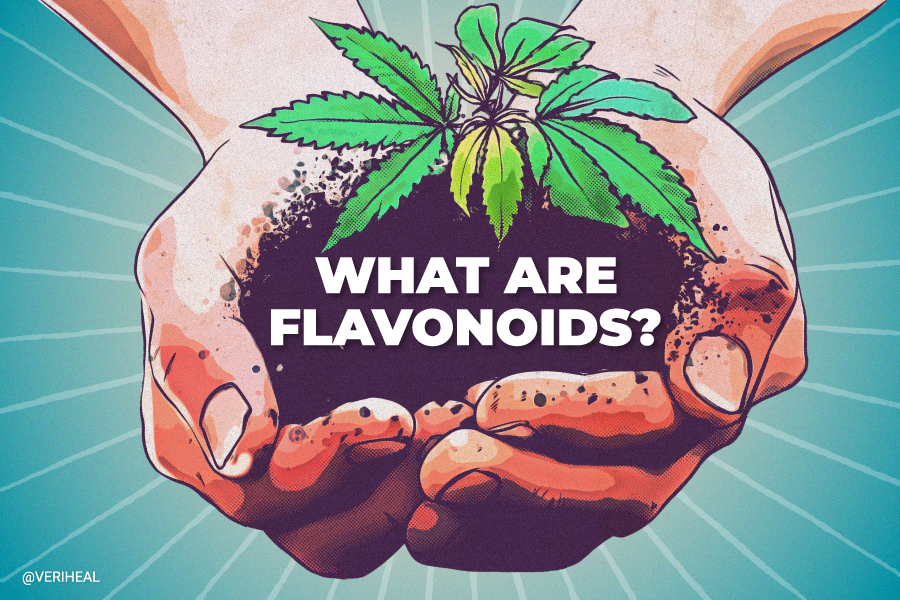 There are many beneficial compounds in the Cannabis sativa plant other than terpenes and cannabinoids. The lesser-known compounds of cannabis are flavonoids. Thus far, more than 20 flavonoids have been identified in the Cannabis sativa plant itself, including some newly discovered and unique, but there are many more which can be found throughout nature. Little is known about them, but the evidence is starting to accumulate. In order to get a better understanding of flavonoids, let’s discuss what they are, how they work, and whether or not they are therapeutic.

Flavonoids in the Cannabis Plant

A mini-review by Johanna L. Bautista et al. found that the most common flavonoids out of the 20 identified in the Cannabis sativa plant include flavone (apigenin and luteolin) and flavonol (kaempferol and quercetin). However, they did explain that flavones known as cannflavins A, B, and C were isolated in the plant. Cannflavins are flavonoids unique to cannabis plants. Cannflavins A and B were discovered back in 1986 by Marilyn Barrett.

While apigenin, luteolin, kaempferol, and quercetin may be the most common according to this study, other flavonoids found in cannabis include vitexin, isovitexin, orientin, and catechins. These latter flavonoids are all either a flavone or flavanol and are responsible for yellowish hues in plants.

Anthocyanins can also be found in cannabis. Anthocyanins are responsible for the blue or purple pigment in certain cannabis strains. You can learn more about the benefits of this type of flavonoid in this article.

How Do Flavonoids Work in the Body?

Flavonoids can help to reduce cellular activity and fight off free radicals in the body. The body faces many toxins and stressors every day, and by consuming flavonoids—whether through a specific food or cannabis—your body then becomes more adept at fighting against these toxins and stressors.

A study published in The American Journal of Clinical Nutrition assessed the probable mechanisms of action and potential application of flavonoids. Researchers found that flavonoids can increase the function of endogenous antioxidants, as well as assist the body in restoring levels of endogenous scavenging compounds when the body becomes depleted and deprived of them as a result of reacting to toxins and stressors.

The study also found that “flavonoids can prevent injury caused by free radicals in various ways. One way is the direct scavenging of free radicals. Flavonoids are oxidized by radicals, resulting in a more stable, less-reactive radical. In other words, flavonoids stabilize the reactive oxygen species by reacting with the reactive compound of the radical.” However, it should be noted that this is just the tip of the iceberg in terms of understanding how flavonoids work within the body.

Let’s consider the two most common flavonoids found in the Cannabis sativa plant—excluding cannflavins—flavone and flavonol. Is there evidence that these flavonoids are therapeutic, and if so, what benefits could an individual expect when consuming them?

The significance of these benefits cannot be overstated. The fact that these compounds contribute to the 10% of flavonoids available in the cannabis plant just makes marijuana more appealing as an alternative form of treatment for various conditions. Now that we have a better understanding of the benefits of four of the flavonoids that can be found in cannabis, let’s have a look at the benefits of cannflavins.

Cannflavins are said to share some therapeutic properties with the flavonoids found throughout nature, such as having antioxidant, anti-inflammatory, and anti-carcinogenic properties as well as—though not as effectively—acting as a neuroprotective agent and an anti-parasitic agent. Researchers from a review study published in 2020 explain that the currently most significant therapeutic benefit of cannflavins is their powerful anti-inflammatory properties.

The Chicago Tribune and Science Alert even reported on cannflavins A and B because research uncovered that they have anti-inflammatory benefits that are “30 times more effective than Aspirin.” However, as with most other aspects of cannabis, more research is needed to be certain of the benefits of cannflavins.