Home Lifestyle Why Do Some Cannabis Plants Turn Purple?

Why Do Some Cannabis Plants Turn Purple? 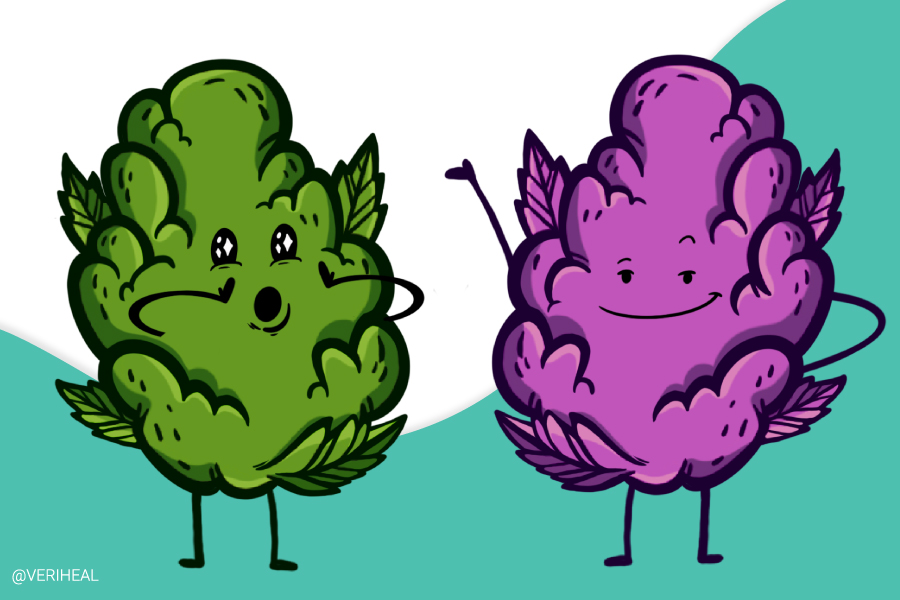 Have you ever looked at some of the cannabis plants before they are harvested, dried, and cured? If you have, you would agree that there are some very exotic and beautiful varieties of the cannabis flower, such as the purple buds. You may find yourself inquiring about why this plant is taking on a purple hue, well let us set the record straight since bad information is still circling.

When individuals engage in conversation over the purple cannabis, one may get a picture in their head of the plant, which may not be what they expect. Purple hued cannabis can present itself in lighter and darker varieties which may even appear black. Despite the discrepancies in hues, purple cannabis is no less impressive than it sounds. Before we get into why the cannabis community has fallen for the purple buds, why these buds get a purple tinge.

Why Does Some Cannabis Turn Purple?

Simply put, cannabis can turn purple due to high quantities of a compound known as “anthocyanins”. The varieties of the purple hue in some cannabis buds are dependent on how much of the compound is circulating throughout the plant. Anthocyanins are considered a colorant that is responsible for the red, purple, and blue hues, which is also present in many of the fruits and vegetables that we eat as well as in many other inedible plants.

Anthocyanins are a water-soluble compound which is present in some cannabis strains. The compound can turn the cannabis leaves and buds into a variety of purples and blues which may even appear dark green and black. However, the conditions of the plants’ growth will ultimately influence how the anthocyanins will impact the actual pigments of the plant. These conditions include pH levels, temperature, and light.

If you are trying to get your plant to turn colors, you should know that colder temperatures cause a breakdown in chlorophyll. By breaking down the chlorophyll, the plant is then allowed the opportunity to display the hues it’s been hiding. Although you should also know that the quantity of anthocyanins needs to be high in order for any color to come through at all, this is determined by the genetics of the plants. Thus, getting beautiful purple plants would mean a perfect combination of genetics and environmental factors.

What Makes Anthocyanins So Special?

Research published in 2004 revealed that not only is anthocyanins responsible for the vibrant colors in many plants, fruits, and vegetables but that it also seems to enhance the “health-promoting qualities” of the substance it’s in. This could account for why the purple buds have gained popularity in the cannabis community, aside from the fact that it is beautiful to look at too.

Anthocyanins have been used in traditional herbal medicines for many centuries by many cultures such as Native American, Indian, European, and Chinese. These herbal medicines that were rich in anthocyanin were often derived from dried leaves, berries, storage roots, and even seeds. The compound was used as a treatment for a variety of ailments and conditions ranging from hypertension, liver disorders, bladder problems to the common cold and infections.

Reports of anthocyanins’ health benefits even include improvements in vision and the circulation of blood. However, despite these medicinal benefits, researchers are unsure as to whether the apparent health benefits are due to the compound itself or whether it is due to the synergistic interactions between anthocyanins and the other compounds found in the plants.

Some Strains Which Are Genetically High in Anthocyanins:

Is Purple Cannabis Better Than the Rest?

Current research suggests that although anthocyanins may enhance medical benefits, there is not enough understanding of the compounds to definitively state that purple buds are better buds. What we do know is that purple buds are more exotic and attractive to cannabis consumers and that many consumers claim to experience more potent effects from purple buds. Professionals suggest that you do not make the hue of the plant your criteria for seeking out which strain to consume as some suppliers will sometimes use dyes to change the hue.

You are wrong, Low N triggers a response for anthocyanins not only in Cannabis plants, because it also reduces the production of chlorophyll and plant protoplasm.

Good day Rayne, thank you for taking the time to read this article. Low nitrogen can contribute to the anythocyanin accumulation but perhaps you would like to identify which aspect you feel is “wrong”. This article is based on research but we are always looking to expand our knowledge. Looking forward to engaging with you.