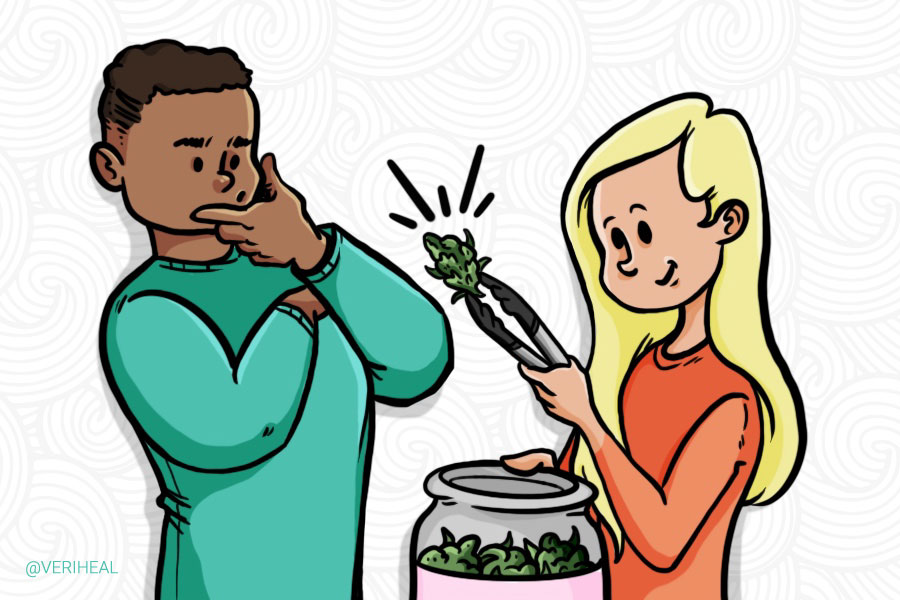 One of the first things that many of us do when purchasing cannabis flower is to smell it, and this is for a great reason. The smell of cannabis flower can tell you many things. For example, if it smells like fresh-cut grass, it could mean that it was improperly cured and that the naturally existing chlorophyll in the plant is turning to ammonia. Another example is that of cannabis smelling like wet clothes or dirty water. This could be a sign that mold or mildew is present, as the terpenes that naturally exist in the cannabis plant does not result in either of these smells.

The most common aromas associated with quality and properly cultivated and cured cannabis are described as being earthy, woody, fruity, and citrusy by most. Some specific strains may also put off a smell that is described as being like diesel, hence the name of some strains containing this description.

Like the smell of cannabis flower, the way it looks can also say a lot. When purchasing cannabis flower, you can determine a lot of things by simply observing the bud. Does it have a frosty appearance? If so, it is likely tasty and potent as it is rich with trichomes. Does it have red hairs? Are they in abundance? If so, this could be a good or a bad thing depending on the cultivator.

Some strains naturally have what are commonly described as being red hairs. Their existence is what stands some strains apart from others, however, when they are found in great abundance, it could mean that the cultivator is using plant growth regulators, also known as PGRs during cultivation.

According to Humboldt Seeds, “Due to their apparent toxic nature, many have subsequently been banned for use on consumable food crops since the 1970s and are regarded as pesticides in many countries.” Cannabis flower that has been cultivated us PGRs are commonly dense and tight in appearance.

When utilizing cannabinoid-based therapies to treat conditions or diseases, it is vital for many patients to tailor their relief based on the benefits of particular terpenes and cannabinoids. By looking at the cannabinoid and terpene content in a specific strain and offering of cannabis flower, you can better tailor your experience to meet your needs.

Cannabis testing is much more than just terpene and cannabinoid content. Knowing that there are no residual solvents, pesticides, or heavy metals in your flower could mean the difference between relief or illness.

What do you look for when purchasing cannabis flower? Do you have other suggestions for patients or consumers? If so, leave us a note in the comments below!

Very Interesting, what is some of the names for back pain and breast cancer.