Home Lifestyle Could Cannabis Save The World’s Dwindling Bee Population?

Could Cannabis Save The World’s Dwindling Bee Population? 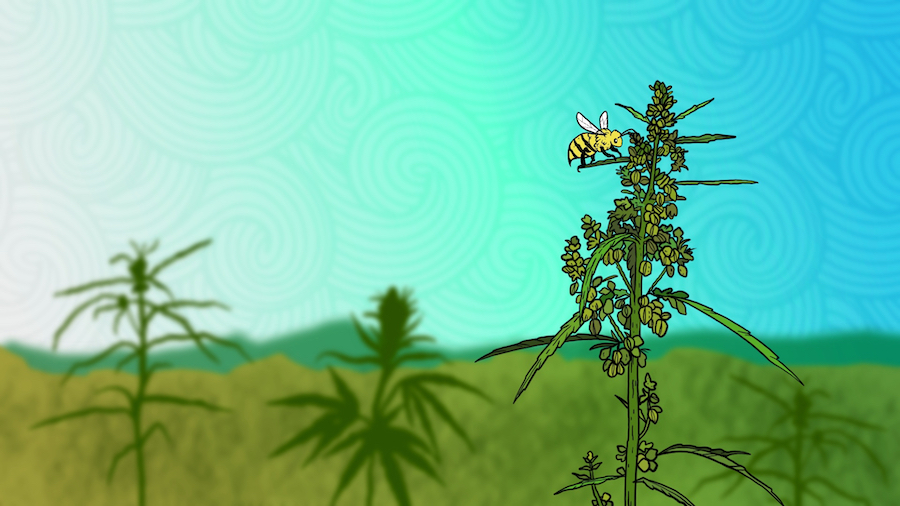 Bees provide essential functions vital to the survival of humans, plants, and animals. Their numbers are dropping dangerously low and many professionals and scientists are warning people to get proactive with protecting and saving the bees. If we are to save the bees, we need to know why they’re important, how they got to such low numbers and what we could do to help save their species, and subsequently other species too. Recently there has been a lot of buzzing around the notion that cannabis can help save the bees. Let’s buzz right into all of it.

Why are bees important for human, plant and animal survival?

Simply put, bees allow plants to reproduce through pollination. These plants are important to the food system. Those plants feed animals and humans, it also feeds and nourishes the animals we consume for meat. Bee pollination of plants also ensures that the survival of those plants continues.

If the numbers of bees reach depletion, there will be a huge disruption in our food chain which could lead to severe suffering. Yes, there are other pollinating insects, but bees are the worlds’ most important ones. One-third of our food relies on bee pollination alone.

Bees pollinate more than 100 types of crops and are also monumental in the pollination of grass that fee cattle. Without them, there would be less beef, milk, and cheese. Bees are also important for providing us with plants producing fruits, nuts, and vegetables.

Although these busy bees provide us with those contributions which are priceless, they also contribute 3-digit millions in revenue to the economy as a result of their hard work.

Why is the number of bees dropping so drastically?

There are three main reasons that are responsible for the loss of population:

How can we save bees in our own communities?

Can cannabis help save the bee species?

There have been two very exciting developments regarding bees and cannabis recently.

The reason this is so exciting is that the cannabis industry can provide the bees with a source of pollen to help alleviate their dying numbers while the industry receives a yummy new product, natural cannabinoid dosed honey.

Cornell University conducted a study that was published in Environmental Entomology in December. It found the same things as the study published by Colorado State University almost a year ago. They both confirmed that bees love cannabis… almost as much as we do.

Cannabis can support at least 16 different varieties of bees!

The catch with this cool notion of cannabis saving bees is that the bees basically ignore female cannabis plants. Female cannabis plants are the ones we like to grow as they’re the ones we use for consumption. However, the male plants, which we keep in separate locations to our females most of the time, are highly attractive to bees due to its flowers and plentiful pollen sacks.

Basically, the male plants we keep around to breed our cannabis plants and seeds will allow the bees their accelerant to thrive as a species.

Imagine if growers with fields of cannabis allowed bees access to their male plants… we would have so many more bees as growers generally opt for less harmful but effective pesticides as cannabis is commonly used for consumption. I say bring on the cannabis and bee duet farms! As for the cannabis honey made from bees…Keep your eyes buzzing on our website for the article exploring honey made by bees that have consumed cannabinoids.