How Does Cannabis Help Manage Type 1 and Type 2 Diabetes? 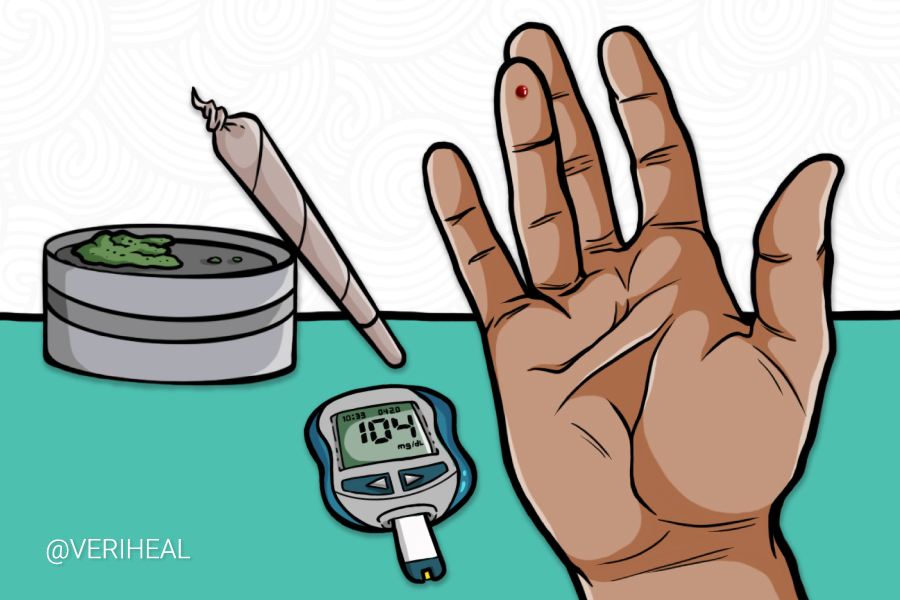 Diabetes is a common condition experienced by people all over the world. It can be explained as a disease in which the body’s blood glucose levels are too high as a result of the food that is eaten. Persons suffering from diabetes have an inability to turn the glucose from food into energy. This can be due to having an insufficient quantity of insulin or the insulin that the body produces does not work as it is supposed to, which also makes up the two main types of diabetes. Despite conflicting evidence on the role of cannabis in Type 2 Diabetes, research has shown that there are benefits for both types who make use of cannabis treatments.

Both of the main types of diabetes are chronic and affects the glucose that is used in order to fuel the cells in your body. In order for your body to fuel itself with the glucose, it needs a key, which is insulin.

People suffering from Type 1 Diabetes have an inability to produce insulin. This means that they have the ability to get glucose from food but can’t use it to fuel the cells because it doesn’t have they key to-do so.

People suffering from Type 2 Diabetes have a broken key. This means that the body does not respond to the insulin produced as it should. In later stages of this type, the body often ends up not making enough insulin.

Type 1 Diabetes is caused by the destruction of the insulin-producing cells in the pancreas by the immune system. The immune system is responsible for fighting off invaders such as viruses and for persons with this type of diabetes, those healthy insulin-producing cells are mistaken for being invaders. Researchers and medical professionals are still unsure as to exactly why the body would attack its own cells.

Type 2 Diabetes is caused by a resistance to insulin. The body still able to produce insulin but remains unable to make use of it. When persons have Type 2 Diabetes, the body will try to compensate for the ineffective insulin by producing more until a stage when it starts producing less. Since these persons are unable to make use of insulin, the glucose in the body will accumulate in the bloodstream.

There is a wide variety of evidence displaying the benefits of cannabis on disorders, illnesses, and conditions such as helping with the management of pain as well as assisting in slowing down the progression of what you are dealing with.

Diabetes is one of the most prevalent and challenging conditions to treat, with around 9% of the worlds’ adults struggling with it. Besides contributing to early deaths, diabetes can also lead to kidney failure, blindness, heart attacks, and strokes, as well as lower limb amputation. Conventional methods of treating diabetes can also leave the patients with hefty bills, placing more strain on them.

Since diabetes is deadly, debilitating as costly, the need for more effective, less costly, and easier to access treatment grows increasingly. Research investigating the relationship between cannabis and diabetes has shown promising results, but a lack of large-scale testing still needs to be done.

The Diabetes Council has stated the potential benefits between cannabis and diabetes lies in the anti-inflammatory properties of cannabis compounds. So far, research that has been conducted has implied that cannabis consumption can assist with the stabilization of blood sugars, preventing inflammation of nerves, over time lowering blood pressure as well as keeping blood vessels opened and improving circulation. Some of the research even goes so far as to suggest that cannabis use for diabetes is more effective than existing diabetes medication.

The Diabetes Council has done the research for this type and found that Cannabidiol (CBD) can delay the onset of Type 1 Diabetes. They have also found that Tetrahydrocannabinol (THC) can suppress the autoimmune response which then reduces the insulin needed during conventional treatment.

The Diabetes Council also explains that CBD can fix an imbalance in the endocannabinoid system in the body. This imbalance can make it harder for people with this type to lose weight which is important when treating this type. CBD also has the potential to reduce insulin resistance, which is one of the main problems with this type of diabetes.

Cannabis for diabetes should not be considered as a cure-all but its benefits on the condition offer safe, less expensive, and easily accessible means for treating and managing the disease. The anecdotal success of cannabis as a treatment for diabetes as well as the current research on its effectiveness warrants further wider and more comprehensive research.