Researchers demand higher quality cannabis. The DEA promised a few years ago it would let more people grow cannabis for research purposes, but it wasn’t until late last month — as the country locked down under safer-at-home orders to combat the coronavirus pandemic — that the agency unveiled a plan for how it would do that. Under the DEA’s newly proposed rules, the agency would allow more scientists and companies to grow cannabis for research, but they would have to turn it over to the DEA, who would then distribute to scientists.

No One Expected Such Difficulty For Cannabis Research

Most researchers never envisioned that a legitimate attempt to study cannabis’s potential benefits would become a decade-long quest involving fights with universities and the federal government, and attempts to uncover confidential legal documents. Yet this is the complicated maze scientists studying cannabis have been navigating for years. The DEA still classifies cannabis as a Schedule I drug — a restrictive category reserved for substances believed to have no medical value and highly susceptible to abuse.

The DEA has repeatedly said it won’t support reclassifying cannabis because there aren’t well-controlled studies or scientific evidence approved by the Food and Drug Administration to show medical benefits. Yet scientists say that if evidence of those benefits is ever going to exist, they need to put real-world cannabis — not what’s made available from the University of Mississippi — through these studies. The menu from the Ole Miss farm — which is largely confined to smokeable flower and THC extract — excludes high-potency products like edibles, shatter or wax.

This sets up a paradox, in which practically no one can show through an FDA-approved clinical trial that the cannabis products on the market are safe or beneficial because researchers can’t legally study them. In 2016, following requests from scientists, the DEA announced that it would allow more facilities to cultivate cannabis for research. Jeff Sessions then became US Attorney General and in 2017 he halted the government’s plans to allow more growers. When members of Congress later pressed Sessions on the pending applications, he suggested that allowing more than one producer could put the country at risk of violating the U.N. Single Convention on Narcotic Drugs, a 1961 international treaty. 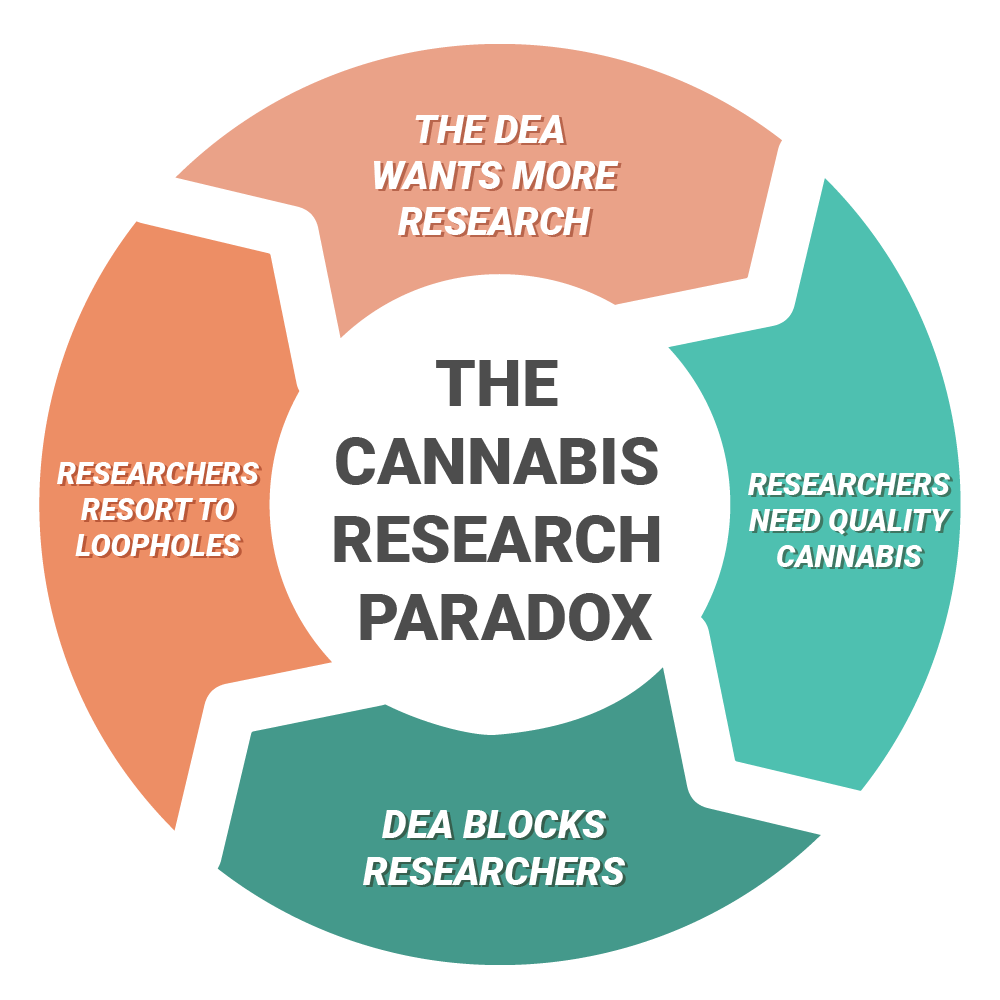 Universities have gotten creative in their methods to legally study cannabis without procuring it from the DEA. For example, Washington State University researchers are conducting a study in which they ask participants to buy cannabis at a legal dispensary, go home and smoke it, and then take an Uber or Lyft to the lab to give a blood sample. “Controls To Enhance the Cultivation of Marihuana for Research in the United States” is a proposed Rule by the DEA introduced on March 23, 2020.

Finally a Way to Move Forward

The new rules proposed by the DEA were the result of an opinion written by lawyers in the DOJ’s Office of Legal Counsel in June 2018, while Sessions was still attorney general. That opinion was kept secret until scientists filed a lawsuit in early March against the department, which settled with the release of the document. The proposed regulations, according to the spokesman, “could permit a greater range of products available for scientific research.”

Is This a Telltale For What’s to Come?

When is my card comeing in the mail .

Please call our customer service number (1-833-663-7284) or utilize our chat support. We are unable to answer this type of question in our blog comments.

I have been diagnosed with depression/anxiety and I have PTST and i recently traveled to Illinois. I visited a cannabis store there and it was an amazing because I bought flower and the THC capsules and the flower helped me so much with all 3 of my diagnosed issues and the capsules helped me with my insomnia. I have been to a lot of Dr.s and i could never get the proper medicine for my anxiety and my insomnia because I am a recovering addict and now I am trying to get a medical card in VA and now because of this pandemic, things are put on hold. I think if people just understood how much THC helps people, they would get a move on it and not put it on hold. I think we all have been waiting long enough for some kind of actually help, I know at least that’s how i feel and i’m sure there are thousand more who feel the same.

I haven’t received my card in the mail yet???

Please call our customer service number (1-833-663-7284) or utilize our chat support. We are unable to address this type of issue in our blog comments.