Home News Study: Women Who Consume a Lot of Cannabis Have Lower Risk of Diabetes

Study: Women Who Consume a Lot of Cannabis Have Lower Risk of Diabetes 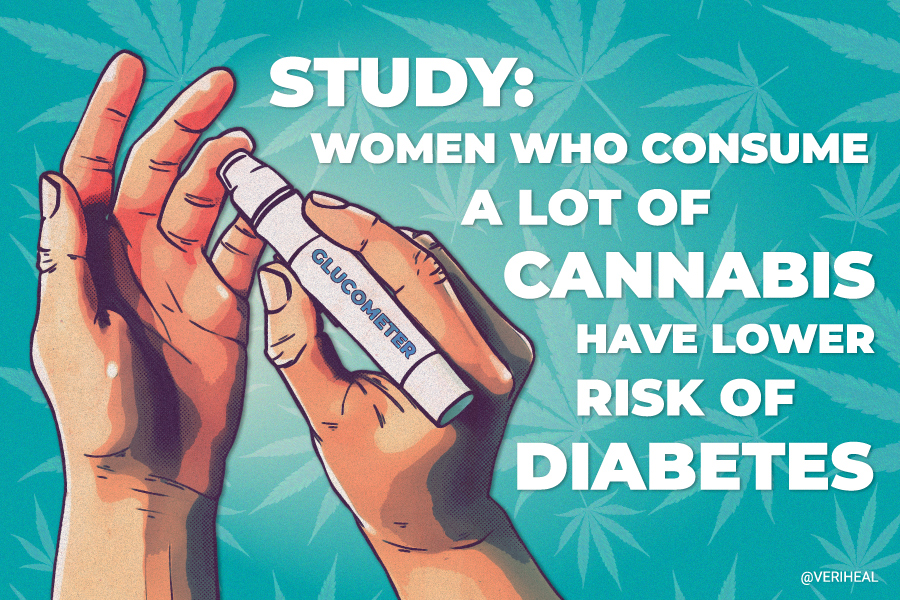 A groundbreaking research initiative could completely transform the future of diabetes treatment. Well, for females, at least. Published in Cannabis and Cannabinoid Research, the investigation suggests that female adults who consume cannabis “heavily” tend to have a reduced risk of developing diabetes.

A pool of 15,000 people partook in the study, which saw researchers pinpoint each individual’s “diabetes status” by assessing levels of fasting blood glucose, plasma glucose, or hemoglobin A1C levels. “Light” consumers was the definition given to diabetes patients who smoked cannabis less than four times per month, whereas those who smoked the plant more than four times a month were deemed to be “heavy” users.

Although experts remain perplexed about the root cause(s) of the varying influence that cannabis has on both females and males, they have conjectured a theory. That theory goes as follows: Two of the cannabis plant’s primary constituents—cannabidiol (CBD) and delta-9-tetrahydrocannabinol (THC)—appear to impact receptors deep within the endocannabinoid system (ECS). As a result of this, glucose disposal is improved.

The ECS is an intricate network of receptors and transmitters. It is contained within the body’s nervous system, which is responsible for regulating a broad spectrum of biological processes. One of those processes is in fact glucose disposal, thus proving the important role that the ECS has to play in cases of diabetes.

Scientists and researchers already know that the ECS works differently in males and females. Because of this, the outcome of its functioning varies widely. Nonetheless, something is for certain: Cannabinoids could work more effectively than traditional diabetes medications.

Specifically, patients who endure the symptoms of Type 1 diabetes may benefit from CBD. In fact, research released by The Diabetes Council suggests that the non-psychotropic cannabinoid might even minimize the occurrence of the disease, in addition to delaying its onset.

Separate research indicates that THCV and CBD may improve metabolism and blood glucose in human and animal models of diabetes. Moreover, a 2016 study discovered that THCV and CBD reduced blood glucose levels and boosted insulin production in type 2 diabetes patients. This, the researchers say, indicates a “new therapeutic agent for glycemic control.”

Past Research Supports Use of Cannabis for Diabetes

Despite cannabis’ federally illegal status, which has acted as a major roadblock in terms of medicinal cannabis-focused research initiatives, an abundance of existing studies prove the plant’s benefits for diabetes patients. For example, animal studies like this one hypothesize that CBD treatment(s) could offer major protection from diabetic retinopathy, a complicated side effect of diabetes that affects the eyes.

Even more promising are the findings of a research effort carried out by a team of epidemiologists at the Beth Israel Deaconess Medical Center, the Harvard School of Public Health, and the University of Nebraska College of Medicine.

Collectively, the research team learned that cannabis consumers have depreciated insulin levels compared to non-consumers, not to mention better BMI scores and waist sizes. The novel study, which was published in The American Journal of Medicine, sets the foundation for future research efforts.

“Previous epidemiologic studies have found lower prevalence rates of obesity and diabetes in marijuana users,” said lead investigator Murray Mittleman, MD, in a press release. “Ours is the first study to investigate the relationship between marijuana use and fasting insulin, glucose, and insulin resistance.”

Cannabis has been praised as a potential treatment option for diabetes by the American Alliance for Medical Cannabis (AAMC). According to the organization, the plant—which possesses natural antioxidant properties—may prove useful for reducing arterial inflammation, stabilizing blood sugar levels, and easing neuropathic pain.

Furthermore, cannabis works as a vasodilator, which means that it can naturally help to keep blood vessels open. This unique trait of the green plant may gradually contribute to lower blood pressure, less gastrointestinal pain/cramping, and improved circulation. One significant benefit of the latter is that diabetes patients may experience relief from muscle cramps.

More research is needed to paint a clearer picture of cannabis’ role in cases of diabetes. In the meantime, an uninterrupted text of the study, titled, “Sex differences in the association between cannabis use and diabetes mellitus among U.S. adults: The National Health and Nutritional Examination Survey, 2013-2018,” can be found in the journal Cannabis and Cannabinoid Research.