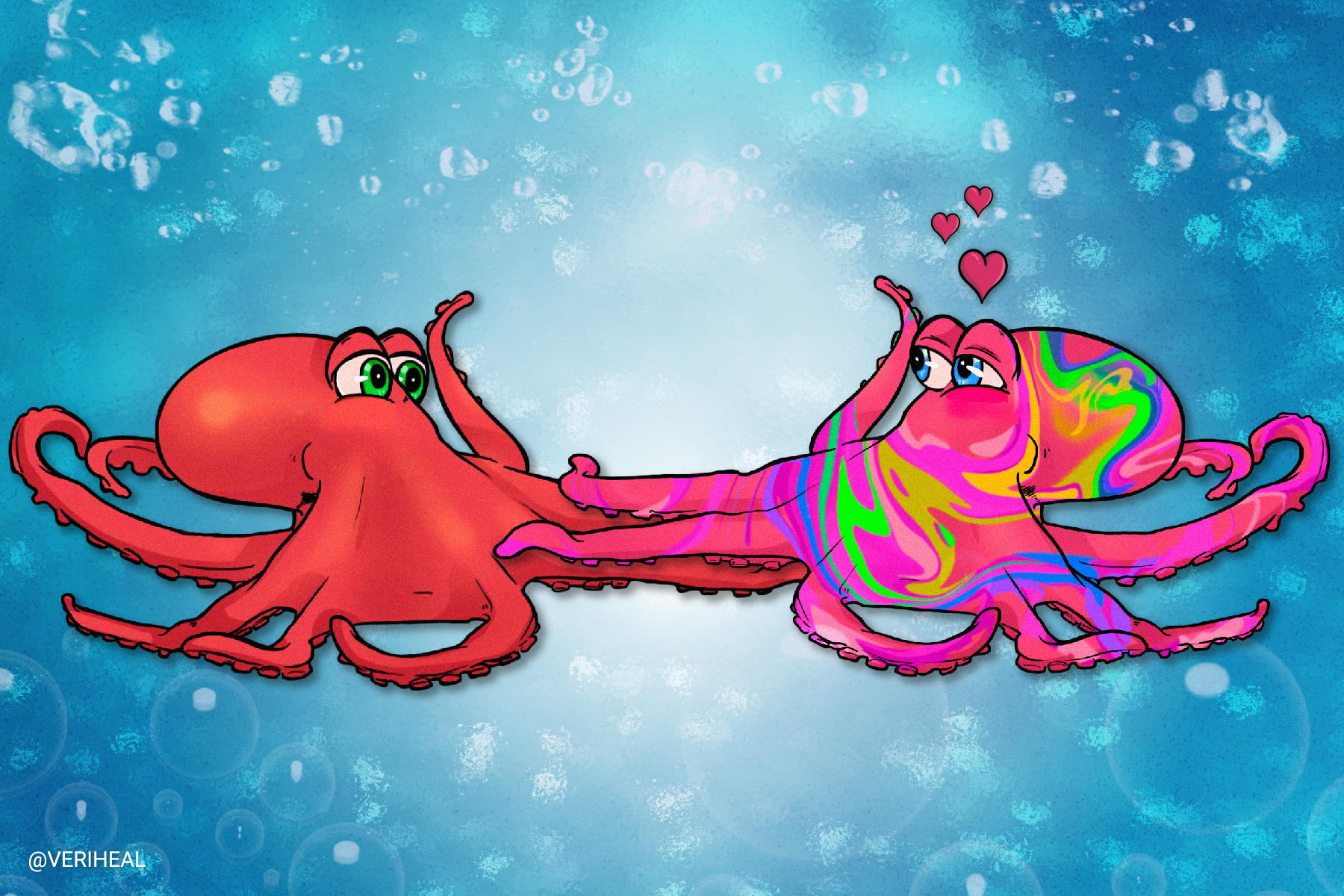 Did you know that octopuses have the ability “to use tools and navigate mazes”? This is due to the fact that they have complex nervous systems and due to the fact that “evidence suggests that ancient neurotransmitter systems are shared across vertebrate and invertebrate species and in many cases overlapping functions”. Additionally, Gül Dölen of Johns Hopkins University School of Medicine and Eric Edsinger of the Marine Biological Laboratory found that these curious creatures share the same nervous system binding sites as those used by humans. In honor of the octopuses and for the love of science, let’s have a look at that one time when scientists gave MDMA to the creatures.

MDMA (methylenedioxymethamphetamine) is a synthetic substance that is both a stimulant and hallucinogen. The effects of MDMA are said to include increased energy, distortion of time as well as enhanced and distortion of perception- including sensory perception. The NIH explains that the substance has been “described as an entactogen- a drug that can increase self-awareness and empathy”. MDMA triggers the release of serotonin, norepinephrine, and dopamine and has been approved by the FDA for experimental research in order to assess the drug as a treatment for post-traumatic stress disorder (PTSD).

Some say that MDMA is a pure form of ecstasy- which is only somewhat true. Ecstasy contains MDMA but may also contain methamphetamine, ketamine, caffeine, ephedrine, dextromethorphan, heroin, phencyclidine, and cocaine. Another drug associated with MDMA is one referred to as ‘Molly”. This associated substance is the crystalline powder form of MDMA- which are both consumed in capsule form, however, Molly is also available as a powder.

Dölen and Edsigner’s study was published in 2018 and aimed to provide insight into the “conserved role for serotonergic neurotransmission in medicating social behavior in octopus”. Understanding that octopuses and humans share “related biological hardware”, Dölen sought to see whether MDMA would cause changes in the behaviors of the creatures- especially considering their tendency to be solitary animals.

Dölen and Edsigner began their study by explaining that serotonin is a molecule that has been found to be implicated in “regulating both invertebrate and vertebrate social behaviors, raising from the possibility that this neurotransmitter’s prosocial function may be conserved across evolution”. It appears that octopuses’ neural mechanisms governing social behaviors are “suppressed outside the reproductive period”. The study provided evidence that MDMA can enhance the “acute prosocial behaviors in octopus bimaculoides”.

Before we get into what happened in the study, it is important to note that Dölen and Edsigner followed the tenets outlined by the United States Animal Welfare Act, despite the fact that these octopuses do not fall under the protection of that regulation for research and testing involving animals.

The pair of researchers placed the selected octopus in a dilute solution containing the equivalent of a low human dose of MDMA. The researchers then released the octopus into an enclosure that had three chambers. On the one side of the enclosure was an inanimate object for the octopus to explore and on the other side was a second and sober octopus. Unsurprisingly, considering the substance, the octopus under the influence of MDMA sought to spend more time with the other octopus as opposed to exploring the inanimate object however, this was dependent on the gender of the creatures.

The enclosure consisted of a glass aquarium, where the center chamber was empty to serve as the “test arena”. The study explained that whether the social object, the sober octopus, was a female and the octopus under the influence of MDMA was a male, they spend significantly more time in the social champer. However, when the social object was a male, the subject animals “spent significantly increased time in the object chamber”. Despite these differences, the results between pre-and post-exposure to MDMA still revealed an increase in social interactions.

The study by Dölen and Edsigner found that the octopuses on MDMA “sought more physical contact, extending several tentacles, whereas the sober octopuses tended to touch with just one (tentacle)”. ACS Publications, the Newscripts, reported on the study and stated that the pair of researchers found that the “octopuses swayed and become touchy-feely under the influence”.  Dölen explained that she has never seen any octopus behave like those under the influence and that “they behaved very similar to what you’d expect in a human”. One of the octopuses which received MDMA even spent a significant amount of time doing backflips.

The significance of this study was well explained by Dölen who said that this research, and similar ones to come, can provide the necessary insight into how hallucinogenic drugs such as MDMA and psilocybin can be used in the treatment of medical conditions. Additionally, she explained the octopuses can help scientists better adapt these drugs to serve medical purposes.

This study, and similar other functional studies, provides the “first functional evidence that the prosocial effects of MDMA are evolutionarily conserved” in these octopuses. Additionally, the findings of this study are consistent with the previous findings of the complex locomotor profile of MDMA as well as supporting the “entactogenic” classification of the drug. The study also explained that this research displays that the doses of MDMA given to octopuses are closely related to those which would be consumed by a human. Hopefully, more ethical research such as this can continue to provide insight into the therapeutic potential of hallucinogenic substances.

Very interesting article. Is there a video of the octopuses? I’d be curious to see how cuttlefish act.

After having a look around, there does not appear to be one on this specific study. However, I am still looking. I also think it would be interesting to see- especially to see how touchy-feely they become.