Home Research What Does Research Say About Treating Restless Legs Syndrome With Cannabis?

What Does Research Say About Treating Restless Legs Syndrome With Cannabis? 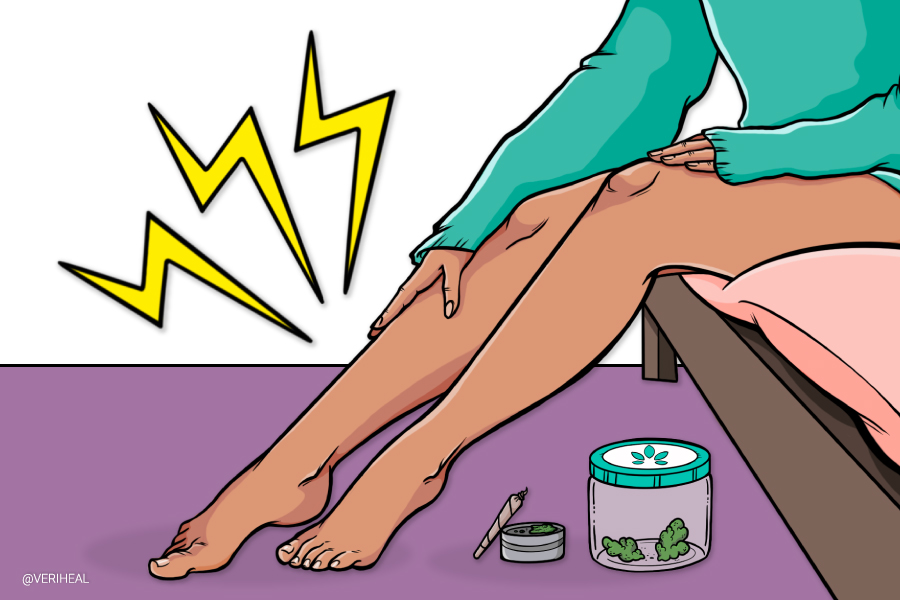 Have you ever experienced that all-consuming and invasive need to move your legs nearly every day? Statistically speaking, many of you would answer yes. The National Institute of Neurological Disorders and Stroke has estimated that Restless Legs Syndrome affects 7 out of 10 people in America, which makes for a rather large number of individuals suffering from restless nights, poor sleep, and the incapacitating sensations to move the legs. Restless leg syndrome can be manageable and cannabis is here to make it even easier to do so.

What is Restless Legs Syndrome?

Restless Legs Syndrome (RLS), also known as Willis-Ekbom disease, is characterized by an uncontrollable need to move the legs due to an uncomfortable sensation. RLS usually presents that sensation while sitting or lying down and can be temporarily eased by moving around. The condition can begin at any age but tends to get worse over time. RLS negatively can severely impact the quality of life as daily activities and sleep get interrupted. RLS can be primary, meaning it has been presented by itself, or it can be secondary, which means that it was caused by another medical condition.

The cause of RLS is unknown but is believed to be related to an imbalance of the brain chemical known as dopamine, which is responsible for sending messages to control muscle movement. RLS also does not necessarily lead to any other medical complications but individuals suffering from incapacitating symptoms may develop depression and daytime drowsiness as their quality of life is severely impacted.

Symptoms of RLS can be triggered by stress, inactivity, restrictive/tight clothing, refined sugar, temperature, exercising too much, smoking, caffeine in the evening, alcohol, lack of sleep and it may even be triggered by pharmaceutical medication.

The main symptom of RLS is the urge to move the legs but the condition is accompanied by other symptoms such as:

The sensations which make up part of the symptoms have been described as feelings such as creeping, pulling, throbbing, aching, and itching, which occurs within the limb rather than on the skin. In general, the sensations are difficult to explain but the symptoms of RLS are known to fluctuate in severity.

There are various treatment options available for patients with Restless Legs Syndrome, however, there is no cure. The first step taken against RLS is avoiding substances and food which may cause the severity of the symptoms to get worse. Individuals should avoid alcohol, caffeine, and nicotine. Physicians may even recommend dietary supplements to correct vitamin and/or mineral deficiencies. Additionally, medications are prescribed to patients with RLS and are consumed in accordance with the severity of the condition. Pharmaceutical medications commonly prescribed include (1) dopamine agonists such as Mirapex or Neupro, (2) dopaminergic agents such as Sinemet, (3) benzodiazepines such as Xanax or Restoril, (4) opiates such as Vicodin or Norco, (5) anticonvulsants such as Neurontin or Horizant as well as (6) alpha2 agonists such as Catapres.

The unfortunate reality of taking pharmaceutical medications for alleviating symptoms is that they may cause adverse side effects and some even come with a risk of addiction. Pharmaceuticals can also become costly, especially if consumed every day. Considering all of that, it makes sense that more and more people consider cannabis as an alternative treatment for symptoms.

Cannabis can offer RLS patients a natural, affordable, and easily accessible (where legal) medication that is touted by many to be more effective and safer than many other pharmaceutical medications. As such, cannabis can even reduce the need for additional pharmaceuticals, which further minimizes exposure to risks of addiction and side-effects.

A 2017 study published in Sleep Medicine (Vol. 36), found that medical cannabis was effective in alleviating RLS symptoms in the patients who participated. The patients were administered cannabis through inhalation methods and reported that there was a significant improvement in symptoms, with one in six reporting total relief. The patients specifically noted the improvements in their sleep quality.

While most of the support for cannabis as an effective treatment of RLS is anecdotal, there is substantial research and studies available on the effectiveness of cannabis symptoms shared by RLS and other conditions. Cannabis can assist patients with RLS by improving quality of sleep (which eliminates poor sleep as a trigger for more severe RLS symptoms), elevating mood, reducing pain, alleviating anxiety and stress (making another avoided trigger) and cannabis can assist with problems related to the poor sleep such as lowered sex drive, depression, and vulnerable immune system. Dr. Gary Wenk explains in an interview with Psychology Today that,

“The brains of patients with Restless Leg Syndrome may be in what is called a “hyper-dopaminergic state” – too much dopamine is being released inside the basal ganglia” and that “chronic cannabis use is associated with reduced dopamine synthesis capacity. Thus, the efficacy of cannabis in patients with Restless Leg Syndrome may be due to its ability to prevent the excessive release of dopamine and restore normal neural activity in the basal ganglia”.

Since Restless Legs Syndrome can reduce the quality of life and even possibly be tied to a shortened life expectancy, it is important to make known that cannabis is available as a viable and effective means of managing the symptoms of RLS. Cannabis can improve and even help minimize symptoms. If you have any experience with using cannabis for RLS, we’d love to know in the comment section below.

Is there any research or anecdotal experience that shows using cannabis strains can be helpful for Periodic Limb Movements in Sleep ( PLMS ), a condition closely related to and frequently present with Restless Legs Syndrome?
Thank you,
Moving Man

Hi Moving Man,
I have not come accross any studies specifically on cannabis for PLMS. However, if the symptoms are similar to those of RLS, you should still find relieve. At the very least, cannabis can improve your quality of sleep and reduce the pain. I will continue to keep an eye out for those studies relating to canna and PLMS, if I find something, I will share it.

Hi Chane, thank you for another informative read! I was wondering if, in any of your research, you came across specific strains that were particularly or supposedly helpful for treating RLS? If so, would you please share? All the best, -Dicky

Thank you so much for reaching out. I have not come accross specific strains for RLS in my research but I have come accross educated-suggestions. I would reccomened full-spectrum products with higher quantities of CBD cannabinoids or with a more balanced THC/CBD cannabinoid profile. In all my research the most common strains for medical effectiveness have included strains such as Harlequin, ACDC, Jack Herer, Granddaddy Purp (these are what I would reccomend). Consuming broad spectrum products, such as the cured bud, you will be benefiting from cannabinoids and terpenes. I am sorry that I couldn’t be more specific but our hands can only reach for what is known until more research becomes available. If I ever do come accross strains spectifcally for RLS, I’ll be sure to let you know Dicky. Kind regards, Chane Leigh