Home Lifestyle What Combo of Terpenes and Cannabinoids Create the Perfect High?

What Combo of Terpenes and Cannabinoids Create the Perfect High? 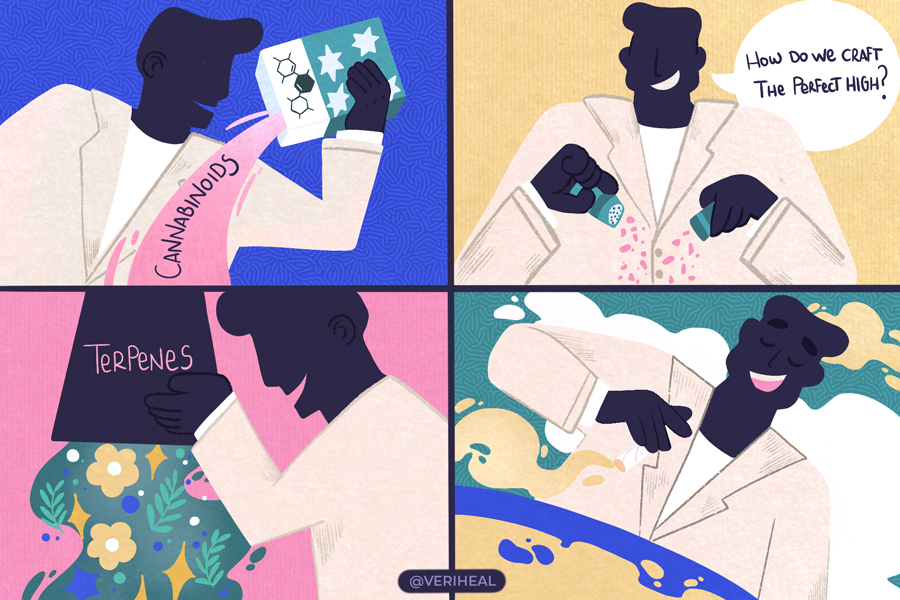 Scientists are changing the perfect high…what does this mean for us? Well, it means that scientists, mostly chemists, at big cannabis companies are trying to create a predictable and reliable product. It turns out that terpenes may be the key to generating predictable and reliable products. All strains of cannabis can contain the same cannabinoids, yet the effects differ. The effects would still differ if the different strains had the same quantity of cannabinoids.

INSA is a premium medical facility that deals with cannabis from the time it grows to the time you ingest it. The company has growing facilities, a lab, a kitchen, and a shop all in the same building. They can be found in Easthampton, and they were named after indica and sativa cannabis varieties. The chief executive of INSA has stated that they are trying to re-educate their consumers—but what does that mean?

Well, indica strains have been said to be sedating or relaxing, while sativa strains were said to be energic or euphoric. This was before we knew anything about terpenes. Scientists have come to show that while there are maturation time and physical differences between indica and sativa, there are no corresponding, consistent differences between the chemical profiles of the two. Companies such as INSA are claiming to have identified certain effects backed up but information on the terpene profile and cannabinoid breakdown.

Let’s look at an example. Ethan Russo is an American neurologist. He was passionate about finding a remedy to conditions and illness through herbal measures, such as cannabis. He then went into aromatherapy and found that when he inhaled tetrahydrocannabinol (THC) alone, he found it very hard to function. He stated that adding a terpene such as pinene would take that whole unpleasant experience and turn it into a clear-minded experience.

Adding a further terpene, such as limonene, will make the clear-minded experience more pleasant, vibrant, and alive. Pinene is the terpene that gives off a “pinewood” scent while limonene has a “citrus” scent. This means that dispensaries can offer a “vibrant, clear-headed effect” if their cannabis contains terpenes corresponding to those effects, limonene, and pinene. As long as the chemical profile of the terpenes and cannabinoid quantities are the same, it should, theoretically, be classified as a proven reliable product.

Since we have discovered and proven through research that the indica and sativa categorization for effects is no longer effective or accurate, we should re-educate ourselves on how to ensure consistent products and effects when consuming cannabis. Hopefully, more research becomes available that has been approved and accepted by the local medical facilities in order to take steps toward allowing cannabis to be available in more conventional manners as well as providing a possible manner for regulating the product.

Your article about terpenes was very interesting and informative. This is the kind of research that is helpful as one navigates the scientific benefits of CBD. Thanks!

Thank you for this great information. I’m slowly getting more educated with the different strains and healing effects of cannabis