Home Research All About Dr. Raphael Mechoulam: The Man Who Discovered THC

All About Dr. Raphael Mechoulam: The Man Who Discovered THC 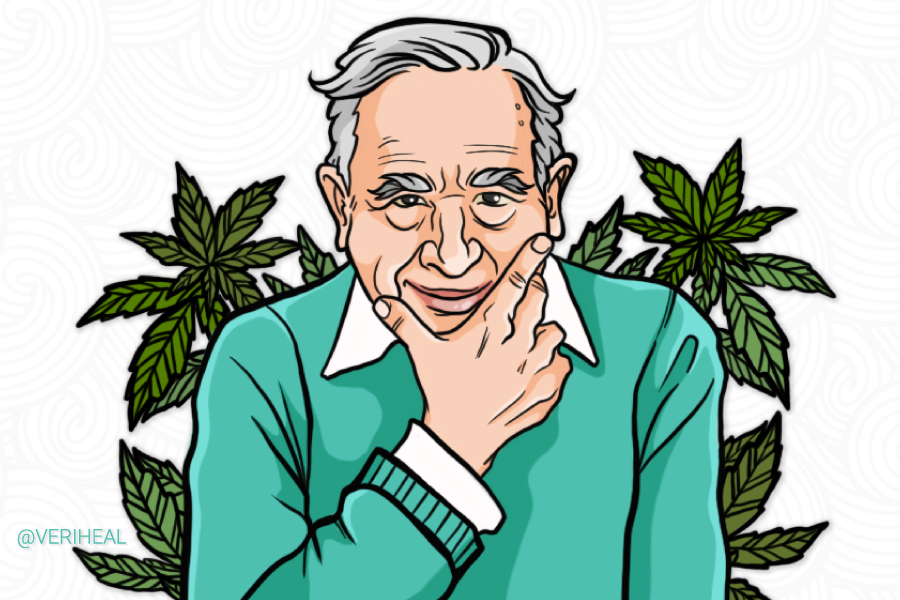 The discovery of tetrahydrocannabinol (THC) is a major milestone in the world of weed. This discovery, of around 50 years ago has revolutionized the way that we think of cannabis. Dr. Raphael Mechoulam succeeded in the very first isolation and elucidation of the active compounds in cannabis by isolating the ‘delta-9-tetrahydrocannabinol’ compound, commonly referred to as THC.

Dr. Raphael Mechoulam is an Israeli organic chemist and professor of medicinal chemistry. He was born on the 5th of November in 1930 and has received the Rothschild Price in 2012 the Heinrick Wieland Prize in 2004 as well as the Israel Prize in Exact Sciences in 2000.

Dr. Mechoulam was born Jewish in Bulgaria and later moved with his family to Israel where he studied chemistry and got his first research experience working for the Israeli Army on insecticides. He then went on to receive his Masters of Science in biochemistry from the Hebrew University of Jerusalem and then his Doctorate from the Weizmann Institute based on a thesis of the chemistry of steroids. He then went on to do postdoctoral studies at Rockefeller Institute in New York thereafter he became part of the scientific staff at the Weizmann Institute before moving on to the Hebrew University of Jerusalem as a professor. Raphael was then elected as a member of the Israel Academy of Sciences in 1994.

Dr. Mechoulam is best known how his isolation, elucidation, and synthesis of THC, for the isolation and identification of endogenous cannabinoid anandamide in the brain as well as for the 2-arachidonoylglycerol from the peripheral organs. Many people refer to Raphael as the father of cannabis for the major contributions he has made to the industry. Recently, Raphael and his research team received recognition for the total synthesis of another miraculous cannabinoid called Cannabigerol (CBG). Raphael stated that the beginning of his exposure to cannabis began in South America where, at the time, only a few musicians were consuming cannabis.

Raphael explained that he just opened one book from his vast collections of books and had to choose one that made sense for him to research. He chose cannabis because the compounds in the cannabis plants have active products which turned out to be interesting for him. In fact, he had no idea that receptors for the compounds (cannabinoids) could be found all over the human body. He explained that only much later did he found out about the cannabis plant phyto-endocannabinoids which react to the human endocannabinoid system, delivering effects all over the body.

Raphael’s biggest scientific interest is in the chemistry and pharmacology of cannabinoids. Dr. Mechoulam has also published over 350 scientific articles and assisted his students and fellow researchers, such as Shimon Ben-Shabat, in major cannabis breakthroughs too. Many people believed that it is plausible that Dr. Mechoulam will win a Nobel Prize for his work and contributions to the cannabis industry.

Raphael was 32 years old when he began research on cannabis, with his friend Dr. Yechiel Gaoni. He first applied for a research grant from the National Institutes of Health (NIH) in America but was rejected… at least until they successfully isolated THC. Soon after that, the NIH went to Israel in order to see their work. At the time, they had successfully isolated around 10 grams of THC from hashish, which was taken back to America but NIH. From there, the initial stages of testing on THC in America was done with Dr. Mechoulam and Dri Gaoni’s isolated stash.

Dr. Mechoulam and his teams were able to do such research, even though Israeli law prohibited cannabis just like American law did. However, he was not subjected to the law as it was assumed that he would never go out and start selling cannabis. In connection with that, there were extremely few people that were able to work on cannabis.

Cocaine, morphine, and cocoa were all discovered around 150 years ago and Dr. Mechoulam thought it seemed strange that THC was not yet known before he discovered it. He goes on to explain that it may have to do with the fact that cocaine, morphine, and cocoa were all discovered easily because they contained a nitrogen atom, which THC does not have that atom as well as presents with a mixture of compounds. He states that there were no techniques available back then but now we know of over 60 compounds that make up the cannabis plant.

Nobel Prize winner, Lord Alexander Todd, even tried to isolate the cannabis compounds but was never successful in isolating the compounds as pure substances. Raphael states that such brilliant researchers working with the plant may not have known that the plant was made up of so many, and more complex, compounds.

Israel and its’ researchers continue to be at the forefront of breakthrough and research in the cannabis industry.

My college roommate at the University of Illinois renounced his Evans Scholarship to move to California, get residency, apply to Cal and ultimately to graduate school at St. Louis University. Upon graduation he couldn’t wait to get to the University of Israel to study with Doctor Raphael ! Together the team discovered what they named “anandamide”, a Sanskrit word meaning bliss or joy ! Great article Chane….my roommate Bill Devane would have smiled reading it !

HI Drew, I just saw your comment and wow! Thank you so much for sharing that and for your kind words!