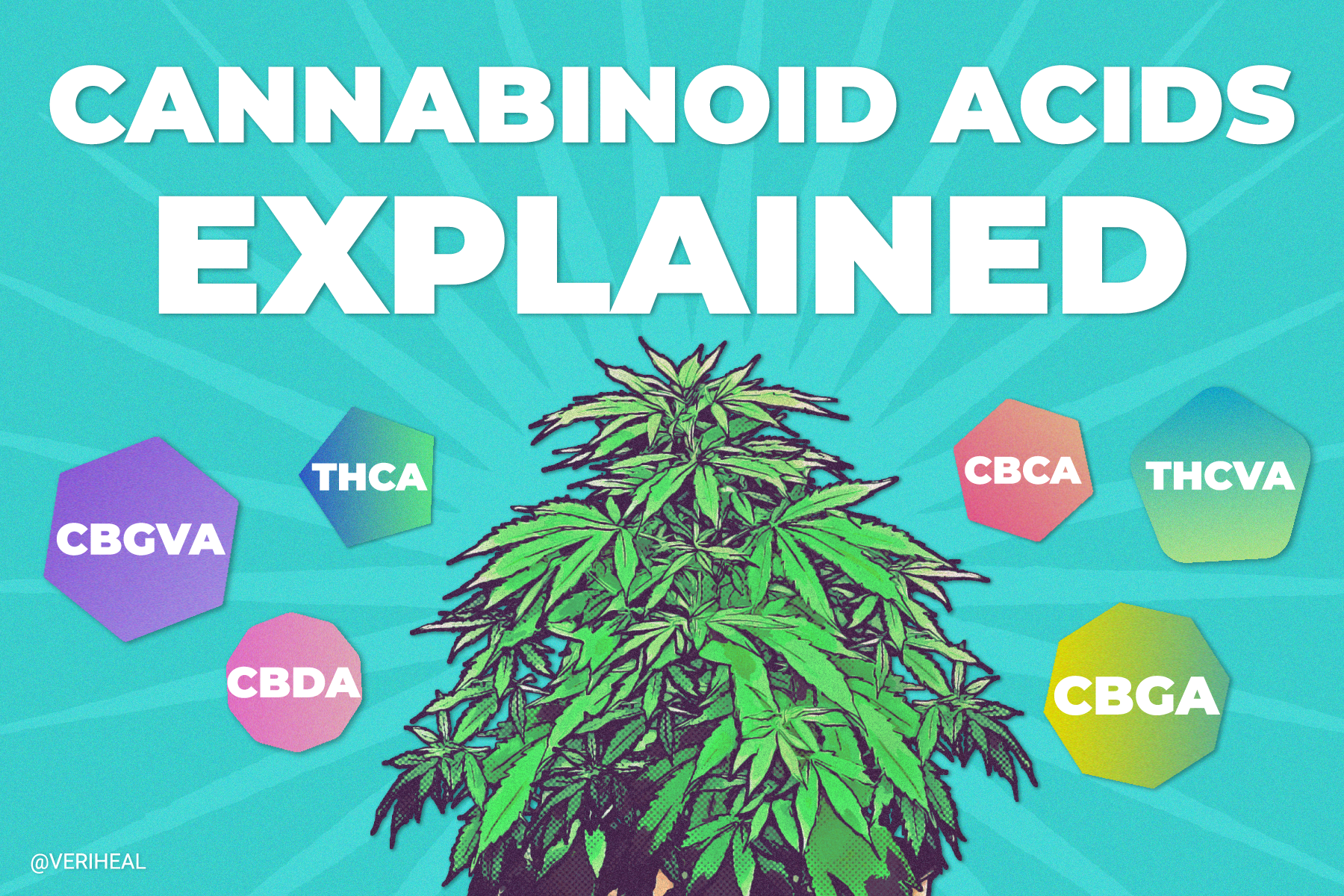 Cannabis is probably one of the most complex plants in the world, with over 400 chemical entities. Of these, more than 60 are cannabinoids like THC that interact with our bodies to produce effects and benefits. But what many cannabis consumers don’t know is that cannabis doesn’t naturally contain the activated cannabinoids we all know and love. Rather, cannabinoids begin their lives as molecules known as cannabinoid acids.

What Are Cannabinoid Acids?

According to the Journal of Natural Products, cannabinoid acids are acid precursors that are dominant in the plant. Essentially, cannabinoid acids are the original form of cannabinoids and have a slightly different chemical structure—that is, they have a carboxylic acid ring. This ring is removed through the process of decarboxylation, which involves exposing the cannabis to heat or light. The end result is an activated cannabinoid that affects the body much differently when consumed.

A study published in 2019 explains that all cannabinoid acids are characterized by the presence of an alkyl side chain, and most of them are formed with five carbon atoms. However, some are formed with three carbon atoms, making them “varinoids.” These ones, such as tetrahydrocannabivarinic acid (THCVA), are easy to spot on paper due to the presence of “varin” in their names. Finally, though rare, some contain only one carbon atom and are called orcinoids.

A team of researchers from the University of Campania in Italy explained that the benefits of cannabinoid acids are being largely overlooked despite a growing interest in them. According to the team’s 2020 study, cannabinoid acids do not induce any psychotropic effects. Considering how much safer this makes them for widespread consumption—particularly for individuals who cannot ingest the intoxicating THC—many in the industry are uncertain they’re not receiving the same attention as cannabinoids.

Types of Cannabinoid Acids and Their Potential Benefits

As pointed out above, research into the effects of cannabinoid acids is still in a very early stage. However, some preliminary studies have discovered a variety of potential benefits offered by some of these molecules, justifying further experimentation.

As you can see by the abbreviations of the cannabinoid acid names, they lose an “A” once the carboxylic acid ring is removed by means of decarboxylation (e.g., THCA becomes THC). This is indicative of the structural changes being made to the atoms when exposed to heat.

THCA, also known as 2-carboxy-THC, has the ability to reduce inflammation, inhibit tumor growth in prostate cancer, treat nausea, act as a neuroprotectant (against seizures), and manage chronic pain.

When THCA is subjected to the decarboxylation process, it becomes THC.

CBDA shares many of its benefits with its better-known compound CBD, such as being able to reduce inflammation, alleviate nausea and vomiting, and act as an anticonvulsant. It also has anti-carcinogenic properties for battling pain and cancer.

When CBDA is subjected to the decarboxylation process, it becomes CBD.

CBCA has been shown to have antidepressant, anti-cancer, anti-bacterial, anti-fungal, and anti-inflammatory properties while also being able to promote healthy cell growth and relieve pain. It may also help relieve pain, nausea and vomiting, and improve appetite and muscle spasticity.

When CBCA is subjected to the decarboxylation process, it becomes CBC.

CBGA, which is often referred to as the mother of all cannabinoids, was found to be even more effective at reducing seizures than CBD, making it a powerful anticonvulsant along with its benefits of being anti-inflammatory, anti-proliferative, antibacterial, and analgesic (pain-relieving). Its properties may be particularly beneficial in diabetes and cancer.

When CBGA is subjected to the decarboxylation process, it becomes CBG. CBGA is the parent molecule of many of our favorite major and minor cannabinoids.

CBGVA is suggested to be an anti-inflammatory agent that is particularly beneficial against glaucoma. It also has the potential benefits of being antibacterial and analgesic and might help to alleviate nausea and vomiting.

When CBGVA is subjected to the decarboxylation process, it becomes CBGV.

Much like many other CBD-based cannabinoid acids, CBDVA has been suggested to be effective in reducing the frequency and severity of seizures, alleviating nausea, being anti-inflammatory and analgesic, and managing mood disorders.

When CBDVA is subjected to the decarboxylation process, it becomes CBDV.

CBCVA is said to be highly effective as a painkiller in addition to having antifungal, anti-bacterial, anti-inflammatory, antipsychotic, and antidepressant properties. It is also suggested to be effective against acne and diarrhea as well as being effective as an immunomodulator and neuroprotectant.

When CBCVA is subjected to the decarboxylation process, it becomes CBCA.

THCVA is suggested to be effective as an appetite suppressant while defending against chemotherapy-induced nausea and vomiting, regulating blood sugar levels, reducing insulin resistance, and having anticonvulsant, antioxidant, and neuroprotective properties.

When THCVA is subjected to the decarboxylation process, it becomes THCV.