Home Research What Is THCA? How Does It Work? What Are the Benefits?

What Is THCA? How Does It Work? What Are the Benefits? 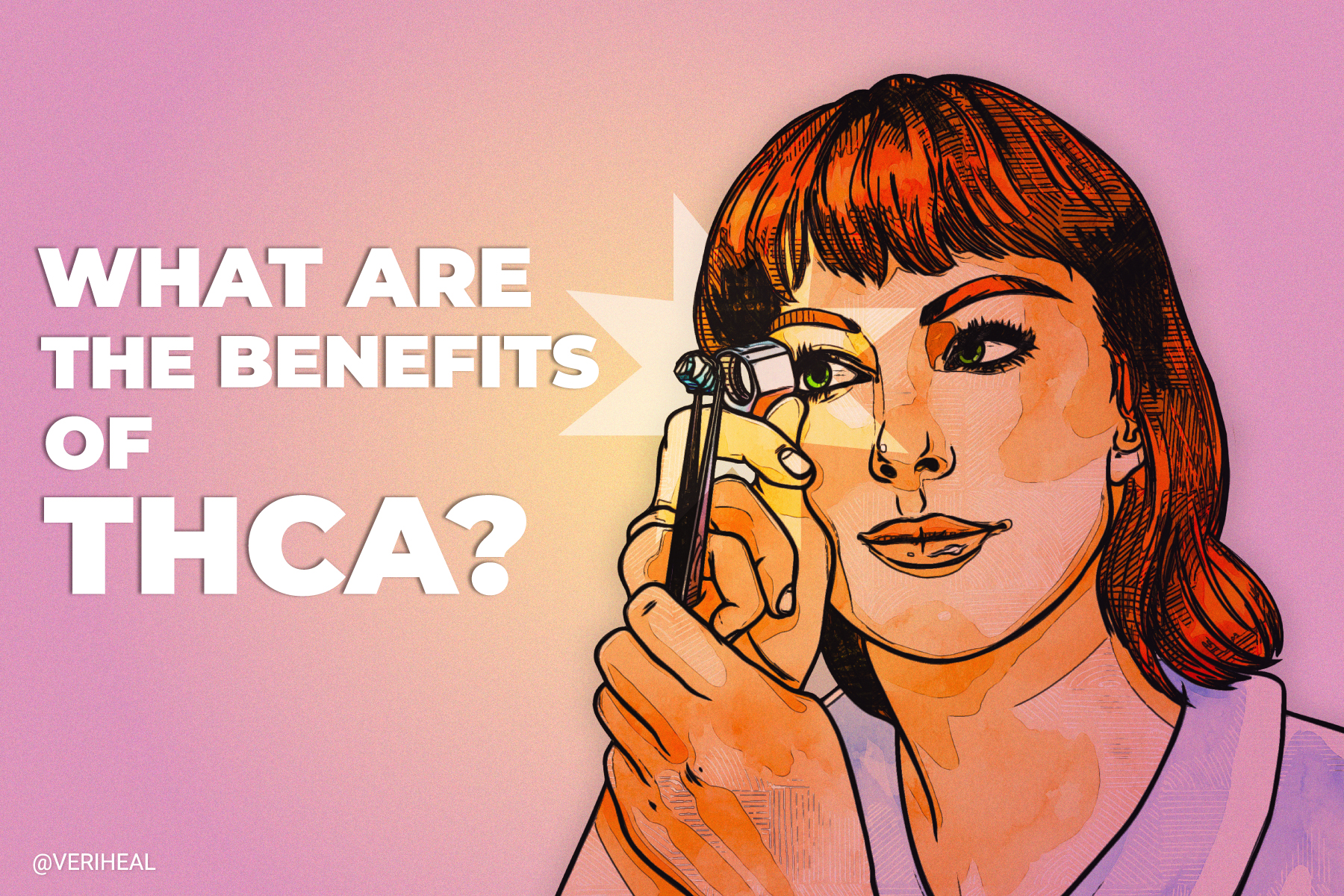 Many are familiar with the cannabinoids THC and CBD. THC or Δ9-tetrahydrocannabinol is the notorious cannabinoid that’s responsible for the euphoria you experience after consuming cannabis. Cannabidiol (CBD) is the other well-known cannabinoid that doesn’t get you high but still comes with a variety of medicinal benefits. Through cannabis research, scientists have discovered that there are over 150 cannabinoids and phytocannabinoids, one of which is known as THCA.

THCA, which is also known as Δ9-tetrahydrocannabinolic acid, is considered a cannabinoid acid. As the cannabis plant grows, it produces olivetolic acid and geranyl pyrophosphate. These acids break down in a condensation reaction and are responsible for forming cannabigerolic acid (CBGA) which is then converted into many cannabinoid acids including THCA, cannabidiolic acid (CBDA), and cannabichromenic acid (CBCA). Read on to find out why this is an important chemical process that helps your medicine help you.

In addition to typical cannabinoid acids, there are also acids that are formed but contain three carbon atoms, instead of the five typically found in cannabinoid acids. These acids are called varinoids. You can tell which acids are varinoids because the names include “varin” at the end of the word. Additionally, acids with the suffix “orcol” only contain one carbon molecule. The differences in the number of carbon atoms mean that these are all very different chemical compounds.

Take a look at eight known cannabinoid acids and varins in the image below to see what corresponding cannabinoids they are converted to:

Raw cannabis is naturally dense with cannabinoid acids THCA and CBDA. In fact, up to 90% of the potential THC stored in raw cannabis begins in the form of THCA. The other cannabinoid acids are present but just in substantially smaller amounts. While cannabinoid acids don’t produce any known intoxicating effects, they do have antimicrobial and insecticide properties. This helps protect the cannabis plant as it grows and produces cannabinoids in its trichomes.

So…if not converted to THC and is non-psychoactive, what benefits does THCA offer? While research on cannabinoid acids, including THCA, is still in its beginning stages, there is evidence that it is beneficial for alleviating certain symptoms. THCA, also known as 2-carboxy-THC, is known for the following:


New research published in Cannabis and Cannabinoid Research also suggests that THCA may increase the absorption of orally ingested cannabinoids when taken concurrently or together with either THC or CBD. When it comes to THCA’s role in the endocannabinoid system, it is still unclear whether it activates the CB1 receptor or if it crosses the blood-brain barrier although functionally it appears to do so. The exact benefits, drug interactions, and long-term effects of THCA are still to be fully determined but are likely contributing to the entourage effect in a beneficial manner.

Does THCA Have Side Effects?

Because research into the effects of THCA—particularly on humans—is very limited, we still can’t make any comprehensive claims about this cannabinoid acid. However, preliminary studies and anecdotal evidence from consumers point to THCA being safe for consumption with few to no adverse side effects. Any side effects experienced by consumers are also likely inconsequential compared to the growing list of THCA’s potential therapeutic benefits.

THCA is particularly safe for consumption by most individuals due to the fact that it produces no high. It should be noted that most of the reported side effects from THC consumption, such as dizziness and paranoia, come as a result of that cannabinoid’s intoxicating properties. Raw cannabis flower that will be used for its THCA content should be stored in a dark, cool place to prevent the THCA from converting to THC. Consumers should also be cautious not to intake excessive amounts of THCA, as with any substance.

Where to Get THCA and How to Use It

All cannabis flower and plant materials actually have THCA in them, making it very easy to find. Fresh cannabis and high-THC strains will have the most especially. If you purchase raw flower that has been tested in a lab, you’ll notice that the label will properly indicate the percentage of THC or THCA. As THCA is the unconverted form of THC, these percentages essentially mean the same thing. THCA can be found in products such as balms, oils, tinctures, and transdermal patches.

Juicing with raw cannabis leaves is also another popular method of consumption. If you would like to tap into the benefits of THCA without risking intoxicating effects, we recommend that you avoid applying any sort of heat that will convert it to THC. Alternatively, it can be taken in combination with THC or CBD that have already been decarbed in order to increase their absorption and bioavailability as stated above.

Despite all of this exciting research, there is still so much to learn about cannabis and all of its components that make it valuable. We are excited to see what research has in store for us and for the world to become aware of the benefits of all cannabinoids. Until then, be prudent by consulting a medical professional to see if cannabis is right for you!

Is there any case that the next generation of thcva may be another synergistic absorption tu bring it in a potent spec?

I really do appreciate the information from this site, thank you so much. I am seventy years young and have been smoking flower since 1969 and its nice to be informed about the marijuana and its properties.