Could Bees Naturally Produce Honey From the Cannabis Plant? 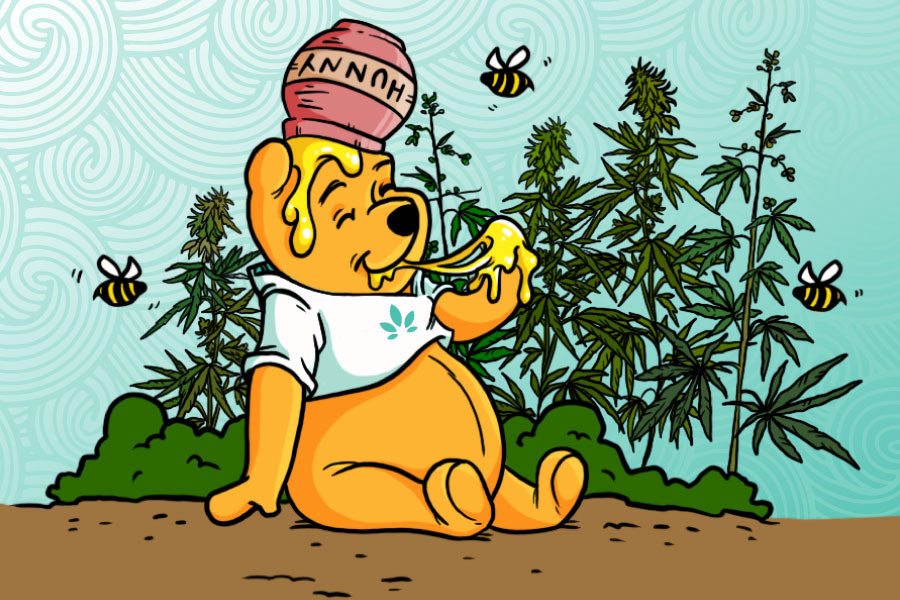 Recently there has been a lot of hype around using cannabis to help save the bees from extinction. As a result, people starting buzzing at the thought of cannabis honey being produced naturally by bees. There are a few people around the have either had or produced cannabis honey with their bees. It makes one wonder whether the bees can make this honey naturally or if there is some human intervention.

The amazing thing about bees and cannabis is that they are both naturally produced products, they both have amazing health benefits, and both happen with minimal human intervention. The combination of both highly in-demand commodities would be making history.

Bees cannot get high on cannabis despite feeding off its’ flower, which contains cannabinoids. Bees do not have an endocannabinoid system, which is what receives the cannabinoids and carries through its’ effects.

Bees can make cannabinoid honey through processing the trichomes into their honey. Some of the trichomes bees take with their pollen can also be turned into propolis. Propolis then acts like a poly-filler to help repair and clean their hives. Propolis is also antiseptic, antibiotic, anti-fungal and antibacterial.

Common criticism on this possibility is the fact that bees suck up nectar, not pollen. The Bumblebee Conversation Trust responded by saying that bees can collect cannabis pollen. There is already similar psychoactive honey named “Mad Honey” made from the nectar of the rhododendron flower that bees collect in the mountains of Nepal.

A Frenchman, known as Nicolas Trainerbees, become viral after posting a video of his trained bees feeding off of his cannabis flowers. He has trained his bees in a variety of ways, he has also trained them to collect the fruit instead of the usual flowers they would tend to.

How Would the Bees Make Cannabis Honey?

It’s pretty simple actually. They would harvest the resin from the cannabis plant, take it back to their hive and process it as they would the normal nectar they consume.

This resin would have to come from female cannabis plants for its psychoactive cannabinoids including Tetrahydrocannabinol (THC) and Cannabidiol (CBD). The honey that the bees make would still have all the same effects, but even more pure.

The article on how cannabis can save bees states that bees prefer the male plants for their flowers, and they prefer taller plants- without training the bees. Trained bees feeding off female plants could provide a win-win for the bees and those in the psychoactive cannabis industry. Yes, CBD is psychoactive too, which means that those industries will benefit too.

I must admit, the thought of cannabis honey that’s made naturally by bees is very exciting. However, all of this is just speculation at the moment.

The facts are that cannabis is not a nectar-producing plant and that bees would only feed off of the plant if it was their last resort, or if they receive a reward afterward such as sugar water. Despite this natural forcefield between the two, they are still somehow connected in a miraculous way.

Like usual, more research needs to be done into this despite that cannabis honey is already hitting the markets. It seems that trained bees are the only natural way to produce honey with cannabinoids. How they’re trained and how they’re able to take in the cannabis trichomes, as though it were nectar, still needs to be looked in to as well as the content, effects, and quantity of cannabinoids in the honey.

In the meantime, if you want to make your own cannabis-infused honey, check out this recipe. Enjoy!

i say bunk…i would love a conversation on this ..i offer 50 yrs experience

How many cannabis plants would I have to grow for bees to receive enough nectar?
Someone told me I’d need a Huge field of plants.
Please let me know. I appreciate your response in advance.