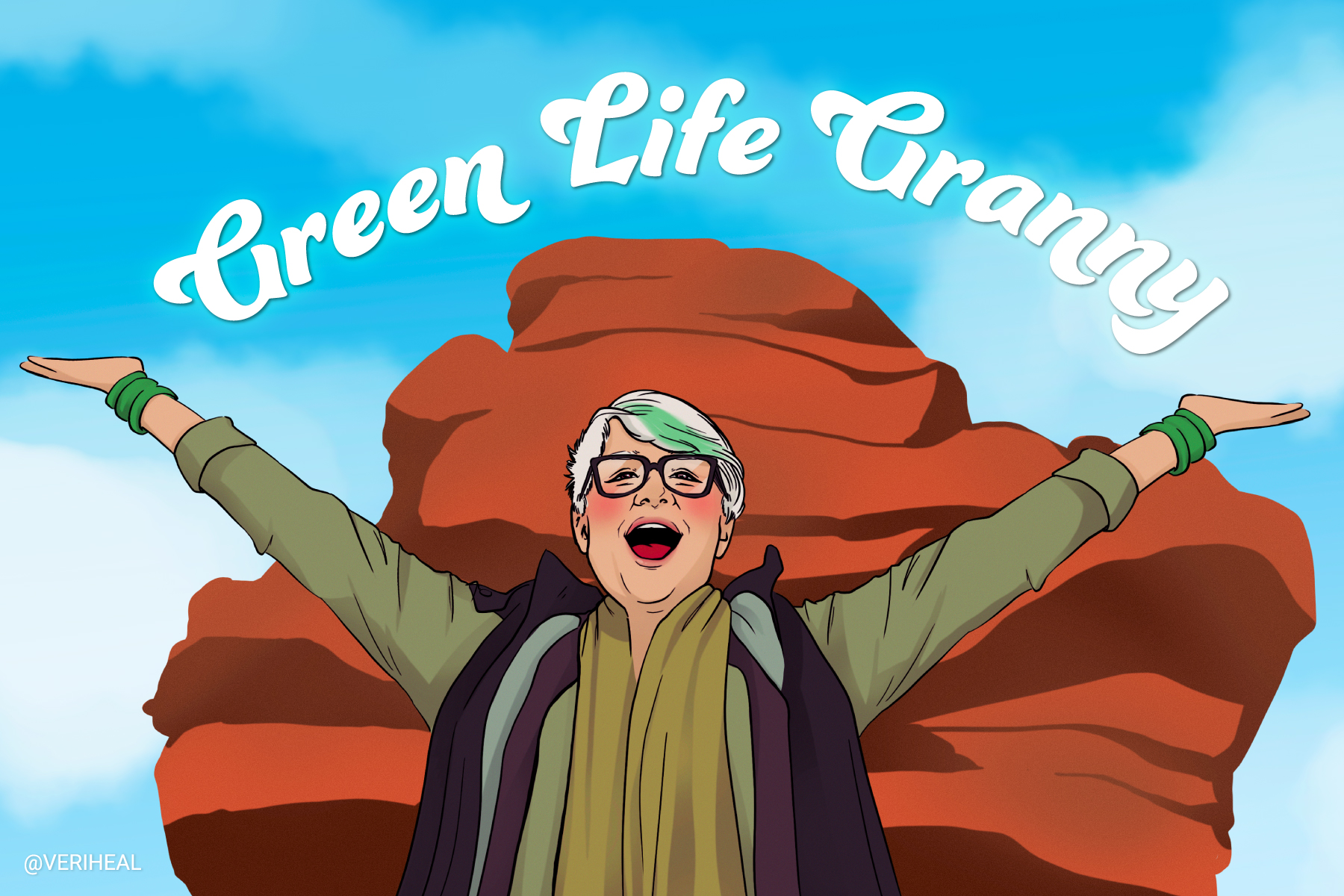 Lisa High is a grandmother like many others. She is also a grandmother, UNLIKE many others. Lisa is a cannabis patient and advocate. At one time in her life, she was close to approaching her end at the hands of modern medicine. Pharmaceutical drugs were wreaking havoc on her body, and Lisa found herself confined to a wheelchair, wearing a helmet, and eating fentanyl suckers on a daily basis. Luckily for Lisa, this path changed thanks to cannabis. Today Lisa goes by the name Green Life Granny. She advocates how cannabis helped her and loves to share her story with others.

Let’s get to know Lisa a little better. Lisa was born in a small town called Claremore, Oklahoma. Growing up, Lisa was a very active girl and during the time considered a tomboy because of her love of sports. Lisa loved to run. She enjoyed basketball in school and was very athletic. So just what happened that turned someone that was very athletic into someone confined to a wheelchair, wearing a helmet, and eating fentanyl suckers every day? The short answer is pharmaceuticals. The long answer is much more complicated.

The Start of it All

Lisa has two children. During the birth of her children, she suffered a medical condition called a placenta accreta which is characterized by the placenta growing into the uterine wall. As you can imagine, this is an extremely painful condition. During the birth of her children, Lisa nearly lost her life. At no time in her life had Lisa ever been a supporter of cannabis. In fact, she never understood why anybody would want to do anything that would slow them down. She was an athlete, and that didn’t make sense to her. If she wanted to tire herself out, she would run.

Lisa survived the birth of her children but was left with an incurable condition that she would carry with her the rest of her life. Through pharmaceuticals, Lisa found herself putting on excessive amounts of weight. She had had blackout spells from time to time since she was younger, but after the birth of her children, they became much worse. She would fall, hitting her head, and would end up laying in places for hours on in sometimes or until someone found her. These episodes continued to get worse.

Doctors ended up prescribing hundreds of hydrocodone a month on top of dozens of fentanyl suckers for Lisa. She ended up being confined to a wheelchair and wearing a helmet. She put on a lot of weight. Things were not looking good for Lisa. Her family truly believed they were doing the right thing by giving her the medication the doctors had prescribed.

The Green Life Granny Gets A Second Chance

Well, almost everyone in the family. One family member did not agree with this approach and believed that cannabis could help save Lisa and turn her life around. This family member ended up taking Lisa to Colorado, where she learned about cannabis and ultimately became the Green Life Granny.

As a result of the trauma brought forth by, early childhood trauma, medical illnesses, and a combination of prescription drugs mixed with bickering family members, Lisa can tell you she was pretty much just waiting to die. Cannabis was a game-changer for Lisa. It wasn’t so much smoking cannabis though that ultimately helped her heal.

Lisa found out about RSO (Rick Simpson Oil) and FECO(full extraction cannabis oil), and that really made the difference. She ended up staying in Colorado for weeks at a time. Cannabis oil was helping her and her dependency on pharmaceuticals. She slowly was able to lose weight, and finally was able to get out of the wheelchair and take the helmet off. Though she may have taken the helmet off, the effects of wearing the helmet still lingered with her. Lisa found herself to be an emotional wreck. Doctors in addition to her previous diagnoses of placenta accreta and skin cancer also diagnosed her with depression, anxiety, and PTSD. Today Lisa goes through life, telling her story to others and showing them pictures of then and now. She makes it a point to let the world know that cannabis helps her.

On top of all of this, Lisa had to deal with the gut-wrenching reality that she couldn’t bring the medicine that helped her home. That’s because she lives in Kansas. Lisa found herself becoming a medical cannabis refugee living in Colorado for weeks at a time. She would return home to handle things around the house, but it wasn’t long before her health started deteriorating to the point she had to go back to Colorado. Prescription drugs were not helping Lisa; cannabis was.

After years of traveling back and forth to Colorado and living in two states in order to regain a chance at life, Lisa found herself playing the role of cannabis advocate. She would talk to people along her travels and begin learning what people did and didn’t like about cannabis. She found that, for the most part, people had misinformation about what it would do. They thought it would make you lazy and want to lay around on the couch all day. They could never have imagined it would have helped someone lose excessive weight or get out of a wheelchair and helmet. Lisa, however, is walking, talking, living proof.