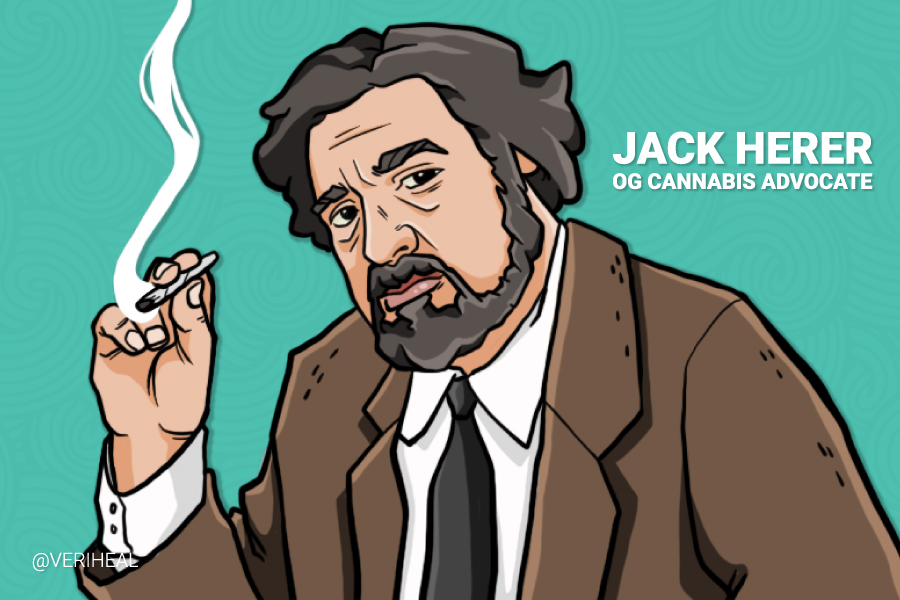 You may already be familiar with Jack Herer as a sativa dominant strain of cannabis. Sativa strains are the more invigorating and uplifting strains of cannabis—the “uppers” of the cannabis world—contrasted with indica strains, which have more of a sedative effect. The Jack Herer strain is known to promote focus and concentration by creating a sort of tunnel vision effect, helping the user to ignore distractions.

But it’s an odd name for a cannabis strain. Where does it come from? What does it mean?

The answer is that Jack Herer cannabis takes its moniker from a man of the same name. Jack Herer the man was an instrumental figure in the cannabis movement.

In the early 70s, Jack Herer started the Ah Ha Pipe Company in Van Nuys, California. The company was a purveyor of glass pipes, an item which was highly restricted at the time. Herer was one of the only suppliers willing to admit to what he was selling in his shop, which turned a steady profit because of the demand for pipes, the ease of producing them, and the inexpensive nature of the materials.

Because of the influx of harder drugs, like cocaine, the government was quick to crack down on the sale of any paraphernalia. But Herer was determined to maintain his business—and for more reasons than just a simple desire to make a buck.

In 1985, Herer published The Emperor Wears No Clothes, a social and historical work touting the merits of cannabis. In the text, Herer posits that if humans were to lose or sacrifice their access to fossil fuels, cannabis would be the only substance capable of replacing said fuels and keeping society running. Herer’s book gained notoriety by offering a “reward” of sorts—one hundred thousand dollars to anyone who could refute the claims made within.

This money was never claimed, although there were experts at the time who claimed that while the book was interesting, it was not one hundred percent factual and ought to be taken with a grain of salt.

The book claims that the government banned hemp as an over-reactive approach to confront the spread of marijuana. But, he argued, hemp had proven to be an incredibly useful plant throughout history. People have used hemp to make rope, clothing, food, and medicine, and banning it was never a good idea.

In addition, Herer said, people ought to have the right to get high if that was what they wanted to do. He even advocated for doing it, claiming that cannabis could protect against the development of cancer.

Nevertheless, Herer’s stance was a very bold one for anyone to take so early on in the modern cannabis age. Herer went on to speak at rallies and to advocate for the decriminalization of cannabis on the federal level. Today Herer is remembered as the father of the modern cannabis movement.

Jack Herer died in 2009 at the age of 70, but not before running for President of the United States twice as the Grassroots Party candidate. After his death, the Jack Herer strain of cannabis was given his name as an honorarium. Herer has also been inducted into the Counterculture Hall of Fame as a result of his book and its impact on readers and on the cannabis movement as a whole. The Jack Herer strain, meanwhile, has gone on to win several awards of its own, including the 7th High Times Cannabis Cup.

Every cannabis advocate should make it their business to know about this pioneer of the cannabis movement. Without his efforts. we would not be where we are today.

I need Medical pot for my seazzers