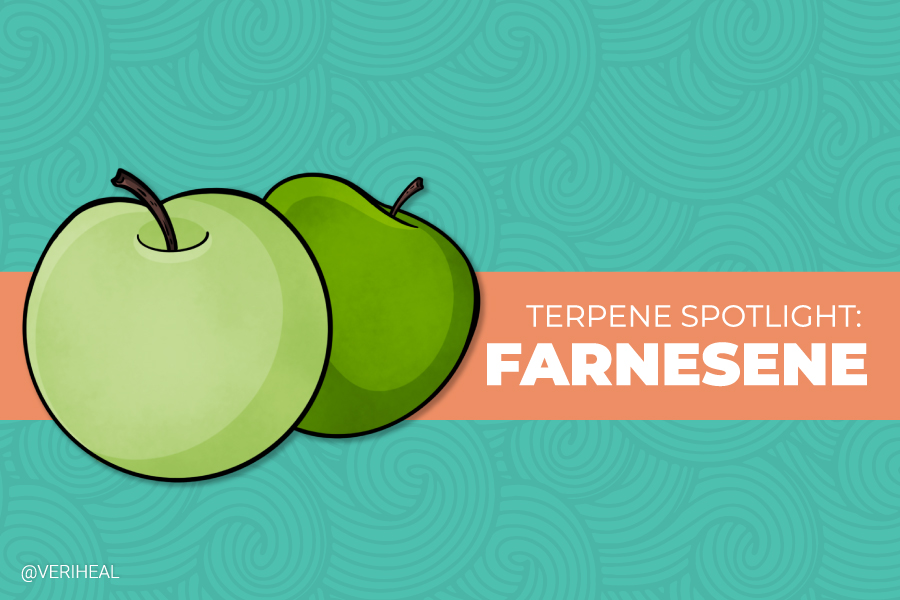 Cannabinoid science is advancing. Our understanding of cannabis is also advancing at the same time. It wasn’t not long ago when the mention of terpenes would draw a blank stare from just about anyone, including cannabis consumers. Chances are, if you throw the word terpene out there today, the majority of the crowd will know what you’re talking about. Many people that are considered cannabis connoisseurs have found that finding the right terpene profile to accompany the cannabinoid profile is particularly important in achieving the optimal effects of cannabis consumption. Terpenes are an amazing world of science. They influence flavor and smell. All kinds of things have terpenes. Some of these terpenes are more popular than others. A terpene that is relatively new to the terpene scene is alpha-farnesene. Before we get into talking about this green terpene, let’s dive into what terpenes are a little bit more. Let’s explore just what a terpene is and what it is they do.

Terpenes are found in pretty much every plant that has a smell and mostly serve as a pest and insect deterrent. Many of the terpenes found in cannabis are also found in and on other plants like black peppercorns, mangos, mint, lavender, and more. Terpenes not only help determine how cannabis smells, but they also play a role in how cannabis works.

Cannabinoids and terpenes are two peas in a pod. They work together to help influence a synergistic effect. Cannabinoids such as THC, CBD, CBG, CBN, CBC, and dozens of others work in harmony with dozens of different terpenes like a-pinene, b-caryophyllene, myrcene, and others. As cannabis legalization takes place across the country, research and development in the field of cannabinoid and terpene therapies are beginning to advance.

One terpene that you might not have heard a lot about that many people seem to enjoy is ‘Alpha-Farnesene’. This delightful terpene is part of what gives green apple skin its aroma. Farnesene is also found in turmeric and offers benefits such as tumor-inhibiting traits and anti-inflammatory properties. This sesquiterpene is found primarily within Indica dominant strains indigenous to the Himalayan valleys. This terpene is also known to help suppress spasms and provide consumers and patients with a calming euphoric effect.

According to trychemistry.com, Alpha-Farnesene is “The main terpene in green apple skin, farnesene is also found in relaxing essential oils like cedarwood, sandalwood, myrrh, and patchouli. This sesquiterpene is soothing for the mood with its calming and sedative effects. Besides inducing a relaxed state of mind, farnesene is also a muscle relaxant and antispasmodic.”

This set of sesquiterpenes is also found in hops, pears, and Ylang Ylang. It offers a woody, earthy, and citrusy aroma and flavor profiles similar to that of green apples. Farnesene also acts as a natural insecticide. This terpene can be found in strains such as Sour Tangie, Purple Punch, White Rhino, Tangerine Kush, Eagle Scout, Sour Jack, AppleJack, and many others.

According to a research paper published on the NCBI titled: “Taming THC: Potential Cannabis Synergy and Phytocannabinoid-Terpenoid Entourage Effects,” terpenes play an especially important role in the effectiveness of cannabinoids, especially in applications to the skin.

“Considered ensemble, the preceding body of information supports the concept that selective breeding of cannabis chemotypes rich in ameliorative phytocannabinoid and terpenoid content offer complementary pharmacological activities that may strengthen and broaden clinical applications and improve the therapeutic index of cannabis extracts containing THC, or other base phytocannabinoids. Psychopharmacological and dermatological indications show the greatest promise.”- NCBI.

Consumers are becoming more aware of cannabis these days. People are learning that it isn’t just about the highest THC level you can get. The entourage effect or a balance of cannabinoids and terpenes working together is where it’s at for many people. When it comes to terpenes found in cannabis, it’s said that the plant contains over 100 of them. Some of the most popular or most known terpenes in cannabis are Linalool, Limonene, Eucalyptol, Humulene, Myrcene, Alpha-pinene, Beta-pinene, and Caryophyllene.

The ‘entourage effect‘ is the theory that cannabinoids work with the various other compounds found in cannabis strains such as terpenes, amino acids, omegas, and other phytonutrients to the most benefits to consumers and patients. This theory is backed by research as well as countless anecdotal claims. This leads many to believe that terpenes such as linalool and myrcene, along with cannabinoids such as THC, CBD, and CBG, work better together! As science and research progress around the subject of cannabinoids and terpenes, we are sure that this will paint a better picture of how these two compounds work together in synchronicity.