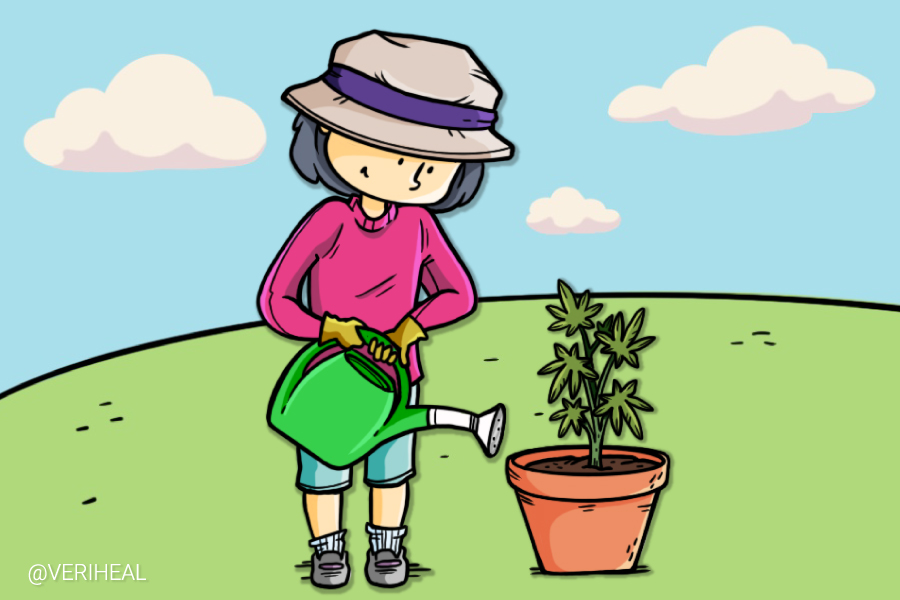 Many people aren’t aware they are making mistakes until they become aware… or told.  Hopefully, by learning about which common mistakes to avoid, your growing experience would be more pleasant than perplexing. Check out these seven common mistakes that many make when they begin the journey to cultivating cannabis.

Giving Your Growing Plants Too Much or Not Enough Nutrients

Giving your plants too many nutrients, sometimes referred to as overfeeding, can be a very easy mistake to be made, especially since it may not be your fault. It has been found that most nutrient companies are recommending feeding schedules that are way too high. Complying with the feeding schedules can overfeed your plant cause more harm than good. More food does not mean more goods. Plants being overfed can die but will most likely just get an affliction called nutrient burn (often referred to as ‘nute burn’). These burns will remain on the plant, even if the situation has resolved. This is because overfeeding leads to death to afflicted places in the form of the burns. It has been recommended that you use ¼ of the recommended dosages to avoid overfeeding the plants.

Over or Under Watering Your Plants

Over- and under-watering are both common mistakes, although overwatering the plant happens more commonly. Both can be detrimental to your plant. Despite being common mistakes, both over-watering and under-watering are easy to fix and get the plant back to its’ former glory. An overwatered cannabis plant will have leaves that are drooping but are firm to touch whereas an under-watered cannabis plant will have leaves that are limp and brittle. Both of these common mistakes can lead to some serious damages to your buds if you do not start correcting the situation promptly. Stick your index finger into the ground and only water the plants when the top inch (±2cms) is dry.

Temperature and humidity are crucial to the growth and development of quality cannabis. The most common mistake people make is not being fully aware of the climate the plants are growing in. A temperature that is too cold can stunt plant growth and can even kill the plants in more extreme cases. If the temperature is too hot, it will cause the plant to stress which can lead to curling leaves, very bad buds and it can also kill the plants in more extreme cases. The ideal situation is where the plant is getting around 75˚F (23˚C) daily and preferably nightly too. Too much humidity surrounding the plan can lead to the growth and spread of mold, which will eat away at your plants.

Growing seeds found in bags/packets of purchased products may seem like a good idea. However, this is one of the biggest common mistakes. Seeds from purchased products are risky. Many of the seeds will end up being duds with possibilities of males, runts, or hermaphrodites too. If you do end up planting a couple, you may be lucky and end up with a female…but you will likely have a male among them. These bad bag seeds can contribute to the spread of disease to your entire garden. These diseases are spread by your hands and include spider mites, white powdery mold, and tobacco mosaic virus. It is recommended that you avoid using unknown seeds and rather turn to a trusted seed source with information on the seed, or even better, has a moneyback guarantee.

Common mistakes individuals can make while growing indoors is not having enough lighting. Common mistakes individuals can make when growing outdoors is positioning the plant with insufficient sunlight coverage. In order for the plants to grow big and strong, they need lights…and lots of it. The amount of light the plant gets will act as an indicator to the proportions of your plant. Growing indoor with lots of light will deliver you with potent and dense buds while growing outdoors won’t be as potent but is authentic and robust.

Harvesting Your Grow at the Wrong Time

With regards to harvesting, common mistakes include doing so too early or too late. Harvesting too late or too early results in reduced effects from the compounds which is what we consume for medicinal and recreational use. Harvesting needs to be done at the right time to avoid missing out on the effects, losing potency as well as to avoid extreme cases such as rotting. Individuals make the mistake of harvesting too early or too late for a variety of reasons but are often contributed to the perplexity surrounding it. The best time to harvest is when the trichomes are at their best for optimal potency. Check out why trichomes are the key to cannabis potency.

This common mistake has little to do with the growing the plant itself but rather having it in the safety and security surrounding the growing. Growing cannabis is still illegal in many places and being too open about growing can lead to fines and even jail time. It may sound silly, but it happens more than you think. The individual posts a photo, the neighbor or passersby sees it and all of a sudden, the police are knocking at their door. There are even instances where individuals post photos of their cannabis where personal information can be seen such as that on mail. If your cannabis is in a place that is relatively easy to access, someone might trespass to take fruit from your effort. Rather be safe than sorry.

What weed will get you the highest and what products have the highest price? This is a very common question with a…

Mental Health Awareness Month has been celebrated in the United States in May since 1949. This is a time to reflect, share…