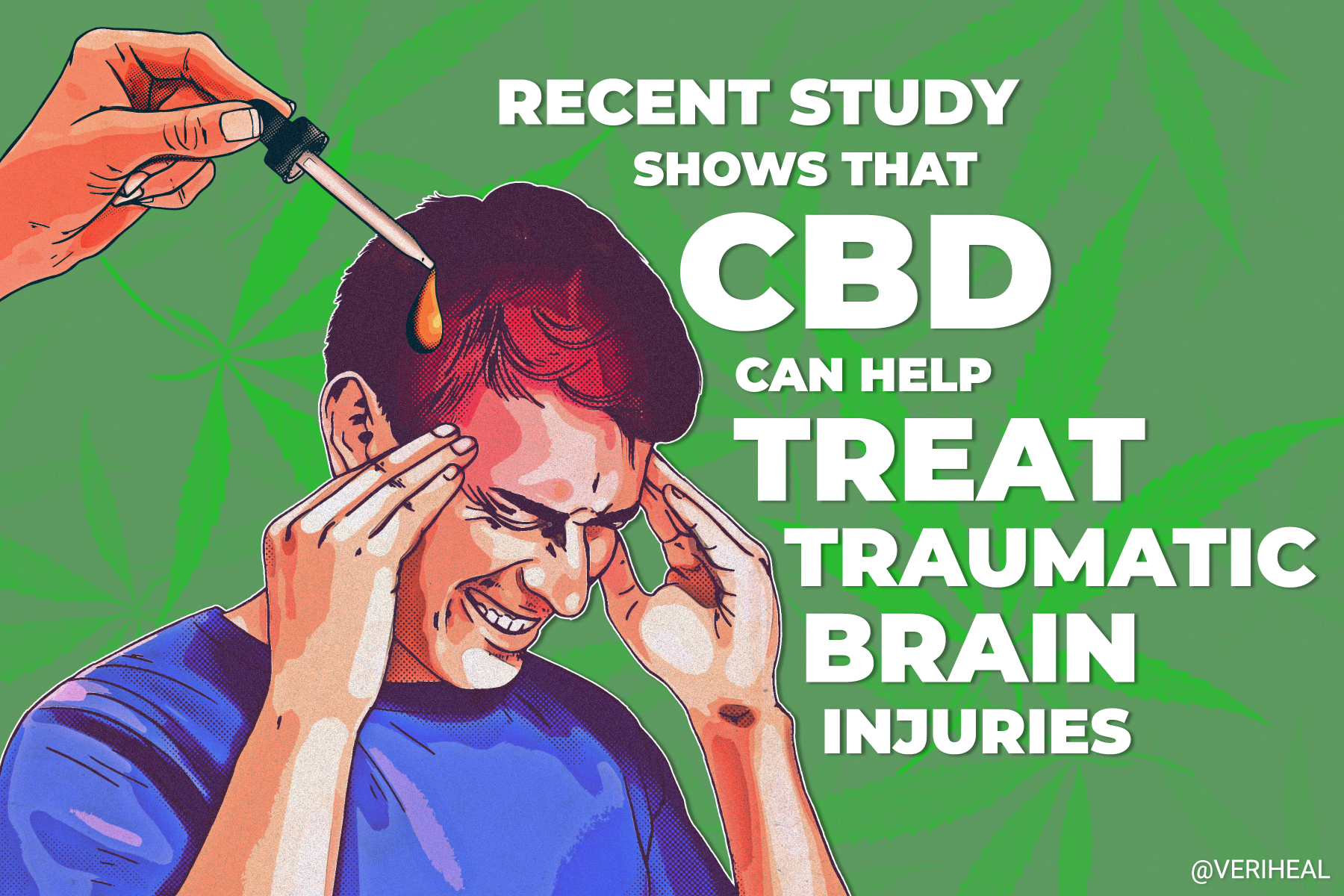 Traumatic brain injury (TBI) often results in serious short-term or long-term complications. According to the Mayo Clinic, these complications can be physical or involve altered consciousness, intellectual problems, communication problems, behavioral changes, emotional changes, or sensory problems. Fortunately, a new study found that cannabidiol (CBD) can be useful in the treatment of traumatic brain injury.

TBIs are common among those involved in vehicle-related collisions, sports injuries, violence/combat, or any other kind of circumstance that can cause significant head trauma. Regardless of whether the injury is ranked as mild or severe, the associated effects are debilitating and detrimental. Adding to the seriousness of a TBI is the fact that there are currently no universally effective treatments—which is what makes the findings of this new study especially significant.

A Beneficial Dive Into CBD and TBIs

According to the authors of the study, published in December 2021 in the journal Experimental Neurology, TBI has high incidence rates with no way “to safely treat patients.” The researchers go on to state that TBI can cause destruction to primary neural tissue which results in “impaired perfusion, excessive release of glutamate, inflammation, excitotoxicity, and progressive secondary neuronal cell death.” Based on the study’s results, administering CBD directly to the site of a brain contusion will improve neurological outcomes following TBI.

The team turned CBD into a gelfoam matrix (CBDi), which was administered to the injuries of a group of participants in combination with a CBD injection (CBD.IP). When both the CBDi and CBD.IP were administered post-injury, the test subjects displayed significantly reduced “defecation scores, lesion volume, the loss of neurons in the ipsilateral hippocampus, the number of injured neurons of the contralateral hippocampus and reversed TBI-induced glial fibrillary acidic protein upregulation which was superior to either CBD.IP or CBDi treatment alone.”

Test subjects performed a vestibular motor test on a beam balance, which displayed that their vestibular motor performance (relating to balance, stabilization, and posture) was restored by 12 days after the injury and was sustained through 28 days. Additionally, when the CBDi and CBD.IP were administered to rats, they displayed greater mobility and exploration of novel objects as well as reduced anxiety and restored cognitive function (improved learning and memory performance).

The delivery of the CBD treatment also resulted in a reduction of TBI-induced lesions, in addition to the reduced impacts on the hippocampus (the complex brain structure in the temporal lobe which plays an important role in learning and memory). The results of this study suggest that dual therapy “by targeting the site of injury internally with a CBD-infused medical carrier followed by systemic supplementation may offer a more effective countermeasure than systemic or implant treatment alone for the deleterious effects of penetrating head wounds.”

The Concussion Alliance stated that “current research is pointing towards CBD serving as a neuroprotectant, possibly helping the brain heal from concussions” and that “finding also indicate that CBD and/or medical cannabis can be effective for pain management, anxiety, and insomnia, all of which are common symptoms of concussions and post-concussion syndrome.” This is critical considering TBI can result in concussions. 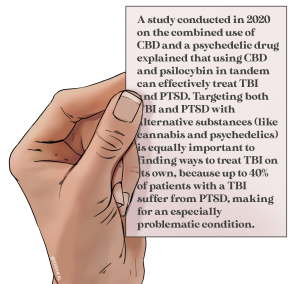 A study conducted in 2020 on the combined use of CBD and a psychedelic drug explained that using CBD and psilocybin in tandem can effectively treat TBI and PTSD. Targeting both TBI and PTSD with alternative substances (like cannabis and psychedelics) is equally important to finding ways to treat TBI on its own, because up to 40% of patients with a TBI suffer from PTSD, making for an especially problematic condition.

Another study was conducted in Canada on CBD for post-concussion brain disorder in former NHL players since “we see a lot of athletes who have chronic pain and have other problems related to repetitive brain trauma.” While the results of the study have not been published yet, Dr. Charles Tator told CTV’s Your Morning Monday, “We are reasonably optimistic that cannabis and especially the CBD part of cannabis can relieve a lot of that suffering.”

Meanwhile, an Australian study that began in the middle of 2020 is assessing cannabis as a neuroprotective agent due to “its ability to protect the brain against the main injury mechanisms which cause cell death and other negative consequences in the days and weeks following head trauma.” Just like the Canadian study, the results of this one have not been released, yet role-players are hopeful.

Another published study found that cannabis does not impact concussion recovery time but was associated with “lower symptom burden in the third and fourth weeks post-brain injury.” This reduction in concussion symptom severity can lead to improved quality of life, particularly concerning pain, mood, and sleep.

Lastly, a literature review published in July 2020 explained, “The use of cannabinoids in TBI increases neurobehavioral function.” The authors of the literature review concluded that targeting the CB2 receptor is a promising therapeutic approach in the treatment of TBI due to the fact that the receptor is “localized primarily in the microglia and less in neurons.”

Considering the serious adverse effects that can arise from a TBI, the fact that cannabis shows promise as a treatment is giving hope to plenty. If you wish to include cannabis in your TBI treatment plan, consult your physician to ensure that the cannabinoid therapy is done safely and effectively.