How to Officially Tell the Gender of a Cannabis Plant

As legalization and normalization of cannabis continue to spread, many cannabis consumers are making attempts to grow their own. Laws vary by state but increasingly people are choosing to sprout their own green, often by purchasing clones. Clones that are sold are supposed to be female as that is the gender that produces the flower. However if one is growing from seed even the cultivars with the highest feminization rate, will have some males in the bunch.

The Sex of Your Cannabis Plant Plays an Important Role

With cannabis, females are usually isolated away from males—introducing males into a garden will result in pollination, causing females to create seeds. Female plants can be grown with or without help from the male plants. These are the plants that we most-often want to grow since they produce the buds that are consumed and concentrated.

Male plants have low potency and THC content compared to the female plants, and they are kept to mostly produce seeds. Removing the male cannabis plants from the garden enables the female plants to grow larger, seedless buds. Understanding cannabis gender and reproduction is essential to achieving the best possible harvest. However, it can be confusing.

Growers Can Look for Gender Signs Before the Plants Begin Flowering

It’s very easy to identify plant gender once plants have matured and have started to show their reproductive organs. But truthfully, waiting until this point is risky. If the males and females are in the same room, the males could pollinate an entire crop at any moment. Trying to identify a plant’s sex by height and volume alone is not fail-proof. 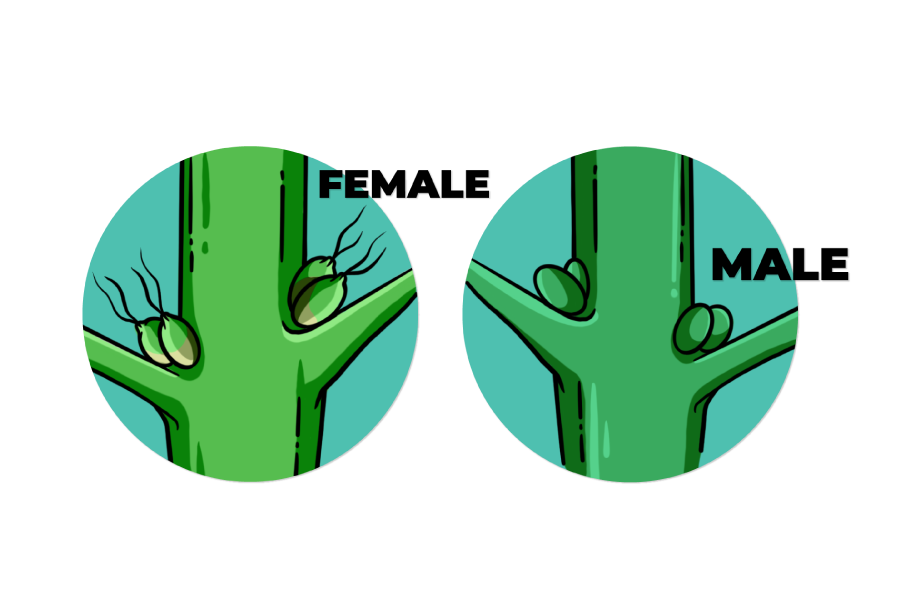 The male flower has a central part that looks like petal-shaped objects, five of which are inside of the sex organs. To the untrained eye, they look like a tiny banana bunch. With a little practice, many can catch and dispose of males long before they have the chance to pollinate females. Even if someone is just starting the homegrown cultivation process, fortunately with a few tips the plants can be sexed before it’s too late.

Look Between the Nodes

A cannabis plant will indicate its sex based on what grows in between the nodes. Nodes are where the leaves and the branches start to extend away from the stalk. depending on how quickly you’re sprouting phase took place, you might have to wait 6 weeks before you can confidently tell the sex of your cannabis plant.

Biden’s Attorney General Nominee Could be Bad News For Cannabis

The UFC Knocks Out THC from its Anti-Doping Policy

New Jersey is Harshing the Vibe of Cannabis Legalization

New Jersey legalized retail cannabis during the November elections. Laws were supposed to change on January 1st, 2020, but that is not what happened. Between the Senate, the Assembly, and Democratic Governor Phil Murphy, a stick was just tossed in the wheels of cannabis legalization in New Jersey. Those on the bike ride to recreational…

One of the most strenuously argued points of the War on Drugs was that allowing any drugs to gain a toehold in society would create a slippery slope that would end in America’s children rotting their brains on narcotics. We know now that a lot of those fear tactics don’t hold up under scrutiny—cannabis doesn’t…

Thanks to some of its participants, the DC Capitol Seige Riot set the cannabis stigma back as rioters consumed irresponsibly in the Rotunda. To help boost morale for the COVID vaccines, the Joints for Jabs campaign will be giving away free cannabis outside of DC vaccine clinics. And Texas, of all places, is flirting with…

PTSD can have far-reaching effects on health, functionality as well as on quality of living, which is why having access to effective…

Recreational cannabis legalization was a success for South Dakota in 2020, with a 54.2% to 45.8% vote passing in favor of this…

When it comes to cannabis, Maine is one of the more progressive states in the country. In 1976, Maine became only the…