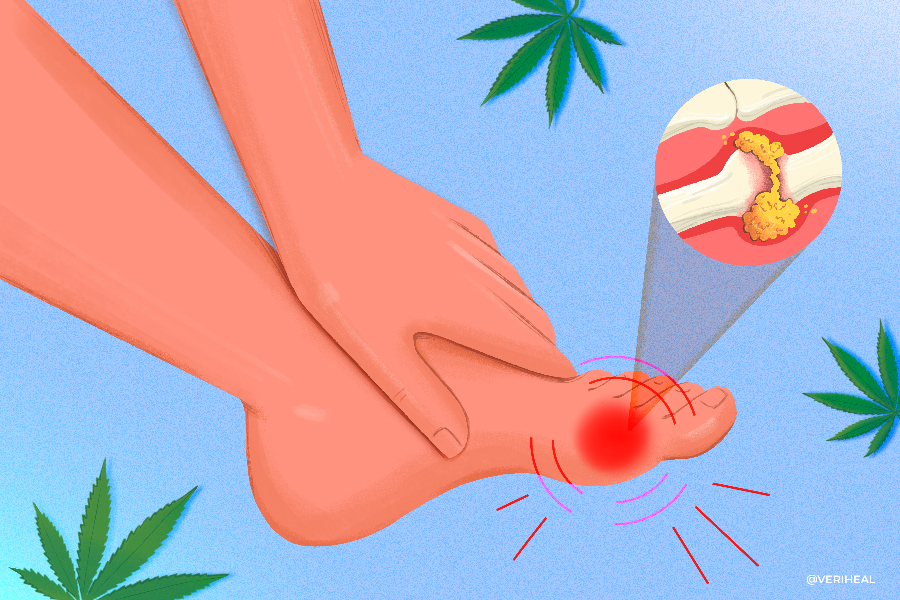 A type of arthritis known as ‘gout’ is common, complex, and can affect anyone. Patients who suffer from gout are plagued by sudden and severe spikes of pain, swelling, and more. This condition affects certain joints but is often the joint at the base of the big toe. Gout is triggered by arthropathy which is a joint disease. Luckily, the pain and inflammation from gout in joints are directly linked to the body’s endocannabinoid system (ECS).

Gout is a medical condition that is sometimes referred to as podagra when the big toe is involved. Podagra is a Greek term that translates to “foot trap” and specifically refers to gout that is in the metatarsophalangeal joint, which is the joint between the foot and the big toes. It is also referred to as gouty arthritis because it causes recurring joint pain attacks. It is considered one of the main forms of arthritis, along with osteoarthritis, fibromyalgia, psoriatic arthritis, and rheumatoid arthritis.

The biggest differences between the other types of arthritis and gout concerns the deposition of uric acid crystals in the joints, a sudden immune response, and then the type of pain experienced according to Ada Health. With arthritis, the pain tends to be more of a consistent ache as opposed to the sudden attacks, or spikes, often associated with gout. A spike of gout can take place suddenly while doing everyday activities such as walking or sleeping.

As per the Centers for Disease Control and Prevention (CDC), gout can best be explained as the inflammation of any joints; however, it usually affects the big toe as well as the lesser toe joints, ankles, and knees. The inflammation leads to some intense and limiting symptoms. The diagnosis of gout requires studying a sample of fluid under a microscope along with other tests including blood tests to rule out other causes of joint pain like pseudogout or septic joint, and determine the best course of treatment.

Gout can be caused when crystals, called urate or uric acid, start to accumulate in the joint. Urate crystals are formed when your body has high levels of uric acid in the blood. It may also commonly occur in people with normal uric acid levels. Certain disorders such as blood, kidney, and thyroid diseases can make it difficult for the body to remove excess uric acid. A diet that is high in purines can also contribute to the onset of gout. High purine foods include organ meats, red meats, oily fish like sardines and anchovies, beans, mushrooms, and certain vegetables like asparagus and cauliflower.

The following are some of the typical symptoms that patients with podagra typically experience:

How Can Cannabis Help With Gout?

People have been using cannabis to treat gout for millennia, as Chinese civilizations did in 2900 BC and merging into western medicine around the 17th century, according to Dr. Ethan Russo and a clinical review about cannabis and pain management. Thanks to the connections between joints and the ECS, cannabis could do a lot for people struggling with gout. One of cannabis’ reasons most cited for use has to do with its effectiveness in alleviating pain, swelling, and inflammation. Cannabis has compounds called cannabinoids and different types of cannabinoids benefit arthritis patients (includes gout patients) in different ways. One example from Dr. Russo points out that Δ9-tetrahydrocannabinol (THC) works as the pain reliever while cannabichromene (CBC) and cannabidiol (CBD) work their anti-inflammatory power to help reduce swelling, inflammation, and tenderness.

THC, CBD, and CBC are all cannabinoids that are found in cannabis and they work together, enhancing their individual effects when combined.  This phenomenon has been coined by Dr. Russo and is known as the entourage effect.

Medical Marijuana, Gout, and the ECS

The signaling system in the nervous system of the body is called the endocannabinoid system (ECS). This signaling system is responsible for moderating the levels of pain we feel, amongst other things. According to a review published in Cannabis and Cannabinoid Research,  cannabinoids from cannabis products interact with and stimulate the cannabinoid receptors, among other receptors in the body, which are found within and outside the ECS. When cannabis stimulates the receptors in the ECS, it leads to reduced pain perception and reduced inflammation by increasing or decreasing the levels of endocannabinoids, or fat-based neurotransmitters. It is the unique relationship between cannabis and the ECS which makes medical cannabis so beneficial in so many manners.

The current treatment options include different pharmaceutical medications, eating less purine-rich foods, weight loss, drinking lots of water, reducing alcohol intake, managing concurrent blood pressure and kidney problems, daily nonsteroidal anti-inflammatory drugs (NSAIDs), colchicine, pegloticase, and steroids. Cannabis can potentially be added to that list unofficially. Unfortunately, there is still a shortage of research on cannabis and gout specifically. However, there is promising evidence and research available on (1) cannabidiol as an oral anti-arthritic therapy, (2) cannabidiol reducing inflammation and pain in arthritis, and (3) using cannabinoids as medication for osteoarthritic knees. Research such as these, assist in indicating how cannabis may help those suffering from gout through similar mechanisms.

Among the studies above, research supports that when CBD was applied topically on rats with arthritis, their inflammation and pain were eased. Additionally in a 2020 review from the American Academy of Orthopaedic Surgeons (AAOS) supports the use of cannabis for arthritis symptoms, despite only 26% of patients were recommended to try it. In this survey of 629 people suffering from arthritis (defined in the study to be chronic musculoskeletal pain), 1 out of 5 used CBD to ease their pain and inflammation. Doctors involved in the studies are also hopeful for the possibility of replacing opioid medications with medicinal cannabis. Of those who tried cannabis in this survey, 90% reported it to be effective and 40% reported it decreased the use of other pain medications.

Many patients prefer CBD-only topical products or topical products that contain small amounts of THC as they can easily be applied to the skin over the affected joint instead of smoking cannabis or taking edibles.  Many patients also either take CBD oil orally or apply it to the skin as well. Topical methods do not cause enough systemic absorption to cause a “high”, but cannabinoids like THC and CBD may still bioaccumulate over time. According to Dr. Russo, if you do decide to smoke or take medical cannabis orally, it is important to start with small doses and increase it over time.  You don’t necessarily have to feel the side effects from marijuana use, particularly the psychoactive ones, to achieve relief from gout pain or inflammation.

Thankfully there are ways to prevent or lessen gout flare-ups that are easy measures that don’t always involve medications, although prescriptions are still safe and effective for most people. Uric acid or urate crystals that build up in patients with gout can be partially controlled through a variety of lifestyle measures, says the Mayo Clinic. These easier interventions include:

Gout can be one of the most painful types of arthritis which is why, along with prevention, having effective and less-risky treatment options available is important. In addition to the important preventive and established measures, medical cannabis can be an easily accessible, affordable, effective, and all-natural option for pain, inflammation, and accompanying symptoms. Cannabis can also be consumed in a variety of forms such as being eaten, applied topically, or inhaled.

Even though there is no research available specifically related to gout and cannabis, professionals are feeling confident that the medical benefits from cannabis for arthritis will also apply to gout.

Thank you for the informative article.

Thank you for writing this article. I personally know a guy that has battled with pretty bad gout. His attacks even with medication would last 10-14 days. He would suffer from these attacks 3-4x per year. He started smoking marijuana a little over a year ago and has not had a single attack since and has not changed his diet or slowed up on his beer drinking. So, I’m confident marijuana will have a big impact on patients that suffer from this nasty disease.

I want to thank you for the information. I am reading this article and have found useful information to help with my research for a paper I am writing in college. I also found information that can help my daughter who suffers from gout. At times it is so bad she can not walk or even get out of bed. This was a big help thank you again.

If I went to a dispensary what would I order? Flower or edibles? I have gout in my left foot and hurts pretty bad.
TIA, Christopher

Thank you so much for the helpful information. I am currently struggling with arthritis leading on to gout and I have been searching for some treats and I’m so thankful I found you! ‘Ofa atu..

I just wanted to mention that Cannabis use for a small percentage of people to treat Gout/Arthritis can make symptoms much worse as I have found out myself. At first, I thought it was just a coincidence when after taking some cannabis my gout flare pain increased significantly. The second time I thought another coincidence however unlikely and the third time confirmed cannabis for me treating Gout was a big no-no. I don’t want to spoil the party but I think folks with Gout considering cannabis use should be aware it could have the opposite effect. I had high hopes for using cannabis to treat myself during a flare-up so it did come as quite a shock as I’m usually one who doesnt suffer any side effects with any medicine.