Does Cannabis Pose Any Risks for Male Reproductive Health?

Research reveals that cannabis can impact male reproductive health through reprogramming sperm, which may have implications for any baby born from such sperm.  The study, published in the Epigenetics journal, explains that there is little known about the “reproductive effects of paternal cannabis exposure.” Not only did they find that cannabis can alter sperm, but they also found that men who consume cannabis were associated with significantly lower sperm counts. The researchers involved in the study suggest that cannabis use can have “pre-conception paternal reproductive risks.”

The Research on Cannabis Reprogramming Sperm

The study begins by explaining that the mean paternal age for one’s first child is around 27.4 years in America and that this age group has a relatively high number of cannabis consumers. According to the study, 35% and 23.4% of male cannabis consumers reported having used cannabis in the past year and month. All of which means that first-time fathers are likely to have been exposed to cannabis “at or around the time they conceive.” Most of the research concerning cannabis use pre- and post-conception have been focused on maternal use which has left “a gap in knowledge about cannabis use effects on paternal reproductive factors.” 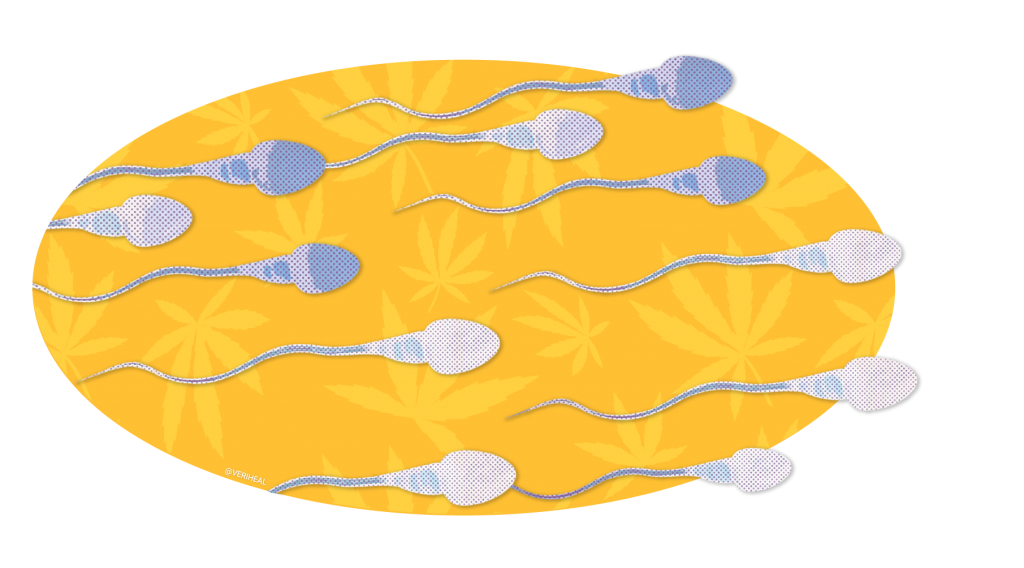 The human participants were all similar in terms of age, ethnicity and other baseline characteristics including height and weight. The participants were also controlled for potential alcohol use disorders (AUD) and while most of them drank, none met AUD criteria. Additionally, there were no differences between the cannabis users and non-users in terms of the last time they ejaculated, “intervals between ejaculation and analysis, semen volume, semen pH, percept mobility or percent normal morphology.”

What are the Impacts of THC on Male Reproductive Health?

In both rats and humans, cannabis affects a variety of different genes involved in two different pathways. One pathway is responsible for the organs reaching full size and the other contributes to suppressing tumors and cancer. One of the researchers, Susan Kay Murphy, stated that, it “just blows my mind” and that she wonders “how do you even reconcile that, biologically, an entire pathway is going to be affected by these changes.”

That being said, it is important to understand that this does not necessarily mean it will cause these babies to be more vulnerable to cannabis since  the study was based on a very small sample size and did not control for the concentration of tetrahydrocannabinol (THC) consumed by the human participants. However, Murphy did clarify that they tested the THC in urine and found a correlation between higher THC counts and more changes.

Bobby Najari, a urologist, explains that while the study is small, it has concerning implications. He stated that “I think one of the important positive things about research like this is that it may further motivate men to change their health,” and added that “It’s one thing to talk about sperm count, another when you’re talking about the potential health of the child.”

The THC consumption led to results which indicate that “at least 6,640 CpGs whose methylation status is altered in conjunction with cannabis use,” and they found “enrichment of altered CpG sites associated with genes involved in the Hippo signaling pathway and in Pathways in Cancer, findings that were replicated in THC-exposed rodents.” The term ‘CpG sites’ is used to distinguish the linear “DNA sequence in which cytosine and guanine bases are connected by a phosphate group base pairing of CG.”

In the study, the researchers explain that the THC components appear to cause the changes to the two aforementioned pathways, but not to “genes per se.” They go on to state that those two pathways appear to be the targets of exposure “although the reasons for this and mechanisms are presently unknown.”

Meanwhile, a more recent study supports the findings by stating that “the strongest evidence of cannabis induced alterations in male fertility is in the category of semen parameters.” This study, published in the Journal of Urology, found that cannabis not only reduced sperm count and concentration but also induced abnormalities in sperm morphology, “reducing sperm motility and viability” as well as “inhibiting capacitation and fertilizing capacity.”

While both studies suggest potential adverse impacts on sperm, their difference lies in the fact that the first saw changes in two vital pathways while the second found changes to motility and viability. Both studies conclude with the fact that more research needs to be conducted since theirs are only suggestive. Nevertheless, parents who are trying to conceive should cease cannabis consumption significantly ahead of attempts to conceive.

If you would like to get a better understanding on the impact of cannabis on the ability to conceive, be sure to check out this article.

Can The Impact On Sperm Be Passed Down?

Murphy and her team explain that it is unclear whether the impact of cannabis on sperm can be passed down since they are still unsure whether the changes caused by environmental exposures can do so. What they do know is that “a great deal more sperm DNA methylation is retained and not erased…”

As as example, they explain that changes caused to the sperm of an obese man, as a result of being obese, are more likely to have children with a predisposition to obesity, which is “suggestive of potential intergenerational heritability.” However, as previously stated, it is still unclear whether changes to sperm as a result of cannabis can be inherited by the babies born from such sperm.

While the results of both studies appear to be frightening, consumers of cannabis can easily avoid the risk by ceasing cannabis consumption well ahead of trying to conceive. Rather than allowing oneself to be frightened away from the therapeutic properties of cannabis due to research such as this, consider being thankful for the warning for circumstances where you and your partner are trying to expand your family.