Home Research Is It Safe to Consume Cannabis While Taking Antibiotics?

Is It Safe to Consume Cannabis While Taking Antibiotics? 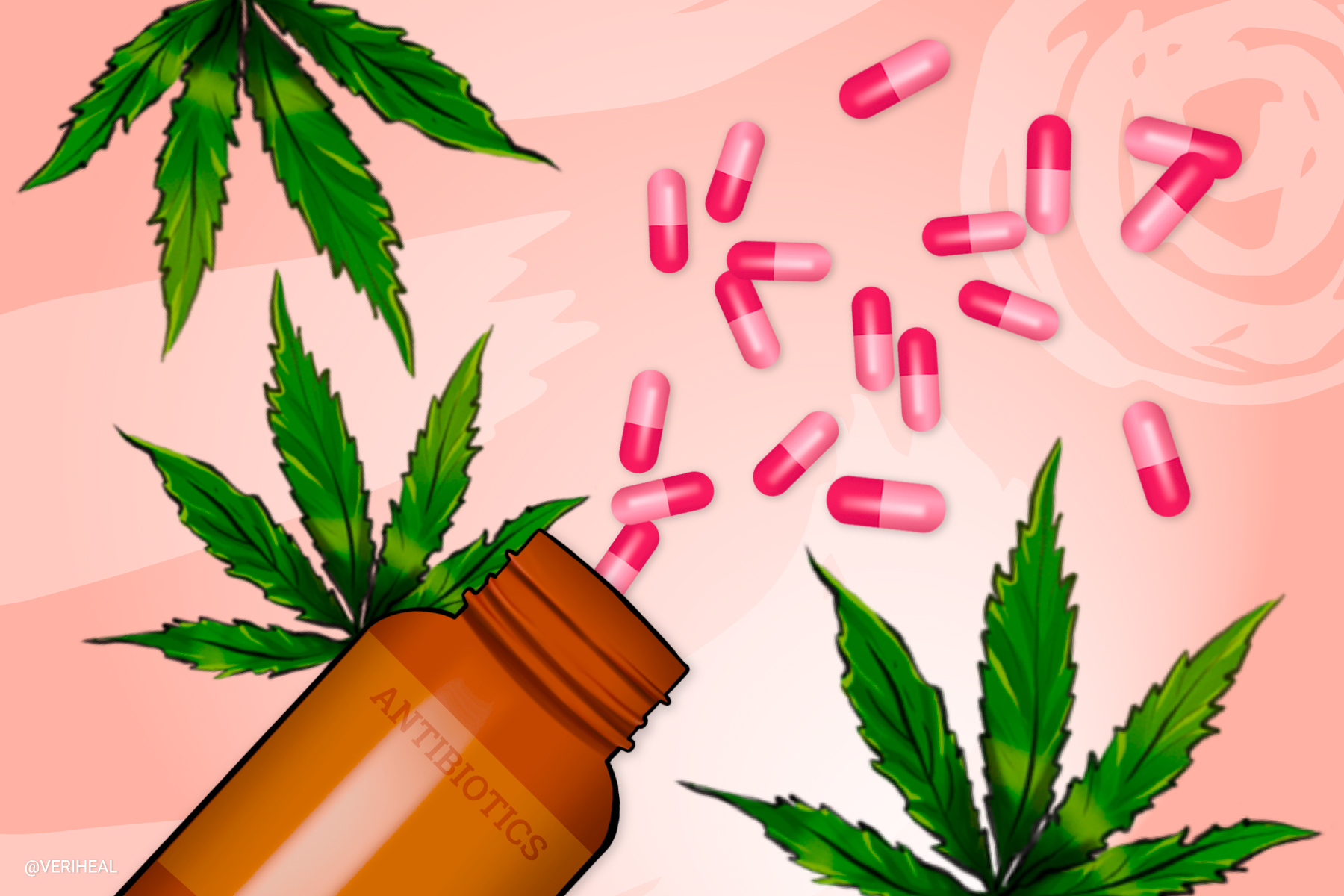 Many use cannabis for its pain-relieving properties. Smoking flower, or having a cup of cannabis-infused tea, can be just the thing to help you deal with the symptoms of chronic pain. There are many who choose to use cannabis to combat pain and it is even used when one has a cold or the flu to clear the head and relax the muscles, making one feel a little better. Cannabis is also a powerful anti-inflammatory, which is another reason for its continued increase in consumption across the globe.

However, what happens when antibiotics are involved? Many pain and inflammatory-based conditions or illnesses may have a treatment plan that includes antibiotics. Which is how many people know that it’s vital to be careful of drug interactions, especially when antibiotics are involved. This also explains the reason for your doctor inquiring to know which medications one is currently consuming, or even meds recently consumed. Read on to learn more.

While cannabis has proven safe and effective in alleviating an array of conditions and illnesses, if the condition or illness requires antibiotics, will it be safe to consume cannabis, too? Antibiotics have been known to render certain medications less effective when consumed simultaneously due to their interactions. When treatment plans are complicated by consuming interacting drugs, including cannabinoids, either drug levels can become altered. This may potentially pose a health risk.

However, a 2014 systematic review study suggests that CBD, CBN, and THC interactions with pharmaceutical drugs are generally low risk according to the available data, but further research is still necessary to determine the specific effects of metabolites and other effects. Certain medications can still be used with caution in conjunction with cannabinoids, so it’s important to tell your doctor about cannabis use first. So, in light of this possibility between antibiotics and cannabis, let’s assess the impact on effectiveness and risks.

What Are Common Antibiotics?

There are hundreds of antibiotics with the potential to react with cannabis. Penn State News published a study which identified 139 common pharmaceutical medications that have the potential to react with cannabis. However, just because they only identified 139 out of hundreds does not mean that there is no risk of negative interactions among the rest. The following pharmaceuticals are the top ten most commonly used antibiotics, which will be looked at against the Penn State list.

Dr. Kent Vrana, a professor and the chairman of pharmacology at the College of Medicine, along with Paul Kocis, compiled a shorter list of 57 medications based on the fact that they may not operate as intended when cannabis is being consumed, too. On the list these professionals compiled, the only antibiotic listed on the narrowed list is clindamycin. This also points out that the available pharmaceutical data this study draws from are still limited and incomplete, among other study limitations. Other safety data show such interactions likely pose a low but not insignificant risk.

Dr. Vrana and the rest of the research team wanted to provide physicians with comprehensive information to make safe prescription choices for the sake of their patients. Dr. Vrana stated that “it’s important for medical professionals to consider the list when prescribing medical cannabinoids and how it may affect other medications a patient is taking.”

Will Cannabis Reduce the Effectiveness of My Antibiotics?

You don’t want to see the effects of the antibiotics you’ve been given neutralized, nor have higher or lower levels of prescriptions or cannabis than intended. If your doctor prescribes an antibiotic, they want you to take the full course of medication to make sure your infection is killed completely and also reduce the odds of developing antibiotic resistance in your body.

Fortunately, the evidence so far seems to suggest that cannabis may not significantly interfere with antibiotics. The antibiotic rifampin can decrease levels of CBD when taken together. However, the two are still well-tolerated when taken together. Caution should be used if you are also going to add on other drugs that are metabolized in the same way. More human research is needed to determine the exact effects and safety of cannabinoid and antibiotic co-administration, especially in the long-term and for special populations.

Additionally, cannabis has shown in studies to have antibacterial properties itself, proving somewhat effective against the difficult-to-treat MRSA bacterium. It may only be a matter of time before doctors are ready to add cannabis to the regimen of antibiotics they prescribe for patients who are having trouble kicking a nasty infection. Based on limited data to date, you can likely use cannabis while on antibiotics and the antibiotics should still do their job just fine. Remember that antibiotic treatment should be monitored by a qualified professional.

What Are the Risks of Using Cannabis While on Antibiotics?

The antibiotics will probably still be effective based on limited data to date, but that doesn’t mean that they aren’t without risk. It’s important to understand that different drugs use different metabolic pathways in the liver. The metabolic pathway that processes cannabinoids is the same one used by many prescription drugs, including some antibiotics.

Is that a problem? The short answer is likely not. Despite using some of the same metabolic pathways, most medications don’t interact negatively with cannabis. And if they do, the interactions are so far reported as non-life threatening.

The somewhat longer answer is that one can’t be sure since satisfactory testing and research has not yet been conducted on cannabis and its full effects on the body, including its interactions with other pharmaceutical medications. It’s important to remember that every person is different, too. However, this is also not to say that cannabis use on its own is risk-free. There are short-term adverse events like dizziness, tiredness, dry mouth, and cognitive distortion while the long-term effects of cannabinoids are yet to be known.

Alternatives to Marijuana While on Antibiotics

While cannabis likely may not negatively interact with antibiotics, some may choose to consider alternatives to marijuana while being on antibiotics. One viable solution could be consuming cannabidiol (CBD) isolate products instead and avoiding full- and broad-spectrum CBD products. By doing this, the risks are reduced as additional psychoactive and intoxicating cannabinoids are reduced. Additionally, scientists have found that CBD could one day become an antibiotic of its own.

A study conducted in Australia, led by Mark Blaskovich, found that CBD “killed all the strains of bacteria they tested in a lab, including some which were highly resistant to existing antibiotics.” What’s even more impressive when considering CBD as an antibiotic candidate is that the study found no build up of resistance, even after 20 days of consuming CBD. The researchers also found that CBD has excellent activity against biofilms (this could potentially include dental  plaque); against four Gram-negative bacteria (including the bacteria responsible for gonorrhea, meningitis, and airway infections like bronchitis and pneumonia); and reaffirmed it was effective against MRSA bacterium.

If you would like to avoid cannabis as a whole while being on antibiotics, one can consider consuming other botanicals, which also contain beneficial cannabinoids. Be sure to tell your healthcare providers of any health supplements you are taking, and remember that neither these nor cannabis can replace antibiotics.

Summary of Alternatives to Cannabis, or Marijuana, While Taking Antibiotics:

You should first consult with your doctor before doing so, but it will probably be okay with them to take antibiotics and consume cannabis. This also presumes you are not worsening a lung infection with inhalational methods, and are aware of the side effects of antibiotics and potential adverse events of cannabis as well. Physicians are the experts on the antibiotics being prescribed, and they’ll be able to tell you with authority whether or not it will be appropriate for you.

Remember that despite the legal status of cannabis where you live, bringing questions to your doctor is always allowed, and your conversations are confidential. Your doctor will provide you medical advice without legal judgment. Also, remember that if you are still uncertain after consulting your primary physician, you can get a second opinion.

Lastly, it will be best to consume cannabis with care and in moderation at first, while avoiding methods of consumption that involve combustion as well as switching to CBD-only products for the duration of the antibiotic course to minimize adverse effects of high-THC cannabis.

This blog post was originally written by Kat Helgeson.

Hello, I am currently taking antibiotics for H Pylori and I don’t know if I can smoke cannabis while taking the antibiotics. The reason I ask this question is because it’s hard to eat with H Pylori but cannabis helps me eat and helps with the pain. I would love some feed back.

While I have not personally seen any negative interactions when taking antibiotics in conjunction with cannabis, we definitely encourage speaking with a healthcare professional as they would have the best advice for your specific issue. We do have an article on cannabis and gram-negative bacteria as well if it’s any help!

Helpfull. Taking amox for inflamation. Withholding smoking till I feel better. To much coughing and throat irritation.