Home News Is There Any Hope for the Remaining Fully Illegal States?

Is There Any Hope for the Remaining Fully Illegal States? 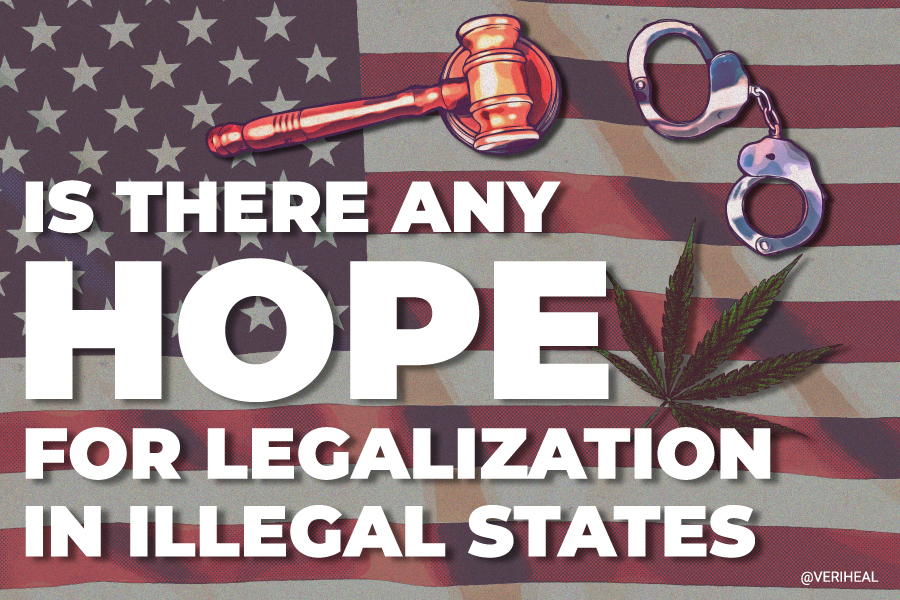 Cannabis legalization, rescheduling, or decriminalization on a federal level in 2022 is an area where many people have high hopes. Although President Biden promised to put cannabis reform at the forefront, thus far he has not delivered. Currently, the United States federal government has left cannabis legalization to the states. Of all of the states in America, only three—Idaho, Nebraska, and Kansas—still cling to outdated laws built on the foundation of racism and misinformation and remain fully illegal when it comes to cannabis. Any and every aspect of recreational or medical cannabis is illegal in these states.

However, times are changing and elected representatives in these states can no longer continue to support outdated information about cannabis and ignore the will the people. Many officials are beginning to come to terms with this and are starting to make changes.

Kansas is a state suffering from debt like many others. They have legalized gambling and increased the percentage of alcohol to try to help rally tax dollars, but this has yielded limited results. The state is currently pulling money from other departments such as education to cover its debts. The current governor of Kansas, Laura Kelly, has expressed willingness to support a medical cannabis bill encouraging elected representatives in the state to put a good one on her desk. A medical marijuana bill was passed in Kansas by the House and is now awaiting consideration with the Kansas State Senate.

Nebraska is making some effort to push positive cannabis reform laws. They reduced the penalty for possession of an ounce or less of cannabis to an infraction. However, distribution of any amount of cannabis can still land you in prison and with some hefty fines. So, there is a long road ahead toward decriminalization and legalization in Nebraska.

Idaho is attempting to embrace cannabis legalization for medical use. The Idaho House passed a bill allowing cannabis to be used as an ingredient in topical pain relief products. This is a big win for patients with conditions that medical cannabis can treat in Idaho. The tides are beginning to shift in favor of cannabis legalization—albeit slowly—even in holdouts like these states.

The Federal Government Stalls Legalization: States Pick Up the Slack

Cannabis legalization in 2022 remains an area that many people have high hopes for. The US federal government has been tossing around the rescheduling and legalization aspects of cannabis for some time now.

One avenue for cannabis law reform at the federal level is the Safe Banking Act, which would facilitate access to financial services for the cannabis industry. The Safe Banking Act has seen successfully passed six times in the US House of Representatives, but unfortunately is expected to die again in the US Senate.

Still, many remain hopeful that the federal government will do the right thing and represent the will of the American people. As more states install legal cannabis programs it becomes harder for holdouts to justify procrastinating cannabis law reform when their constituents favor legal cannabis. So, which states are heeding the will of the American people and moving to reform state cannabis laws?

Which Fully Illegal States in the South Are Reforming Cannabis Laws?

Mississippi state government has had a battle with cannabis laws recently. Citizens in the state overwhelmingly supported medical cannabis legalization, and voted for it at the ballot box.  However, that vote was overturned due to a technicality about two laws being voted on at the same time. Eventually, the state corrected this and passed the medical cannabis law

Recently, Kentucky’s GOP-controlled House of Representatives voted 59-64 to pass a bill giving patients with certain conditions access to a state medical cannabis program. It was a huge victory for this fully illegal state. Lawmakers in Kentucky are also looking at a limited program permitting research of CBD. CBD most commonly comes from Industrial Hemp, which was made legal by the Farm Bill.

Next up is South Carolina. The South Carolina Compassionate Care Act was passed in Senate with a vote of 28 to 15. It moves to the House of Representatives, where if approved and then signed by the governor, it would allow for medical cannabis products such as gummies, edibles, and oils while strictly prohibiting any and all smokable or combustible forms of cannabis.

In fully illegal states, policy makers often base their information—and thus policy—related to cannabis on antiquated stereotypes of the plant, debunked myths, and blatant misinformation. Tennessee, North Carolina, South Carolina, Alabama, Kentucky, Georgia are states where getting caught with cannabis can have serious consequences, especially if you’re not a patient. Despite progress in some southern states, there is a long road ahead for cannabis policy reform in these places.

Many states have gotten tired of waiting for the federal government. With no guidance from the federal government, states have taken it upon themselves and passed cannabis legalization, and created licensing to facilitate businesses engaging in cultivation, distribution, and sales. They have created tax infrastructure, as well as quality assurance and industry monitoring of many different facets of the legal cannabis industry through organizations such as Marijuana Enforcement Tracking Reporting and Compliance (METRC).

With more states establishing these models for success and accountability in legal cannabis, other states are looking to advance on their current cannabis laws in 2022. Among those states are Minnesota, Delaware, Rhode Island, New Hampshire, Hawaii, South Dakota, Missouri, Arkansas, Ohio and Oklahoma.

IT seems there are states that can’t buy a mention. One is Arkansas, and the other is Indiana. You managed to skip Indiana as it is a GOP led state with ignorance at the helm, and stigma running the show. I mean Arkansas has taken the leap and they are drooling over the money coming in. What is going on in Indiana? Who’s footing the bribery bill in that state? I mean, WOW.