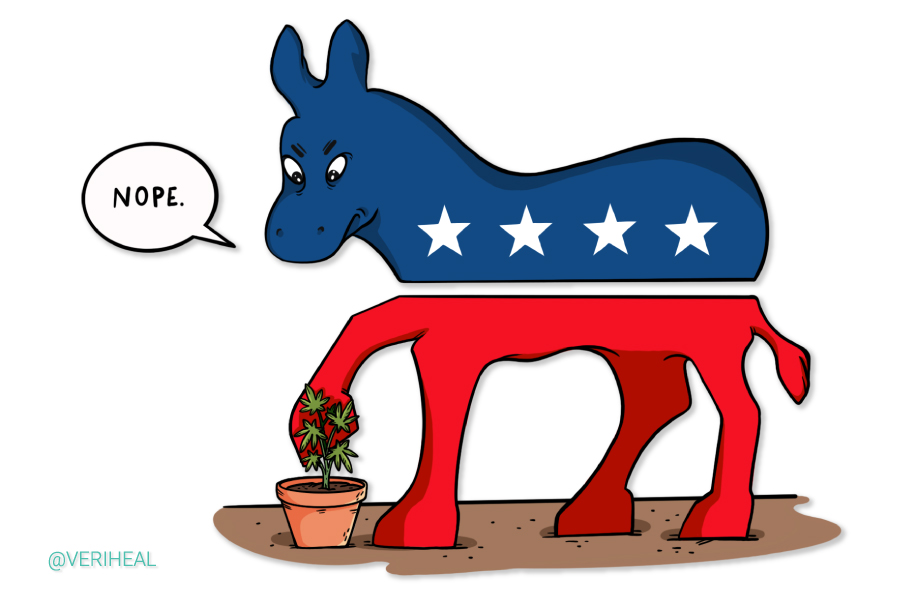 The politics of pot are something that many find to be mundane. Like me, many would love for the federal government to deschedule cannabis and move on to more significant issues. Unfortunately, in reality, we all know that it is not that simple, nor will it come that easy. However, in recent years, we have started to see much more support for cannabis reform from political leaders. This is something that many advocates are very thankful for. While more than half of the states in the U.S. have legalized cannabis for medicinal purposes, the democratic party refuses to include cannabis legalization reform in their platform.

A recent vote by the Democratic National Committee did not go in favor of cannabis activists and patients. Delegates of the committee clearly are not listening to the will of their constituents as 105 voted no while only 60 delegates voted yes to including cannabis legalization in the party platform late last month. The platform was initially drafted by a 15-person panel and included 80 pages of planks based on recommendations by joint policy task forces. The same day as the vote, 180 delegates virtually met to amend the original draft further.

The original text, as drafted, supported the decriminalization of cannabis and the legalization of medical cannabis. It also stated that states should be allowed “to make their own decisions about recreational use.” As the introducing delegate, Dennis Obduskey noted that this is a step back from previous platforms such as 2016’s, which provided “a reasoned pathway for future legalization.”

Democratic Support for Legalization is Elevated

Historically, Democrats have shown more support for cannabis legalization, which leaves many scratching their head in disbelief that after the progress we have seen that the platform would not support legalization in today’s age. According to a 2019 Gallup poll, an average of 66% of Americans favor the legalization of cannabis. That number among Democrats specifically, however, is higher coming in at 76%.

Leaders are Disappointed But There is Still Hope

Democratic political leaders across the country were shocked when the draft platform did not pass with the support of legalization. Progressive Lieutenant Governor of Pennsylvania, John Fetterman, even went to Twitter to discuss his dissatisfaction. Later this month is the national convention, and before then, approximately 4,000 members of the DNC will vote via mail-in ballots on whether or not to make changes to the platform. With any luck, these individuals will listen to the will of voters as well as medical and science professionals that back the medicinal value of this widely misunderstood and criminalized plant.

According to the Huffington Post, Iowa County Supervisor Stacey Walker and Obduskey both urged delegates to vote in favor of reform stating that the “current federal laws disproportionately affect black people.” Walker was quoted saying the following;

“I’m imploring all of you to approach this with an open mind and heart. Do something big here. Take one small but meaningful step toward changing the course of history. If my Black life matters to you, you will consider this amendment. We want to get in good trouble today, and I urge you to do the right thing and support it.”

The Future is Now

Unfortunately, the plea fell upon deaf ears. We are living in a time where the amount of knowledge available at our fingertips is unparalleled to any other time in history. Our ability to join forces in the masses is greater than ever. The need for cannabis reform has brought together people of all races, religions, sexual orientations, lifestyles, income brackets, and careers with one common goal, and that is to create a better future for all.

By embracing and supporting cannabis legalization at the highest level to the fullest extent, the Democratic Party could be a leading force on the right side of history, if only they would listen to the data, the science, the facts, and the individuals they are elected to represent. If officials such as this do not listen to these aspects, they could find that come next election, they might not find the same amount of support.

The Benefits of Legalization Outweigh Even the Greatest of Risks

Cannabis legalization offers benefits on various levels. From medical benefits and the potential ability to save millions of lives to the likely billions in revenue it could produce in our struggling economy, everyone benefits from legalization. It is high time that our leaders, such as those within the Democratic National Committee, start to support what is best for all and when it comes to cannabis, that is full legalization. Hopefully, the pleas of their peers and constituents will be enough for the DNC to vote in favor of including cannabis legalization in their platform prior to the national convention later this