A team of researchers understood that one of the biggest uncertainties for many who have yet to decide whether they support cannabis is that there are concerns over long-term safety. The team wanted to provide some assistance with getting over this hurdle by researching the toxicity of CBD, which is well-known for its therapeutic properties and potential medical benefits. In order to assist us with getting over the hurdle of safety concern, the team made use of nematodes known as Caenorhabditis Elegans- which is essentially a worm.  But why and how would studying a worm provide any sense of certainty regarding safety for humans? What did the study find? Let’s see.

What are Caenorhabditis Elegans?

Caenorhabditis Elegans is a free-living transparent nematode that is about 1 mm in length and has a lifespan of around 2-3 weeks. Nematodes are either roundworms, threadworms, or eelworms that can inhabit a broad variety of environments. These worms are used in research because they are one of the simplest organisms which contain a nervous system. Caenorhabditis Elegans is also a non-hazardous, non-infections, non-pathogenic, and non-parasitic organism. The study also explains that “Caenorhabditis Elegans is one species that has gained widespread acceptance in preclinical models of lifelong toxicity associated with drug exposure, due to their transparency at all stages of life” along with the following.

These worms are used in research because their genomes have “functional counterparts” that are found in humans- thus making it an extremely useful model for human diseases. They can act as models for neurological disorders, congenital heart disease, and even kidney disease. The worms can be screened with thousands of potential therapeutics which are potentially beneficial for diseases. Additionally, studying these worms “could hold the key to counteracting the effects of aging in humans as well as providing clues about cancer, diabetes and other diseases”.  This species has intact and metabolically active digestive systems, reproductive systems, endocrine systems, sensory systems, and neuromuscular systems.

What the Study Revealed About CBD

The team of researchers decided to study the “effect of cannabidiol on the long-term toxicity and lifespan in preclinical model caenorhabditis elegans” since the Caenorhabditis Elegans’s genes have an estimated 60-80% of human ortholog. The team examined short- and long-term exposure to cannabidiol (CBD) where the worms were administered a range of CBD and then were examined against the control worms. In other words, the researchers had worms that were administered CBD and worms who were not administered with any active drug but both were subject to testing in order to identify the true effects of CBD.

CBD Impacts on Motility and Mortality

In order to assess acute toxicity, the team administered between 0.4 microns to 4 millimeters (or 4000 microns, 0r 4mg) of CBD to the worms. They then assess the mortality and motility of the worms who received CBD compared to those who received nothing. Mortality refers to the state of being subjected to death while motility refers to their capability of movement. The results of the toxicity test were that none of the worms died. This means that the CBD was not harmful or unpleasant in a pervasive or insidious manner. As for the motility, most doses of CBD did not have any significant effects on their ability to move, but it should be noted that 4000 microns of CBD did have a significant negative effect on their motility.

The thermotolerance was then examined by administering the same range of CBD, 0.4 to 4000 microns, and then assessing the Caenorhabditis Elegans survival rate compared to the control worms. Thermotolerance refers to “the ability of a cell or organism to survive a normally lethal heat stress” and the results were scored during assessment based on that ability. Once again, the control worms did not receive any active ingredients but were subject to the same heat stress. The results of this portion of the study are quite interesting in the sense that only a certain dosage of cannabis was effective in increasing the Caenorhabditis Elegans’ ability to survive the heat stress.

The results of the thermotolerance testing showed that only 40 microns of CBD was able to increase resistance to heat. This very small amount of CBD was able to increase the heat resistance of the Caenorhabditis Elegans by 141% compared to the control worms. The researcher also found that it extended their expected life spans when they stated that “whole-life exposure of C. elegans to 10-100μM (microns) CBD revealed a maximum life extension of 18% observed at 40μM  CBD”. 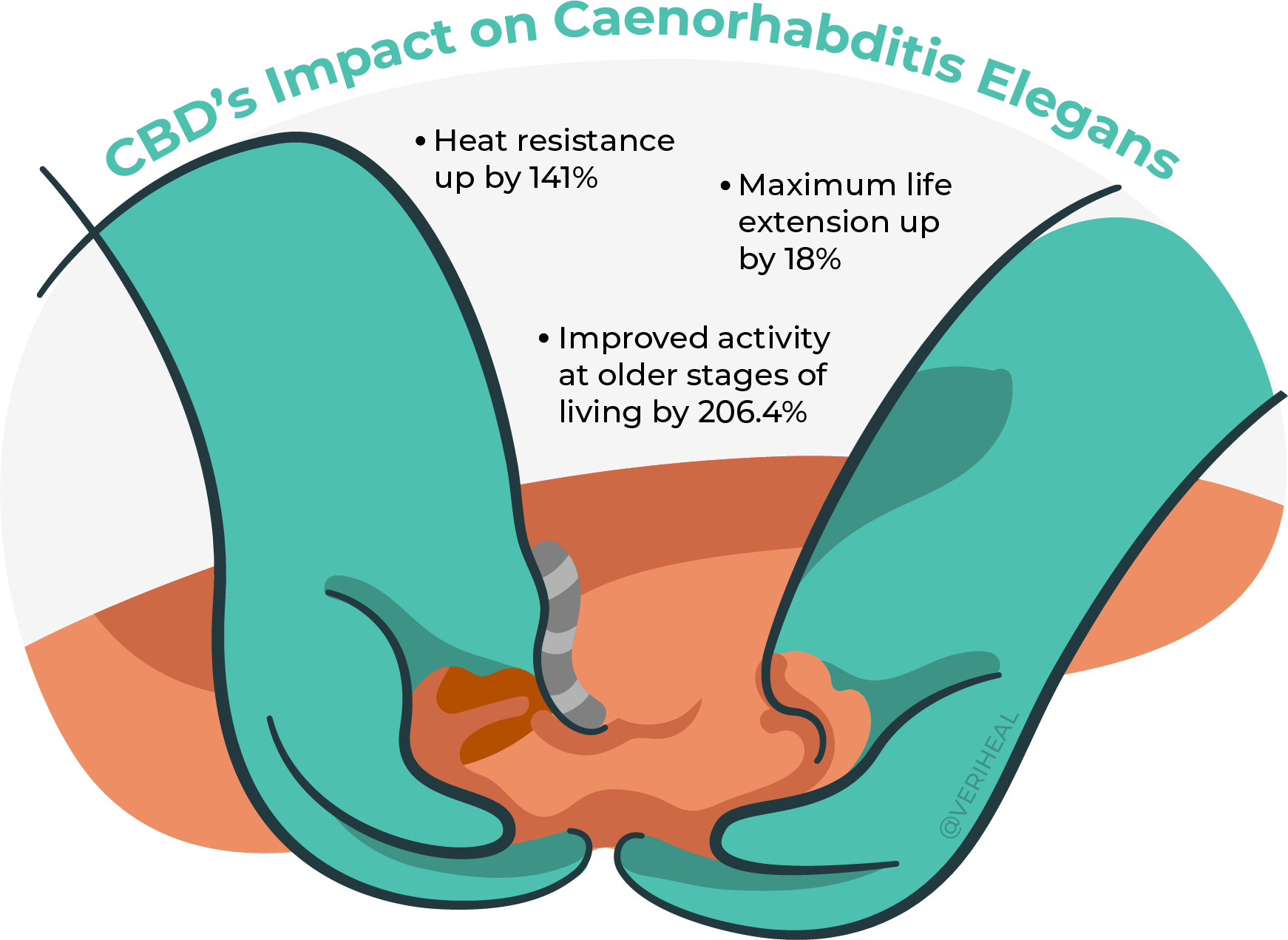 Why This Research is Necessary

The team stated that “the objective of this study was to examine the effects of CBD on acute and lifelong toxicity, lifespan, and aging as measured by mortality and motility” and that “this study addresses critical gaps in long-term CBD toxicity, and helps inform the FDA’s evolving CBD regulatory framework”- and we hope it does. This study did found that that life span was extended, heat-stress resistance increased as well as improving activity at older stages of living by almost 206.4% compared to controls.

Research like this is becoming increasingly important and necessary in order to clear up questions of concern or points of uncertainty. It also opens up a path of more questions. For example, if CBD expands life span and increases activity in older stages of life, how can we take advantage of this as humans to receive the same benefits? Another example of a question, which may be way out there, but is there a way to use the CBD to improve the heat-stress resistance of the planet since it keeps getting warmer and warmer. For now, those questions will only be pondered upon but we can take comfort in the increase in research which further supports the safety and efficacy of cannabis.