Does recreational cannabis legalization contribute to a spike in consumption? According to a September 2021 study published in the JAMA Network Open by a team of researchers at Columbia University Mailman School of Public Health, yes—but only among certain demographics.

The insightful study’s findings revealed that in comparison with the period before recreational cannabis laws were enacted across the United States, adult-use cannabis law enforcement increased the likelihood of the plant being consumed (at least once) in the past month or past year among Hispanics, non-Hispanics, Caucasians, and other races/ethnicities.

“Until this study, little was known about changes in cannabis use outcomes by race or ethnicity following passage of recreational cannabis laws among states that already had passed medical cannabis use laws,” said the associate professor of epidemiology at Mailman School of Public Health, Silvia Martins, MD, Ph.D.

On the other hand, Martins and her team of researchers claim that legalization did not contribute to a rise in frequent cannabis consumption among the aforementioned groups since the year 2017. Additionally, there were no noticeable changes among non-Hispanic Black individuals who cannot legally use cannabis, nor were there any apparent increases in consumption among people ages 12 to 20 of every racial/ethnic group who could not legally access the green plant.

“Furthermore, as one of the stated goals of cannabis legalization is to combat racial inequalities in cannabis legislation enforcement, it is critical to examine patterns of use in the context of persistent racial and ethnic disparities in cannabis arrests and incarceration,” added Martins, who is also the study’s first author.

As of October 2021, 18 U.S. states and Washington, D.C. have fully legalized cannabis use for adults over 21, and an additional 21 states have legalized medical cannabis.

To conduct the study, the university researchers pulled and analyzed data from the 2008–2017 National Surveys of Drug Use and Health. Additionally, from September 2019 to March 2020, researchers studied approximately 70,000 individuals ages 12 and above on an annual basis. In total, this worked out to approximately 838,600 study respondents.

Of the study participants, 65% self-identified as non-Hispanic white, 12% as on-Hispanic Black, 16% as Hispanic, and 8% as “other race or ethnicity.” Post-legalization, the frequency of past-year cannabis consumption appeared to climb among individuals who self-identified as the following: 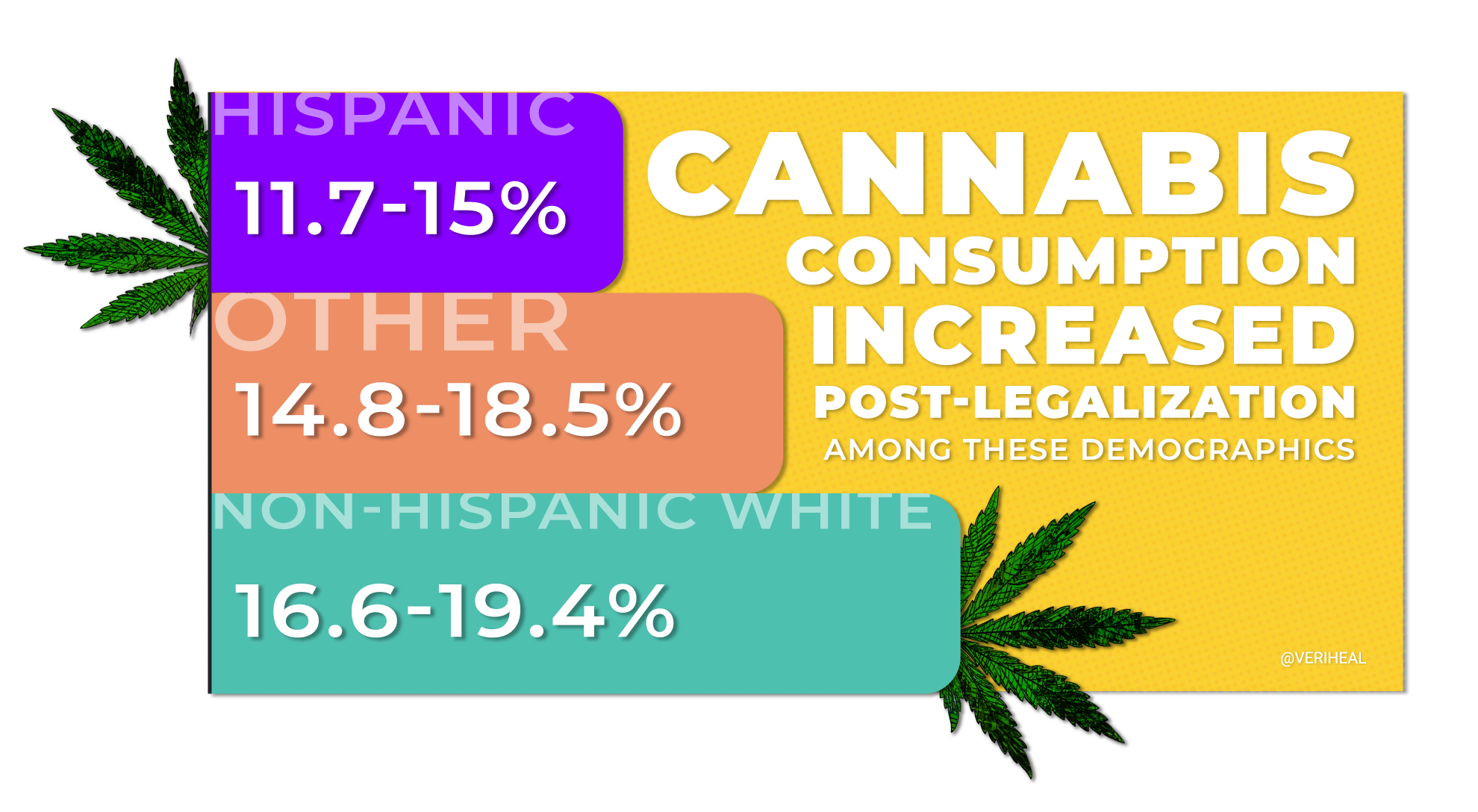 “Enactment of recreational cannabis laws is often framed as an issue of social and racial justice,” noted Martins, who is also director of Columbia’s Substance Use Epidemiology Unit. “Historically, regulation and criminalization of substances in the U.S. have targeted substances associated with marginalized groups.”

Martins’ words were reflected in the data, which revealed that lifetime prevalence of cannabis consumption was much lower for non-Hispanic Black adults in 2018 (45%) than it was for non-Hispanic white adults (54%.) Then again, the authors noted, the chances of a person of color being arrested for cannabis possession was 3.64 times higher than it was for people of other ethnicities. Moreover, they were also 1.72 times likely to face an arrest for cannabis possession in states that had legalized cannabis before 2018.

This data proves that law enforcement officials have been racist and discriminatory in their approach to penalizing people for cannabis-related incidents.

Looking to the future, the researchers stress the importance of assessing unintentional and intentional outcomes that could potentially be attributed to the approval of recreational cannabis policies across the U.S. This, they say, should be prioritized to ensure that adult-use cannabis law enactment stimulates better racial/ethnic equity and abides by anti-racist visions.

Listed below are the study’s co-authors:

This would be the natural reaction of a lift of prohibition of anything. A lot of people were not willing to buy possess and consume a substance labeled a felony and the devils weeds lol. Lose your job, your freedom , your peace of mind for something so otherwise relatively harmless. The illegality alone kept many people from using cannibis and depending on alcohol for the end of day reset . The federal stigma has to be lifted . Promise made and often broken by lying leader in Washington .