The Government Encourages Doctors to Treat Cannabis Patients as Addicts 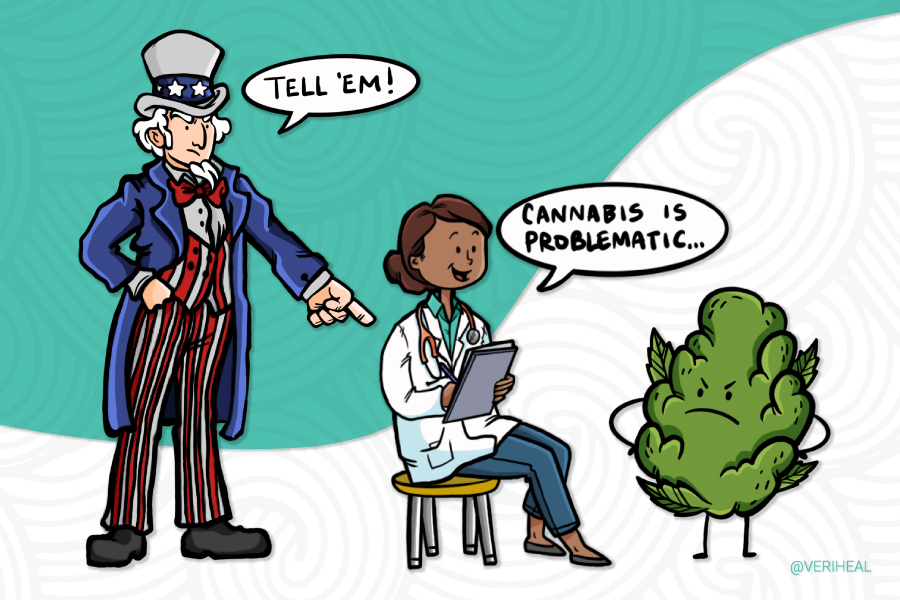 Once again, our federal government has turned a blind eye to the health of the nation and focused more on profit over patients. In a recent announcement put out in the Journal of the American Medical Association, the United States Preventive Services Task Force (USPSTF) recommended that primary care physicians screen patients for what they call “unhealthy drug use.” In the definition of unhealthy drug use, cannabis is listed while alcohol and tobacco are not. The USPSTF is made up of 16 experts that specialize in prevention and primary care medicine. The USPSTF is managed by the US Department of Health and Human Services.

Fueled by a Government that Still Can’t See the Truth

The United States of America provided the fuel to the fire behind cannabis prohibition beginning in 1937. Behind the campaign of racism and lies, they painted a picture of cannabis as being the devil’s lettuce. The government is supposed to represent the people, yet they still hold their draconian stance supporting prohibition. Ultimately the USPSTF is telling doctors to diagnose cannabis consumers as drug addicts.

Of course, the federal government is assuming that information between patients and doctors is truthful. This is not the case, however. A 2010 study of patients in the state of Virginia showed that “Primary Care base screening missed more than 60% of those with unhealthy alcohol use.” Why is this? Simply put, it’s a lack of trust between patients and doctors. When doctors are asking patients questions about things such as alcohol, tobacco, and drug use, they often lie.

A Lack of Knowledge and an Absurd Request

Asking doctors to identify anyone who consumes cannabis as a drug addict is absurd. The theory that cannabis is a gateway drug has been debunked many times. Statistics are showing places that have legal access to cannabis are doing exactly the opposite of what prohibitionists have been saying for years. Crime rates are not going up. Stoned people are not causing accidents all over the roads and highways. Children and teens are not using cannabis more because it is readily available. When it comes to cannabis, many doctors are very ill-informed. Even after attending med school, the topic of the endocannabinoid system will draw a blank stare. The average educated cannabis consumer can help educate most doctors as to what this unique part of the body is.

The Catch 22 of Research and Education in the Medical Field

It is then up to medical professionals to realize times are changing, and they need a deeper understanding of how the endocannabinoid system works. When they begin to look for research is when the trouble starts. Currently, there is very limited research surrounding the endocannabinoid system and the actual effects it has on the human body. There are loads of news stories, and anecdotal claims that suggest cannabis helps to maintain a healthy endocannabinoid system. The studies that do support this are often flawed in one way or another. Conducting scientific studies in a controlled environment without falsely altered findings would be a great first step.

Many people would agree having a not-for-profit agency conduct these studies would be the most beneficial way to potentially achieve factual results. Sadly, studies such as these can help influence medicine that is created by major corporations such as Bayer, Lily, Pfizer, and others. This means that research results could be influenced by money and power instead of factual information. It wouldn’t be the first time any of these companies would be guilty of conducting poor business practices. As for now, patients in the United States may have to worry about how their doctors view their cannabis consumption thanks to the United States Department of Health and Human Services and the US Preventive Services Task Force.