Home News The UN and WHO Agree on Rescheduling Cannabis – What are the Implications?

The UN and WHO Agree on Rescheduling Cannabis – What are the Implications? 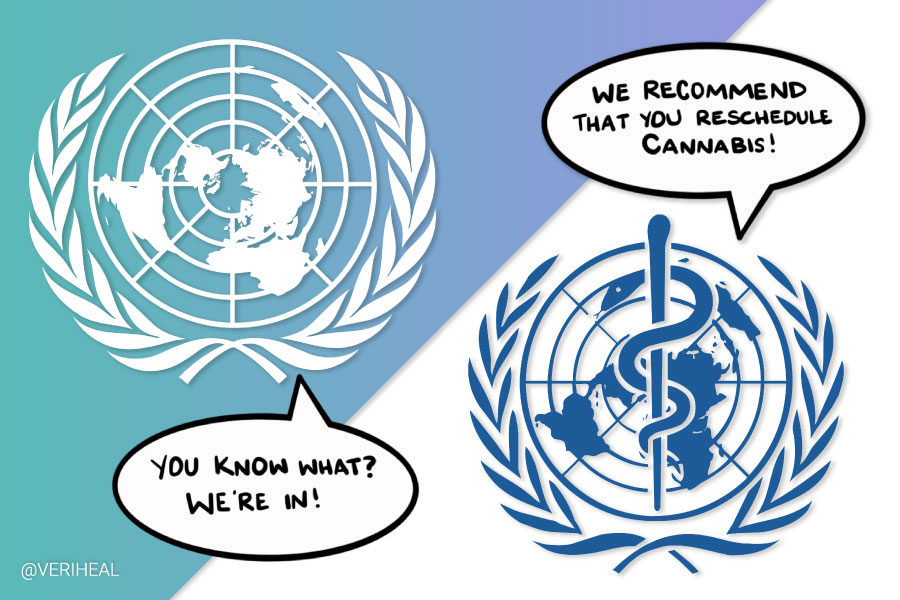 The United Nations Commission on Narcotic Drugs (CND) has accepted the World Health Organization’s (WHO) recommendation to remove cannabis from the current schedule IV listing of 1961. This historic decision comes long-overdue but well-accepted. This decision can have sweeping implications for the worldwide medical cannabis industry. One of the most important implications may be that cannabis research can be conducted on a larger scale and more in-depth in order to get a better understanding of the plant and its medical benefits. The decision was made in Vienna and was only accepted due to a slim majority of votes in favor of cannabis. There were a total of 27 votes in favor of removing cannabis from the Schedule IV drug listing, with 25 against and 1 abstention.

Who Are the CND and WHO?

The CND, or United Nations Commission on Narcotic Drugs, is the official and main drug policy-making body of the United Nations, which includes around 193 members such as Australia, Brazil, the United Kingdom, and even the United States. The CND was established by the Economic and Social Council (ECOSOC) in 1946 in order to supervise international drug control. The mandate of the CND is to “review and analyze the global drug situation, considering supply and demand reduction” and it “takes action through resolutions and decisions”.

WHO, or the World Health Organization, works with the United Nations in order to combat diseases. It was established back in 1948. The primary role of the World Health Organization is to “direct and coordinate international health within the United Nations”. WHO works with health systems including life-course, non-communicable and communicable disease, preparedness, surveillance, and response as well as corporate services.

The Single Convention on Narcotic Drugs of 1961 is an international treaty that prohibits the production and supply of specific drugs. The single convention listed cannabis as a Schedule IV (4) which is a category of drugs that are considered as having dangerous properties such as addiction which leads to serious health complications. When looking at the list of drugs on this schedule, one will see drugs like heroin and opiates. However, unlike those drugs, cannabis is far less dangerous with little to no chance of an overdose leading to death. This scheduling is not the same as the U.S Controlled Substance Act, which has schedules ranging from I to V (1-5). In the U.S Controlled Substance Act, cannabis is a Schedule I drug where it joins the ranks of substances with a high potential for abuse and no medical value such as heroin, psilocybin, LSD, methylenedioxymethamphetamine (ecstasy), methaqualone, and peyote.

When the CND accepted WHO’s recommendation to remove cannabis from the 1961 schedule IV, they acknowledged the medical utility of cannabis (finally!). The drugs and democracy program director of the Netherlands-based Transnational Institute recently noted in an interview with MJBizDaily that, “the medical cannabis wave has accelerated in recent years already, but this will give it another boost”. The votes in favor of this decision will hopefully encourage other countries to re-evaluate how cannabis is currently classified in their respective lists of narcotic drugs. However, the convention made it clear that citizens can NOT expect a sudden relaxation of international controls that govern medical cannabis.

The CND decided to accept the recommendation based on the fact that cannabis does not meet the risk profile associated with the other drugs on the list. WHO actually prepared a package of 6 recommendations for cannabis but only 1 of those were accepted- which is the decision to remove cannabis from the schedule IV listing called “recommendation 5.1”. Recommendations 5.2-5.5 received a majority of the votes against them.

What Are the Implications?

Kenzi Riboulet-Zimouli of the CND Monitor also stated in an interview with MJBizDaily that ”decades of efforts have been necessary to remove cannabis from Schedule IV, with implications that will slowly but surely be seen over the next decades”. However, we can predict that the implications of this decision will only benefit. Benefits that include the following:

Currently, medical cannabis legalization efforts, as well as research of cannabis, has been severely hindered by the harsh scheduling of cannabis on drug lists. The implications of this decision may only reveal themselves in the coming years but the decision is already one major advancement towards supporting medical cannabis legalization efforts. As those efforts are supported and boosted by authorities such as CND and WHO, countries will be encouraged to reconsider the classification of cannabis- which means to consider descheduling. By removing cannabis from the scheduling and moving towards its legalization, patients will be able to access medical cannabis with more ease and researchers will be able to make use of the botanical substances, as opposed to synthetic versions, in order to get a better understanding of the plant, how it interacts with body as well as identifying certain benefits from its consumption.

This is a major win for the cannabis community as more research is conducted in order to further eliminate controversy around its use, effectiveness, and risks. Medical cannabis has already proven, despite restricted research, that it is more effective and beneficial with lower risks compared to man-made cannabinoids and pharmaceutical medication.