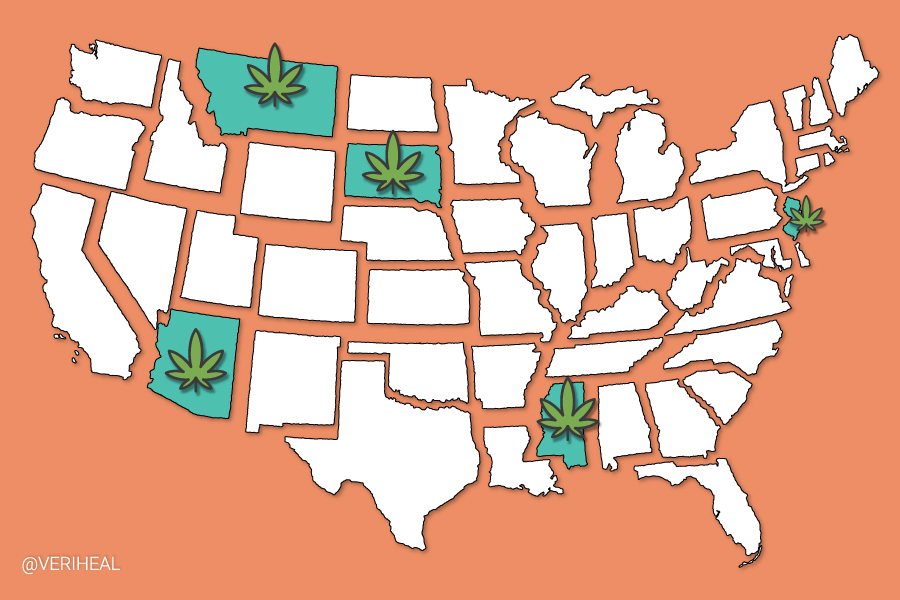 Congratulations to New Jersey, South Dakota, Mississippi, Arizona, and Montana for progressing forward with positive cannabis reform. Cannabis legalization in the form of medical and retail saw another round of victories this election with the voice and will of the people winning against those with outdated views about cannabis.

With the addition of these five states, 36 states in America now have access to high THC medical cannabis products. This is significant progress for the legal cannabis industry and community that is standing firm against lies and misconceptions of the past. Instead of debating the good and bad of cannabis with deaf ears supported by private agendas, activists are flooding the public with education about cannabis that is backed by research, science, and anecdotal reports from consumers.

The United States Has Come a Long Way

Cannabis has come a long way since the official start of draconian prohibition began with the signing of the Marihuana Tax Act of 1937 ushered in by Harry J Anslinger.  According to the U.S. Customs and Border Protection website, the official start of prohibition began as the “Marihuana Tax Act of 1937, under which the importation, cultivation, possession and/or distribution of marijuana were regulated. Among the act’s provisions was one requiring importers to register and pay an annual tax of $24. A Marihuana Tax Act stamp, affixed to each original order form and marked by the revenue collector, ensured that proper payments were made.”

This was not something that the people of the country supported. The campaign against cannabis at the time was a nasty one built on a foundation of lies, deception, racism, and greed. This campaign would go on to gain strength despite a 1944 report issued and conducted by the New York Academy of Medicine going against what the elected political officials of the time were pushing. In 1944, N.Y. Academy of Medicine issued an official statement saying, “The gateway drug theory is without foundation.”

One Man’s Blatant Disregard of Science Fueled a Downfall

Fast forward about 30 years to the ’70s, and we again see cannabis try to rise from the ashes of prohibition via the Shafer Commission Report of 1972. This report was conducted at the request of the current U.S. President of the time, Richard Nixon. The commission was supposed to paint a nasty picture of cannabis that would gain public support for eradicating the plant and the drug altogether.

Instead, the report told it how it was with news headlines of the time reading titles like, “Evils of Marihuana More Fantasy Than Fact.” The Shafer Commission report went on to support cannabis, but this didn’t go over well with Nixon, who decided to attack cannabis even further with the creation of the 1972 Controlled Substance Act. Cannabis was added to the worst possible category they had, a schedule 1 drug with no health benefits and an extremely high rate for addiction and abuse.

The Birth of the Big Five

Still, those in power had other plans for cannabis, and in these plans, cannabis had no future. Cotton quickly went on to replace hemp, becoming the fabric of our lives. Alcohol, which suffered earlier prohibition that started back on Jan 17th of 1920, was now seeing great success. The prison industry began to flourish, and the tobacco industry saw success too. Another slow-growing problem that was being born at this time was the pharmaceutical industry.

These groups would go on to help fund and support draconian cannabis prohibition for decades to come. They would also lead to some prolific concerns for America as a country that would eventually be addressed in a court of law only to receive a mild slap on the wrist. Big tobacco saw their day in court back in 1998 with the Tobacco Master Settlement Agreement. According to the American Lung Association, “The Master Settlement Agreement involves a 1998 settlement reached between the nation’s four largest tobacco companies and attorneys general from 46 states and territories.”

The lawsuit ended up costing big tobacco, or did it? The courts awarded judgment in favor of the 46 states and territories, and big tobacco was fined heavily. According to information on the ALA website, their fine was “$206 billion over the first 25 years, and the payments continue indefinitely into the future.”

Alcohol has been the center of many adverse events citing the founding of campaigns like Mothers Against Drunk Driving (MADD) and is at the source of many violent crimes and domestic violence cases. Cotton has poisoned the soils and waterways with chemicals from cultivation. And, of course, the prison industry… well, let’s just point out that as a country, America incarcerates more of its population than any other place in the world.

The Tides are Changing, and Cannabis is Surfing the Wave

Fortunately, for some Americans, times are starting to change. Laws are being passed that support the people’s will instead of private agendas that want to control how our country is governed. It has been a war on drugs and people for many years. But cannabis is finally winning the war and exposing the foundation of lies, racism, deceit, and greed that prohibition was born from.

The United States of America should be a united nation where all citizens enjoy equal freedoms. Not a divided nation that still allows people to be wrongly prosecuted and punished for freedoms enjoyed by the majority of the country. It just doesn’t make sense. It’s time for the people to unite the nation again, and this means elected leaders need to listen and lead or leave. Congratulations to New Jersey, Arizona, Montana, South Dakota, and Mississippi for their progress in bringing positive reform to cannabis laws!

I’m happy I read about this article because this is very important to move forward for all of us and the regulation of cannabis globally, apart from the business or the community.