Home News COVID-19: Another Reason to End the War on Drugs

COVID-19: Another Reason to End the War on Drugs 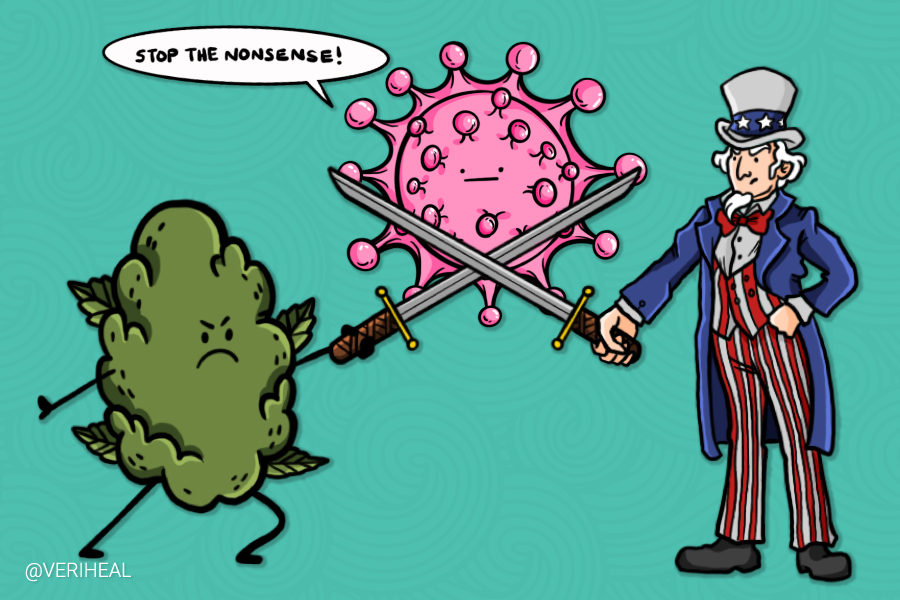 In 2018, according to statistics from drugpolicy.org, 663,367 people were arrested for cannabis-related law violations. Of the more than half a million people arrested for violating draconian laws, it is estimated that 608,775 of those people were arrested for possession alone. In 2016 United States boasted having the highest incarceration rate globally, with 2,205,300 people locked up. Nearly half a million of those, 456,000 were incarcerated for drug law violations. The War on Drugs has been a very costly one. It is estimated that the US spends around 47 billion dollars annually on the War on Drugs. Countless lives have been lost in the War on Drugs not only in the US but in places like the Philippines and Mexico as well.

The War On Drugs Affects Us All

There is no part of the War on Drugs that doesn’t affect someone even if they have minor charges. A great example is students. During the young ages of life are when people are known to try things. That does not mean they should have to pay the cost for trying something privately that affected no one else around them for the rest of their lives. Sadly, more than 200,000 students lost their federal financial aid eligibility over having drug connections. With cannabis legalization happening in more places than ever before, we would hope that the statistical numbers from those harmed by the War on Drugs would begin to drop, but this is not the case.

Continued Support of Draconian Ways from the US Government

The US federal government continues its stance supporting outdated draconian federal cannabis prohibition. Many states also sadly still brownnose the federal government by supporting them in this obsolete point of view. Americans that live in these states do not enjoy the same freedoms as other American citizens. In Oklahoma, a medical cannabis patient can have 3 oz of cannabis on their possession at any time. Cross one state line over into Texas and that same 3 oz of cannabis that one American can legally have will cost another American to spend many days in jail and possibly even prison time.

The War on Drugs Creates Unfair Risk to Cannabis Offenders

On top of that, they will spend thousands of dollars in court costs and fines. As if that wasn’t bad enough, now cannabis offenders who are incarcerated face an even scarier consequence of continued prohibition and the War on Drugs. That terrifying consequence is the possibility of contracting the hazardous virus known as Covid-19 that has taken the world hostage. COVID 19 has caused America and other countries around the world to shut down for weeks on end practically. Can you imagine how scary it would be sitting in jail because you got busted with a couple of joints and having the person next to you have Covid-19? Often low-level cannabis offenders find themselves in the same jail cells as more violent offenders guilty of crimes such as burglary, battery, and other more severe offenses. Sometimes they are even placed in the same jail cells as murderers. Is it fair to put the guy who had a couple of joints in a jail cell with a murdering convict that is sick? It’s kind of like giving a low-level offense a potential death sentence.

As of May 12th, 2020, the Federal Bureau Of Prisons reports having 169,080 inmates in BOP managed institutions. They report 2,818 of them have tested positive for Covid-19. The Federal Bureau Of Prisons also employs roughly 36,000 individuals, of whom 262 have tested positive for Covid-19. Prisons are a breeding ground for disease. There are countless cases where prisons have made media attention for having unsanitary conditions. They are a breeding ground for viruses like this and potential death sentences for those being held for minor offenses such as cannabis possession.

With cannabis legalization spreading across America, having 11 states with access to recreational cannabis, and 33 states plus the District of Columbia having access to medical cannabis, isn’t it about time we let minor cannabis offenders out of jail and expunged their charges? How is it fair for half of the country to live where they can own legal cannabis businesses and even profit from something that has someone else rotting in prison waiting for a potential death sentence from a worldwide pandemic?

Some Sit in Prison, While Others Profit from Businesses Deemed Essential During Covid-19 Pandemic

Prisons have taken acknowledgment of this concern by releasing low-level offenders in different areas. Sadly, cannabis offenders didn’t make the cut in many of these releases. This is all the more reason to look at releasing low-level cannabis offenders who are currently incarcerated. There has to be a better way than locking people up in prison to rot away while someone else profits off of them. In many places where cannabis has been legalized, dispensaries catering to medical patients are deemed essential just as other medical providers and entities such as grocery stores. However, hundreds of thousands of men, women, mothers, and fathers are serving time behind bars for something completely legal in many places today.