Traditionally, the cannabis plant is grown, trimmed, dried, and then cured before being consumed or being put on the market. Eybna Technologies, an Israeli research-focused terpene company, noticed that there is a preference for live cannabis products and then sought out to understand why. In order to gain a better understanding, the company took to studying the terpene profiles of a few cannabis plants, which revealed how the curing process can impact the terpenes found in the plant.

What are Live Cannabis Products?

Live cannabis products are explained as products that contain live resin, which is a newer form of cannabis concentrate. The live resin is produced by using a special technique that eliminates the need for the traditional drying and curing phases of cannabis cultivation. The special technique involves taking fresh cannabis flowers (the buds) and then freezing them at subcritical temperature before engaging in the extraction process.

When home-growers engage in the drying and curing phases of cannabis cultivation, they expose the already vulnerable compounds (the terpenes) to a process that could be destructive or damaging for those compounds. Many people think that losing terpenes is a good trade for acquiring the cannabinoids but the terpene content responsible for the flavors and aromas associated with cannabis. The terpenes also act as aromatherapeutic agents, offering consumers benefits of its own. Terpenes are also located in the trichomes, which has been found to be the key to potency. When the trichomes are exposed to conditions with exposure to increased heat, light, oxygen, and psychical agitation, the trichomes get devastated resulting in lesser terpenes.

The team of researchers at Eybna Technologies collected the data concerning the plant’s terpene profile through the use of their proprietary Headspace technology. The technology allows the company and its researchers to analyze the chemical makeup in flowering plants, such as the cannabis plant. Headspace technology is traditionally used in the fragrance industry in order to capture the plant’s aromatics and now Eybna Technologies has become the first to use it for researching cannabis. The Headspace technology captures the “volatile compounds” by means of “in-vivo” for “a direct collection and measurement”. The team monitors the terpene content of the plant throughout its whole life cycle, thus revealing the “great difference between the cured and live plant profiles”.

The research team studied cannabis grown in the controlled environment of a greenhouse. The researchers used their Headspace technology to collect data from multiple top colas (the buds at the top of the plant/tip of a branch) on the same plant to ensure there are minimal errors in the collected data. The study focused on monitoring patterns of terpene change throughout the plant’s life cycle. By doing that, the team is able to identify differences between cannabis plants that are cured and plants that are frozen to keep them live.

Headspace technology collected terpene compounds from the plant at three stages being (1) the fresh colas on a live plant, (2) after being dried for a week, and (3) after being dried and cured. The results of the study were able to provide information into which of the terpenes had been devastated and which has been preserved. 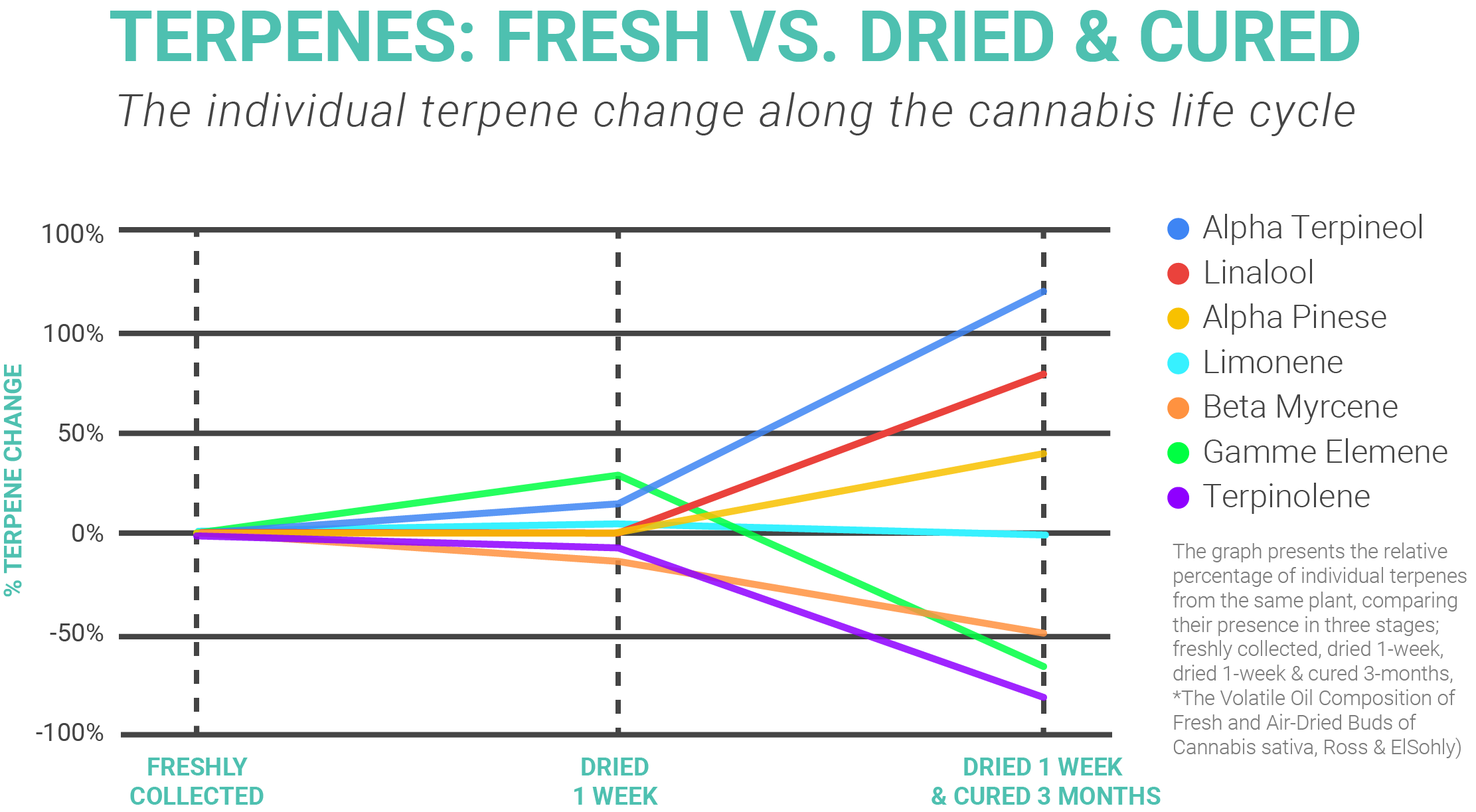 Study Results Are as Follows:

Monoterpenes are terpenes formed from two isoprene units and have ten carbon atoms (hydrocarbons such as pinene or compounds such as camphor). Monoterpenes have a lower molecular weight but a higher evaporation rate

As mentioned before, terpenes offer cannabis consumers with their own set of benefits. When drying and curing the cannabis plant, we lose out on the benefits they may have to offer since their quantity reduces in those stages. Let’s have a look at the major terpenes and their basic benefits.

The team at Eybna Technologies hopes to continue producing products that do not mislead consumers but which does offer consumers with high-quality live resin products in response to the increasing demand for it.